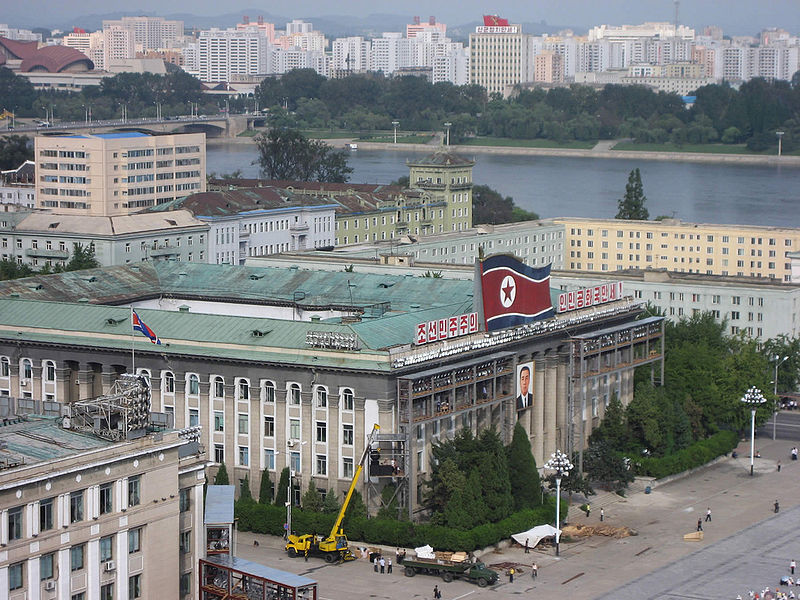 North Korea Is Walking Back War — And Pundits Are Strangely Disappointed

Pundits seem more concerned about the North driving a "wedge" between the U.S. and the South than about preventing nuclear war.
By John Feffer | January 10, 2018

In talks this week at the DMZ, South Korea welcomed the participation of North Korea in the upcoming Winter Olympics. The two countries also discussed restarting reunions of divided families and reducing tensions on the Korean peninsula. Earlier, both sides reestablished their hotline.

All of this adult conversation is a welcome change from the war of epithets between the “dotard” president of the United States and the “little rocket man” in Pyongyang.

Strange, then, that a politically diverse set of pundits in the United States has been worried only about how North Korea could use these talks to drive a wedge between South Korea and the United States.

Scott Snyder, from the Council on Foreign Relations, speculates that Kim Jong Un’s overture is a ploy to trap South Korean President Moon Jae-in “into concessions that might weaken South Korea’s alliance with the United States.” According to Danny Russel, the top Asia policy person in the Obama administration, “This is a classic united we stand, divided we fall situation. It’s always easier to maintain five party solidarity when North Korea is behaving badly.”

And from the American Enterprise Institute on the right, Nicholas Eberstadt warns that “Pyongyang regards South Korea as the weakest link in the gathering global campaign to pressure North Korea to denuclearize” and urges Seoul not to “get played.”

Then there’s the Wilson Center’s Robert Litwak, writing a piece in The New York Times entitled “A United Front Against North Korea.” Here’s the core of his argument:

We should be wary of Mr. Kim’s intentions. His gambit may be a ploy to buy time for the additional testing needed to acquire the capability to strike the continental United States. He may simply be trying to extract economic relief. Or his overture may be purely strategic, an attempt to drive a wedge between South Korea and its superpower patron, the United States.

Everything revolves around the pronoun “we.” Is Litwak speaking about himself and his family? He and the Trump administration? All Americans? All Americans and South Koreans? Or perhaps he means the entire world except for North Korea?

Well, we should be wary of all such arguments. And by “we,” let me very specific: all people who want, above all, to avoid war on the Korean peninsula.

I, for one, would be delighted if North and South Korea made an agreement that cut out the United States. That’s because the current administration in charge in Washington is absolutely, without doubt, bat-poop crazy. And I don’t have to read Michael Wolff’s latest book to make this assertion. Even if only half of Fire and Fury is accurate, it merely confirms what was previously part of the public record.

Yes, North Korea is currently ruled by a ruthless leader who maintains one of the worst human rights-abusing systems in the world. Yes, Kim Jong Un is pushing ahead with the country’s nuclear weapons program.

But on the apocalypse scale from zero (no problem) to ten (fire and fury), I’m more worried about the “button” on the desk in the Oval Office and the capacity of the Trump administration to wreak havoc in Northeast Asia.

Given this gung-ho militarism in Washington, I’d much rather see the two Koreas taking the lead in walking the peninsula back from the edge of war.

It’s all rather patronizing — as if South Korean leaders are incapable of developing policies without the assistance of their wiser elder brother in Washington. South Korean President Moon Jae-in is in fact quite capable of negotiating with Pyongyang and reassuring the Trump administration that it’s still controlling the overall dynamic. Indeed, Moon even went the extra mile by thanking Trump for making the inter-Korean talks possible (a shrewd, if inaccurate, assertion).

Let’s be honest: Of course North Korea is trying to drive a wedge between Washington and Seoul. That’s known as geopolitics, people! The United States does it all the time. What was the détente with China in the 1970s but a huge wedge that Washington attempted to drive between Beijing and Moscow?

North Korea is all about the geopolitics of the wedge. After all, it’s a weak country with not a lot of levers at its disposal. Economic pressure? Not with a GDP on the same level as Mozambique. Military intervention? Not for a really long time.

During the Cold War, Pyongyang used its relatively unusual position as an unorthodox member of the Communist world to play China off the Soviet Union and vice versa. After 1989, it tried to make separate arrangements with Japan, the United States, and South Korea, all to bolster its disadvantageous bargaining position. And now it’s using its nuclear weapons program as a way to both protect itself from attack and to lure the United States back to the negotiating table to get what it really wants.

So, yes, North Korea is using its overture to the South as a way to improve its bargaining position vis-a-vis the United States. The question is not if but why.

The abovementioned pundits imagine that North Korea needs breathing room to further develop its nuclear and missile capacities. Well, frankly, it already secured that breathing room — precisely because the United States failed, on several occasions, to negotiate more seriously to provide Pyongyang with something tangible in exchange for said nuclear and missile capacities.

What else might North Korea want? To take over South Korea? In theory, perhaps, the Kim regime believes in unifying the peninsula under the country’s putative ideology of juche. In practice, however, the regime knows that it’s completely outclassed militarily, economically, and technologically by the South. It’s like imagining Taiwan taking over mainland China.

So, what does that leave?

Number one, North Korea doesn’t want to be bombed by the United States.

Number two, it wants to be recognized as a legitimate country. That would in turn confer legitimacy on the ruling elite.

Number three, it wants access to the global economy and the capital that any serious reconstruction of industry and agriculture requires.

In a very limited way, North Korea can achieve its third goal with economic agreements with South Korea. The Kaesong Industrial Complex, which combined South Korean managerial expertise and capital with North Korean labor, was one such effort.

But in truth, to achieve these goals, North Korea needs an agreement with the United States.

So, yes, Kim’s overture to South Korea is a wedge-making effort. But more importantly it’s a way to create a dynamic that will eventually get the United States to the negotiating table.

The end game, in other words, isn’t a nuclear weapons program full stop. You can’t eat nuclear weapons. The end game is a place at the table, regionally and internationally, and for that North Korea needs to deal with the number one gatekeeper: the United States.

The Olympics, Security, and Human Rights

The Trump administration has already moderated its tone about North Korea thanks to the efforts of South Korea. In a conversation with South Korean President Moon Jae-in, Trump agreed to “deconflict” the Olympics by postponing U.S.-South Korean military exercises until after the event.

The postponement is supposed to be contingent on North Korea not conducting any further nuclear or missile tests. There have been conflicting reports that North Korea is indeed preparing another long-range missile test. Perhaps it’s only considering a rocket engine test to signal that it wants its talks but enhanced deterrence as well.

But not everyone is enthusiastic at the prospect of North Korea participating in the upcoming Olympics.

Over at the right-wing Heritage Foundation, Bruce Klingner asks why North Korea should be welcomed at the Winter Olympics if much of the world supported a boycott of apartheid South Africa. “In response to North Korea’s far more egregious human rights violations — which the United Nations has ruled to be ‘crimes against humanity’ — the world allows and even encourages Pyongyang to participate,” he writes.

But these are not parallel situations. South Africa, during the apartheid years, was a regionally destabilizing influence, but there was no DMZ, no troops on hair-trigger alert, no nuclear arsenals in play. Also, a strong movement inside South Africa supported an Olympic boycott as part of an international anti-apartheid movement.

At the time, the Heritage Foundation was not particularly enamored of the strategies proposed by this movement, preferring instead a policy of “constructive engagement” in which trade and investment in South Africa would eventually erode the apartheid system. Fortunately, the anti-apartheid movement didn’t listen to Heritage.

On the Korean peninsula, meanwhile, the risk of catastrophic war is high — whether by design or by accident. Yes, North Korea’s human rights violations are egregious. But as with the Soviet Union during the arms control era or Iran and the nuclear agreement, the nuclear risk justifies an exclusive focus on averting war. So, if inviting North Korea to the Winter Olympics can help create an environment of greater trust and engagement that can then lead all parties back to the negotiating table, it’s a worthwhile effort.

Given the lack of a movement within North Korea demanding a boycott — indeed, given the lack of virtually any non-governmental organizations inside the country — the “constructive engagement” arguments are more applicable to the Kim Jong Un regime than they ever were for apartheid South Africa.

In The Atlantic, Robert Carlin and Joel Wit offer three important examples of such engagement that the Trump administration could follow in order to build on the new inter-Korean momentum: make it easier for humanitarian organizations to operate inside North Korea, lift travel restrictions on North Korean diplomats in New York, and ask Pyongyang to grant access for Swedish diplomats (who represent American interests there) to visit the three Americans still held in North Korea.

So, let’s recap. North Korea offers to talk with South Korea and participate in the Winter Olympics. Sure, its trying to create some distance between Washington and Seoul. But that’s normal geopolitics — as opposed to the exchange of threats to launch a nuclear war. Instead of worrying about “wedges,” pundits should be overjoyed that North Korea is using its words not its weapons.

Let the Games and the next round of talks begin!