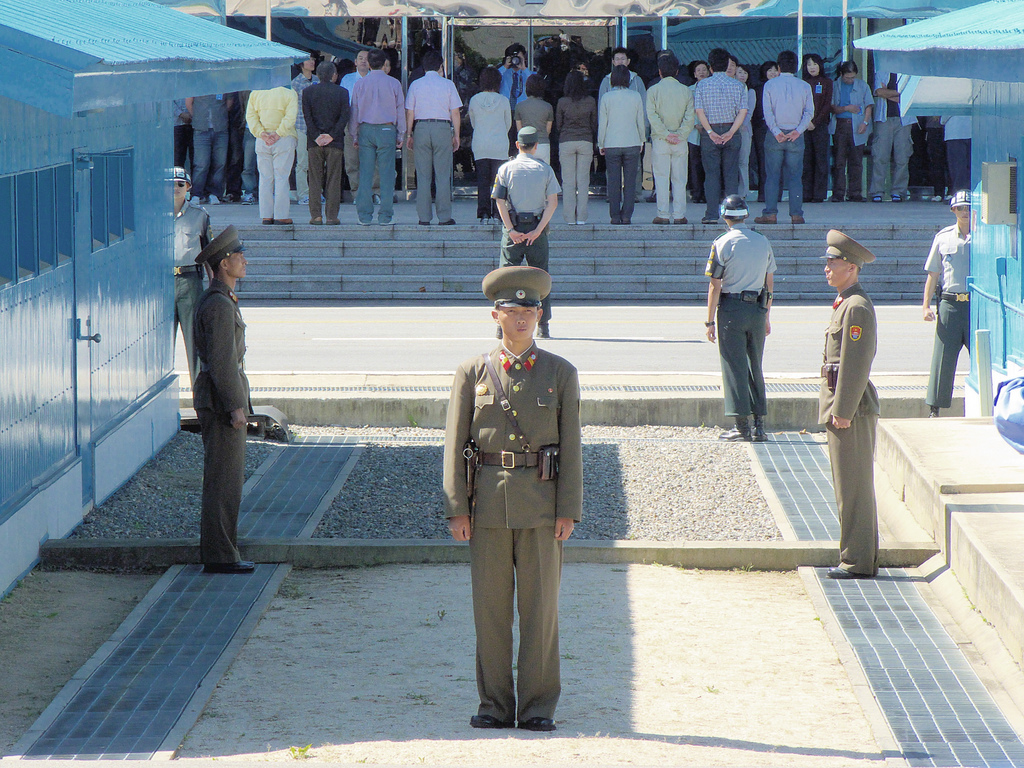 The DMZ from the North Korean side (courtesy of yeowatzup / Flickr)

South Korea should focus less on extracting apologies from North Korea and more on pursuing pragmatic projects with Pyongyang.
By John Feffer | September 7, 2015

In the famous tearjerker Love Story, a young woman dying of cancer tells her boyfriend that “love means never having to say you’re sorry.”

North Korea has generally adopted the same attitude toward South Korea, with a small twist: juche means never having to say you’re sorry.

Indeed, Pyongyang has never been very good about apologizing for its conduct. Recently, it expressed “regret” over a landmine explosion that injured two South Korean soldiers. In exchange for that expression of regret, South Korea agreed to stop blasting K-Pop and news bulletins across the DMZ, an audio barrage it had restarted after 11 years of silence.

But North Korea has been careful to point out that “regret” is not “sorry.” In other words, North Korea regrets that the incident took place but refuses to take responsibility for it or apologize.

It’s not that Pyongyang never apologizes. In 2002, Kim Jong Il officially acknowledged and apologized for the abduction of Japanese citizens in the 1970s and 1980s. “The special forces were carried away by a reckless quest for glory,” Kim said at the time. “It was regretful and I want to frankly apologize. I have taken steps to ensure that it will never happen again.”

But instead of heralding a new era in Japan-North Korean relations, the official revelation merely deepened Japan’s distrust of its neighbor.

North Korea’s ambassador to Bangladesh apologized to the country when one of his colleagues was caught last spring trying to smuggle gold out of the country. Last year, the North Korean government apologized to its own people after a building collapse in Pyongyang claimed the lives of hundreds of residents.

North Korea has even apologized, more or less, to the United States. Kim Il Sung offered his regrets after the infamous ax incident, when North Korean soldiers stopped a patrol of U.S. and Korean army personnel cutting off tree branches in the DMZ, seized their axes, and killed two U.S. officers.

North Korea has also been apologetic to the South. It took four years, but North Korea eventually apologized in 1972 for the assassination unit that tried and failed to breach South Korea’s Blue House in 1968. It expressed “deep regret” after a 1996 submarine incursion in the South resulted in a gun battle that left 24 North Korean infiltrators dead. It offered its regrets over an escalating dispute in summer 1999 over crab-fishing grounds in the West Sea, a naval clash in the same region in 2002, and the shooting of a South Korean tourist at the Kumgang Mountain resort in 2008.

But there are many incidents that South Korea still awaits some official acknowledgment and apology from the North, including the sinking of the Cheonan, which Pyongyang continues to insist that it had nothing to do with.

In general, the North Korean government doesn’t want to appear to be kowtowing to the South. It’s hard to define juche beyond its general sense of self-reliance. But it’s easy to define its opposite, sadaejuui, which translates to flunkeyism. South Korea’s “flunky” relationship with the United States is precisely the kind of dependency that North Korea wants to avoid developing with any country (and that complicates its current relationship with China). Apologies are what flunkeys do, so Pyongyang generally avoids them.

North Korea’s leadership also feels a pressing need to demonstrate that it is not weak. World leaders pay tribute to the Kim family, other countries apologize to them, and not the other way around.

It’s always possible that Seoul will manage to wring more apologies or “deep regrets” from Pyongyang in the future. But it just doesn’t make sense for the South Korean government to build a policy around such an expectation. It’s not as if expressions of regret prevent a country from engaging in such behavior again, as North Korea has demonstrated on numerous occasions.

Ultimately, North-South relations will only improve through very concrete exchanges of actions, not exchanges of words. It’s telling that even as tensions rose between North and South over the latest DMZ incidents, the two countries continued to engage in very practical exchanges. North Korea declared a state of semi-war, but North Korean workers and South Korean managers continued to manufacture various goods in the Kaesong Industrial Complex just north of the DMZ. Historians continued their investigation of the Manwoldae site of a Koryo Dynasty palace, and South Korean players participated in an international youth soccer competition in Pyongyang.

Despite their reputation in the West, North Koreans are quite pragmatic. They are often more interested than even the most committed capitalists in the bottom line. They want to see results, not rhetoric. Certainly Pyongyang produces its fair share of propaganda. And negotiators from the North have to operate within certain ideological constraints. But when it comes to concrete matters, North Koreans usually adopt a very business-like approach.

That’s why it’s important for North and South to follow up on the specific items outlined in the recent agreement, particularly the talks on divided families and the pledge to pursue more inter-Korean exchanges.

I can understand the importance of apologies. Victims want some acknowledgment of their suffering. Governments want to be able to demonstrate that they are advocating effectively on behalf of their citizenry. But insisting on apologies from North Korea is like trying to import high-grade sushi from a landlocked country. You’re knocking on the wrong door. North Korea just doesn’t do apologies very well.

So, let’s just take their “regrets” and move on to the business of inter-Korean cooperation. Maybe when there’s a little more love between North and South, there won’t be as much of a need for apologies.