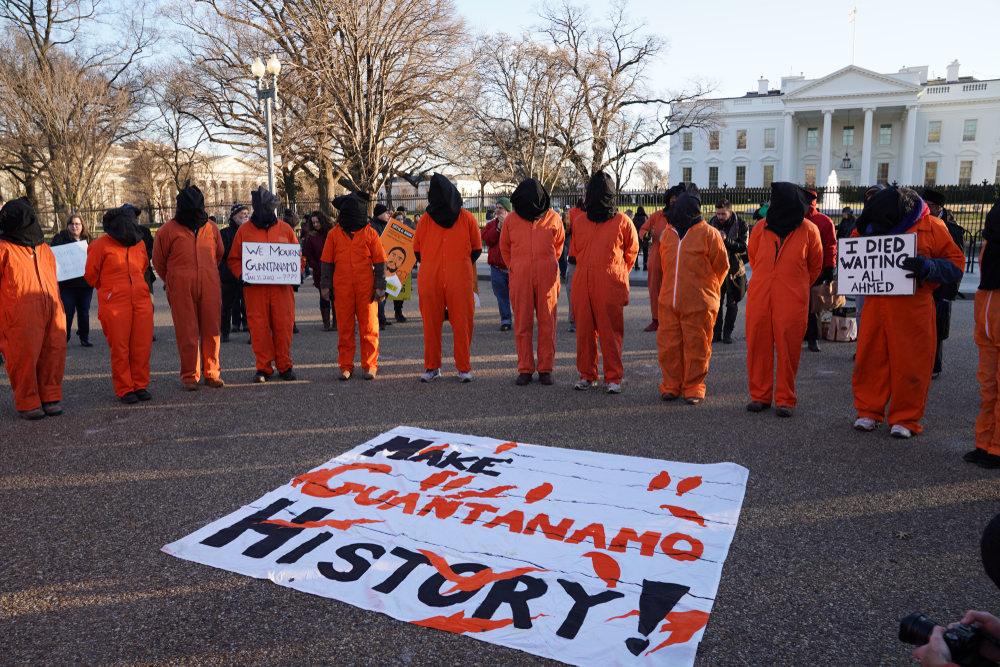 Members of the group Witness Against Torture protest against the Guantanamo Bay prison outside the White House, 2019. (Shutterstock)

Biden is right to end the forever war in Afghanistan. Now he needs to close the forever prison that it built.
By Farrah Hassen | September 1, 2021

I was a college student on 9/11. The ensuing “War on Terror,” anchored by the bombing and U.S. occupation of Afghanistan, has been with us ever since — virtually my entire adult life.

President Biden was right to end the war in Afghanistan and follow through on a deal that his predecessor Donald Trump had negotiated with the Taliban. As Biden explained, “After 20 years, I’ve learned the hard way that there was never a good time to withdraw U.S. forces.”

Although the fighting in America’s longest war may have ended, Biden must address the war’s lingering wounds to the people of Afghanistan and to our own country’s ideals of justice and the rule of law.

First and foremost, the U.S. needs to provide adequate humanitarian aid and buttress refugee resettlement efforts. The Afghan people undoubtedly bore the brunt of the war’s costs. Nearly 50,000 civilians have been killed and poverty is widespread, with 90 percent of the population living on less than $2 a day.

Another remnant of the war lies far from Afghanistan on the southeastern end of Cuba.

The prison facility located on the U.S. military base at Guantánamo Bay (Gitmo) is a glaring reminder of the war’s human rights failures and damage to the rule of law. Then-President Bush created the prison in January 2002 to house exclusively Muslim men captured in the “War on Terror.”

As with the Afghan war, Biden must ensure that the prison never sees its 20th anniversary. The indefinite detention of prisoners at Gitmo without charge or trial, and the documented acts of their torture and mistreatment, tarnish America’s global standing.

“Guantánamo was designed to bypass the Constitution and the U.S. criminal justice system,” writes Omar Ashmawy, a former military prosecutor at Gitmo. “It failed because that idea is contrary to American principles.” Keeping it open is not an option.

During the course of the war, the U.S. held around 220 Afghans at Gitmo along with nearly 600 other detainees. Many were transferred there from the notorious U.S. prison at Bagram airbase in Afghanistan.

Of the roughly 800 original detainees, the 39 that still remain have almost all been imprisoned for 15 years or more, and only seven are facing active charges. The New York Times has calculated that each Gitmo prisoner costs $13 million a year.

Ashmawy has called for closing the prison. So have over 100 human rights organizations, 24 senators, and 75 members of the House of Representatives. Of the remaining detainees, some could be tried in federal courts and others already cleared for release should be repatriated to their home countries if possible or resettled in third countries with security guarantees.

When teaching my undergraduate course on international law, my students are always stunned and horrified to learn of the countless human rights abuses at Gitmo and rightfully question why it remains open.

They learn how even the Supreme Court rebuked the denial of detainees’ fundamental due process rights more than once — including in the 2006 Hamdan v. Rumsfeld ruling, which held that the military commissions used to try detainees violated both U.S. law and the four Geneva Conventions.

The brutal war and subsequent barbarous treatment of Guantánamo detainees drove me to dedicate my career to promoting human rights. My hope is that both provoke others to speak out as well.

As we approach the anniversaries of this “forever war” and its “forever detainees,” we must remember the lessons of these past two decades and reclaim America’s humanity.

Farrah Hassen, J.D., is a writer, policy analyst, and adjunct professor in the Department of Political Science at Cal Poly Pomona.