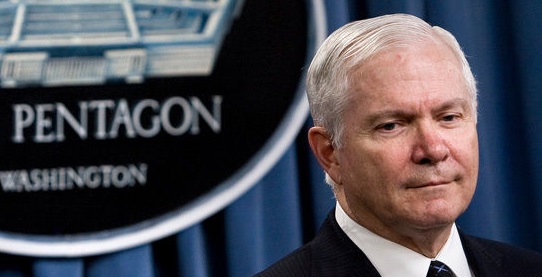 Now’s Not the Time to Go Soft on Robert Gates

Robert Gates may have been the antidote to Donald Rumsfeld and written an honest memoir, but he was also integral to stoking the fire of U.S. hostility toward Iran.
By Russ Wellen | April 1, 2014

Many breathed a huge sigh of relief when George Bush appointed Robert Gates secretary of defense. Compared to Donald Rumsfeld, who he replaced, he seemed like the voice of sanity. Then, he authored a much-praised memoir, Duty: Memoirs of a Secretary at War (Knopf, 2014), in which, for example, he wrote of the Afghanistan War that President Obama “doesn’t trust his commander, can’t stand Karzai, doesn’t believe in his own strategy and doesn’t consider the war to be his. For him, it’s all about getting out.”

Thus did he become another voice, as well: that of frankness in politics. But lest his history become revisionist, we need to remind ourselves of just who Robert Gates was before his image was sanitized.

Many are aware of his involvement in Iran-Contra. Besides advocating bombing Nicaragua to remove the Sandinista government while Deputy Director of Intelligence for the CIA, as Gareth Porter writes in his essential new book Manufactured Crisis: The Untold Story of the Iran Nuclear Scare (Just World Books),

Gates had been [CIA Director William Casey’s] close ally during the Iran-Contra affair and one of the few Reagan administration officials who knew about the 1985 US offer of arms to Iran in return for the release of US hostages held in Lebanon that later morphed into a way to funnel arms to the Nicaraguan Contras.

Gates was called to testify by the independent counsel looking into the affair, and, though he wasn’t indicted, he was forced to withdraw his name from nomination for CIA director in 1987. He lived to fight another day and turned his animosity toward Iran, partly, as we’ll see, because of his bitterness about the outcome of Iran-Contra. First, Porter explains how, in need of a new enemy to mobilize its resources against with the Cold War winding down, the CIA turned up the heat on Iran.

For their part, though, President George H.W. Bush and National Security Adviser Brent Scowcroft, Porter writes, demonstrated an interest in normalizing relations with Iran. But other members of the administration objected on the grounds of a new round of Iran-backed terrorism, such as the assassination of an Iranian national by Iranian agents in Connecticut (which you probably never heard about because it didn’t actually occur). Porter writes:

It is no accident that the characterization of Iran as a sponsor of terrorism and a WMD proliferator began to surface immediately upon the return of Robert Gates as CIA director. [Just two weeks later] a “senior administration official” was quoted in the Los Angeles Times as saying that relations with Iran would remain in the “deep freeze,” mainly because of Iran’s “continued support of for international terrorism” and its pursuit of WMD capabilities.

In testimony before the Senate Armed Services Committee in January, Gates provided a litany of charges against Iran [such as] that Tehran was continuing to “support terrorism as an instrument of state policy, despite its role in securing the release of the hostages [in Lebanon]” and that it had “embarked on an ambitious effort to develop its military and defense industries, including programs for weapons of mass destruction.”

A few months later, he declared

… that Iran “is developing a capability to produce weapons of mass destruction” and “seeking to acquire a nuclear weapons capability.” … he reminded the committee members that Iran “has not abandoned the goal of one day leading the Islamic world and reversing the global dominance of Western culture and technology.”

A national intelligence estimate (NIE) on Iran completed … three weeks before Gates returned to the CIA as director, has since been declassified, and it concluded that President Rafsanjani’s foreign policy had reflected … that Iran had been “gradually turning away from the revolutionary excesses of the past decade … toward more conventional behavior.”

… cited both the “grave weakness” of the Iranian economy and the fact that Iranian military forces had “limited capabilities” [and that] Iran was “unlikely to conduct terrorism directly against U.S. or Western interests during the next two years, but is supporting radical groups that might do so.”

… both President Rafsanjani and Supreme Leader Khamenei believed that Iran’s interests lay in better relations with the West.

Why exactly was Gates so eager to prevent an improvement of relations with Iran? One explanation for his hostility toward Iran was that he blamed then-president Rafsanjani for having revealed the 1986 secret visit of National Security Council staff to Iran to facilitate the Iran-Contra plan. As Porter writes: “Now Rafsanjani was making another bid for an opening to the United States, and Gates was evidently eager to shoot it down.” Iran-Contra, of course, almost ended Gates’s career.

Glad you were the antidote to Rumsfeld, Gates. Whether or not that redeemed yourself for Iran-Contra and keeping the pressure on Iran for no good reason, we’ll let history decide. In the meantime, if you want the truth about how the United States and Israel worked to convince the world that Iran is developing nuclear weapons when there’s no truth to the charge, you owe it to yourself to read Gareth Porter’s Manufactured Crisis.  Even for those in the know, his book is full of surprises.