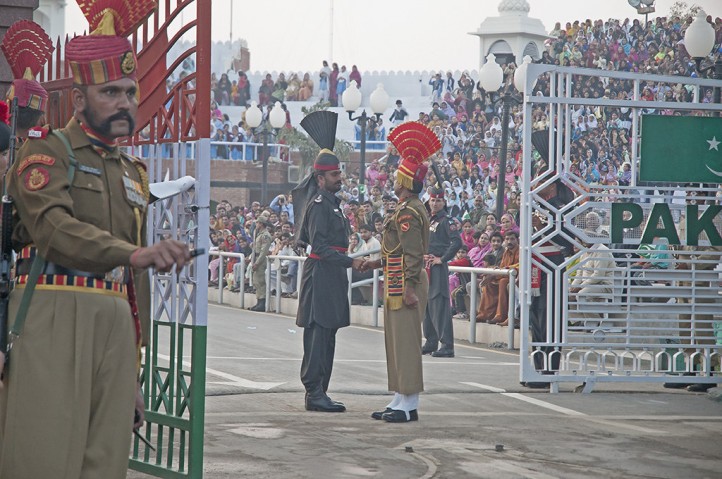 The recent military clash between India and Pakistan underscores the need for the major nuclear powers — the U.S., Russia, China, Britain, and France — finally to move toward fulfilling their obligations under the 1968 Nuclear Non-Proliferation Treaty (NPT).

The Treaty’s purpose was not simply to prevent the spread of nuclear weapons, but to serve as a temporary measure until Article VI could take effect: the “cessation of the nuclear arms race at an early date and to nuclear disarmament, and on a Treaty on general and complete disarmament under strict and effective international control.”

The 191 countries that signed the NPT — the most widely subscribed nuclear treaty on the planet — did so with the understanding that the major powers would de-nuclearize. But in the 50 years since the Treaty was negotiated, the nuclear powers have yet to seriously address eliminating weapons of mass destruction.

While over the years the Americans and the Russians have reduced the number of warheads in their arsenals, they — along with China — are currently in the midst of a major modernization of their weapon systems. Instead of a world without nuclear weapons, it is a world of nuclear apartheid, with the great powers making no move to downsize their conventional forces.

For non-nuclear armed countries, this is the worst of all worlds.

There Are No “Local” Nuclear Wars

The folly of this approach was all too clear in the recent India and Pakistan dustup. While both sides appear to be keeping the crisis under control, for the first time in a very long time, two nuclear powers that border one another exchanged air and artillery attacks.

While so far things have not gotten out of hand, both countries recently introduced military policies that make the possibility of a serious escalation very real.

On the New Delhi side is a doctrine called “Cold Start” that permits the Indian military to penetrate up to 30 kilometers deep into Pakistan if it locates, or is in pursuit of, “terrorists.” On the Islamabad side is a policy that gives front-line Pakistani commanders the authority to use tactical nuclear weapons.

The possibility of a nuclear exchange is enhanced by the disparity between India and Pakistan’s military forces. One does not have to be Carl von Clausewitz to predict the likely outcome of a conventional war between a country of 200 million people and a country of 1.3 billion people.

Pakistan reserves the right to use nuclear weapons first. India has a “no first use” policy, but with so many caveats that it is essentially meaningless. In brief, it wouldn’t take much to ignite a nuclear war between them.

If that happens, its effects will not be just regional. According to a study by the University of Colorado, Rutgers University, and UCLA, if Pakistan and India exchanged 100 Hiroshima-sized nuclear warheads (15 kilotons), they would not only kill or injure 45 million people, but also generate enough smoke to plunge the world into a 25-year long nuclear winter.

Both countries have between 130 and 150 warheads apiece.

Temperatures would drop to Ice Age levels and worldwide rainfall would decline by 6 percent, triggering major droughts. The Asian Monsoon could be reduced by between 20 and 80 percent, causing widespread regional starvation.

Between the cold and the drought, global grain production could fall by 20 percent in the first half decade, and by 10 to 15 percent over the following half decade.

Besides cold and drought, the ozone loss would be between 20 and 50 percent, which would not only further damage crops, but harm sea life, in particular plankton. The reduction of the ozone layer would also increase the rate of skin cancers.

The study estimates that “two billion people who are now only marginally fed might die from starvation and disease in the aftermath of a nuclear conflict between Pakistan and India.”

In short, there is no such thing as a “local” nuclear war.

Article VI is the heart of the NPT, because it not only requires abolishing nuclear weapons but also addresses the fears that non-nuclear armed nations have about the major powers’ conventional forces.

A number of countries — China in particular — were stunned by the conventional firepower unleashed by the U.S. in its 2003 invasion of Iraq. Though the U.S. occupation of Iraq took a disastrous turn, the ease with which U.S. forces initially dispatched the Iraqi army was a sobering lesson for a lot of countries.

In part, it is the conventional power of countries like the U.S. that fuels the drive by smaller nations to acquire nuclear weapons.

Libya is a case in point. That country voluntarily gave up its nuclear weapons program in 2003. Less than seven years later Muammar Gaddafi was overthrown by the U.S. and NATO. At the time, the North Koreans essentially said, “we told you so.”

But it is hard to make a case for non-proliferation when the major nuclear powers insist on keeping their nuclear arsenals. And one can hardly blame smaller countries for considering nuclear weapons as a counterbalance to the conventional forces of more powerful nations like the U.S. and China. If there is anything that might make Iran abandon its pledge not to build nuclear weapons, it’s all the talk in Israel, the U.S., and Saudi Arabia about regime change in Tehran.

There are specific regional problems, the solutions to which would reduce the dangers of a nuclear clash.

The U.S. has taken some steps in that direction on the Korean Peninsula by downsizing its yearly war games with South Korea and Japan. Declaring an end to the almost 70-year-old Korean war and withdrawing some U.S. troops from South Korea would also reduce tensions.

Halting the eastward expansion of NATO and ending military exercises on the Russian border would reduce the chances of a nuclear war in Europe.

In South Asia, the international community must become involved in a solution to the Kashmir problem. Kashmir has already led to three wars between India and Pakistan, and the 1999 Kargil incident came distressingly close to going nuclear.

This latest crisis started over a February 14 suicide bombing in Indian-occupied Kashmir that killed more than 40 Indian paramilitaries. While a horrendous act, the current government of India’s brutal crackdown in Kashmir has stirred enormous anger among the locals. Kashmir is now one of the most militarized regions in the world, and India dominates it through a combination of force and extra-judicial colonial laws — the Public Safety Act and the Special Powers Act — that allows it to jail people without charge and bestows immunity on the actions of the Indian army, the paramilitaries, and the police.

Since 1989, the conflict has claimed more than 70,000 lives and seen tens of thousands of others “disappeared,” injured, or imprisoned.

India blames the suicide attack on Pakistan, which has a past track record of so doing. But that might not be the case here. Even though a Pakistani-based terrorist organization, Jaish-e-Mohammad (JeM), claims credit, both sides need to investigate the incident. It is not unlikely that the attack was homegrown — the bomber was Kashmiri — although possibly aided by JeM. It is also true that Pakistan does not have total control over the myriad of militant groups that operate within its borders. The Pakistani Army, for instance, is at war with its homegrown Taliban.

The Kashmir question is a complex one, but solutions are out there. The United Nations originally pledged to sponsor a plebiscite in Kashmir to let the local people decide if they want to be part of India, Pakistan, or independent. Such a plebiscite should go forward. What cannot continue is the ongoing military occupation of 10 million people, most of whom don’t want India there.

Kashmir is no longer a regional matter. Nuclear weapons threaten not only Pakistanis and Indians, but, indeed, the whole world. The major nuclear powers must begin to move toward fulfilling Article VI of the NPT, or sooner or later our luck will run out.