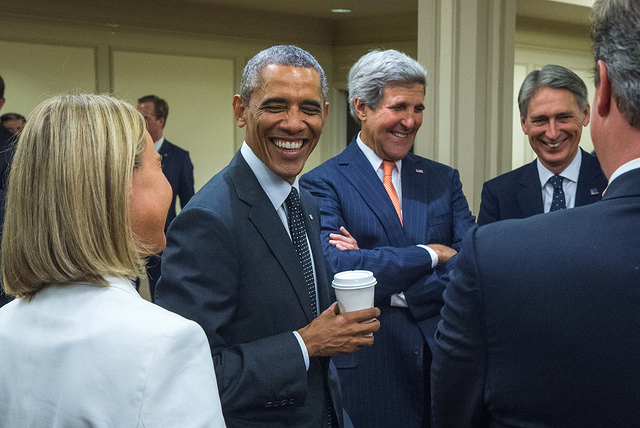 There have been and will be other days to criticize President Obama, but today he deserves praise. Pictured with Secretary of State John Kerry, chief U.S. negotiator of the Iran deal. (Photo: U.S. State Dept.)

Obama and the Iran Nuke Deal: Giving Credit Where Credit Is Due

There have been and will be other days to criticize Obama. After all, he is Commander-in-Chief of the world’s most expansive military and imperial power. But today he deserves full praise and great respect. It is a monumental achievement to keep the US on track with other world powers and Iran toward peaceful resolution of differences rather than resort to war.

No President has encountered fiercer resistance from a hawkish chorus in Congress, including within his own party. The political winds in Washington and in Israel blow against any international agreement with Iran, against any change of course in US policy away from our failed reliance on military force.

Obama has persisted. Today he made his case to the American people with logic and clarity. Implicit was something more important than the specifics of a “deal.” If the US can cooperate in this matter with Russia, China, Germany, France and Britain, why not elsewhere where tensions risk conflict and war? Instead of freezing our outlook on the world in terms of whom Washington perceives as “ally” and whom as “foe”, why not recognize areas of common interest that make negotiation over difficult problems necessary and viable.

There are winds across the globe other than the blowhard rhetoric of Netanyahu and his Congressional cheering section. No doubt the Iran negotiations are progressing because most of the world abhors the prospect of more war. Even our European “allies” have become wary of aggressive and risky US behavior. As Obama indicated today, if the US were to back off from a developing agreement with Iran, it would separate itself from the other major powers who are party to the negotiations.

If our people refuse to be stampeded by a reckless hawkish outcry, today may mark a significant step toward a less war-oriented foreign policy. The alternative is increasing alienation from the rational world community, sharing the isolation and opprobrium that is mounting against Netanyahu’s colonialist regime.