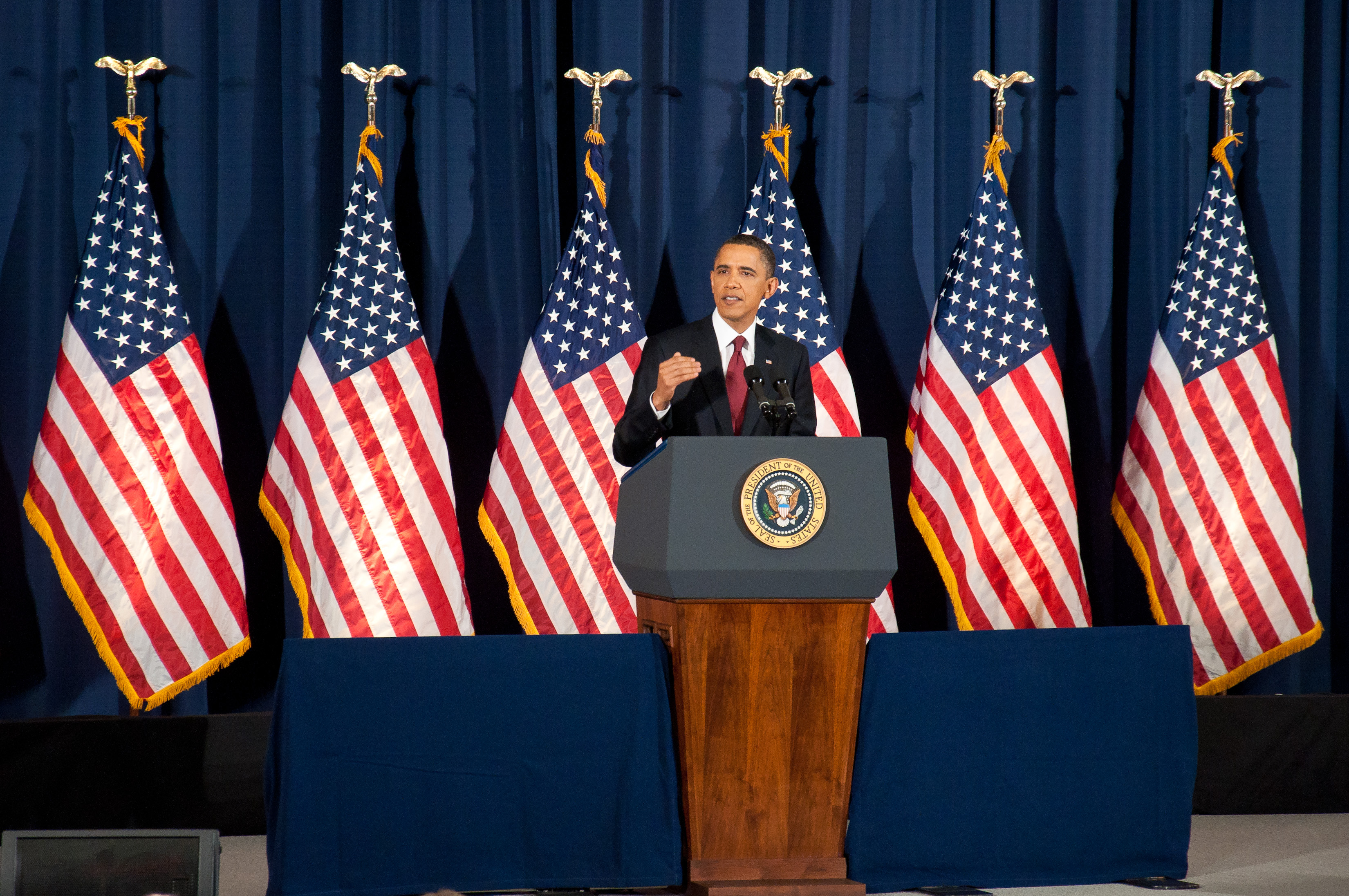 The United States is not Atlas, and the U.S. president is not a Helmsman. (Photo: Wikipedia)

Is Obama Really Adrift in the World?

Four myths American exceptionalists peddle about the U.S. president and America's role in the world.
By John Feffer | July 30, 2014

For all the hands shaken and hamburgers eaten, President Obama has never quite shaken his reputation for detachment.

He is the “cool” president who doesn’t lose his temper even when he should. He is the former constitutional law professor who is too “academic” for the Oval Office. He uses his brain when he should be relying more on other body parts: guts, heart, cojones. He surrounds himself with a small coterie of friends and lacks the common touch.

All of this is nonsense, of course—the kind of stuff that has made People magazine and Entertainment Tonight into reference guides even inside the Beltway. Our celebrity culture has turned us all into armchair therapists who put even our president on the couch to analyze his personality flaws.

But when the label of “detached” acquires a political spin, it’s no longer just nonsense. It becomes dangerous. I’m not talking here about all the criticisms the left and right have leveled against Obama for not visiting the border and addressing the immigration crisis on his recent trip to Texas.

I’m talking foreign policy. It has become all too common, with crises spiraling out of control in Gaza, Iraq, Ukraine, and elsewhere, to criticize the U.S. president for making his personal style of detachment into a national policy of disengagement.

Fred Hiatt, the editorial page editor of The Washington Post, is the latest analyst to jump on the pile. In “An Experiment Gone Wrong,” Hiatt lambastes the president for failing to support the Arab Spring movements, leaving the Syrian rebels in a lurch, withdrawing all U.S. troops from Iraq, and not building up U.S. forces in Europe to stare down the Russkies.

“Obama thought he could engineer a cautious, modulated retreat from U.S. leadership,” Hiatt writes. “What we have gotten is a far more dangerous world.”

Nothing Hiatt writes is particularly new. Obama has sustained numerous critiques from the right—from Sen. John McCain (R-AZ) in particular—for not implementing a more aggressive foreign policy. The left has chided the president for not providing more support for nonviolent democracy movements in the Arab world. I’ve certainly added my own voice of criticism for the strategic choices Obama has made over the years, such as his reluctance to cut ties with Hosni Mubarak in Egypt or his refusal to pressure the Bahraini government to accede to demands from its own democracy movement.

Yes, U.S. foreign policy suffers from a variety of maladies at the moment. But the diagnosis that Hiatt provides—and which his co-opinionist Charles Krauthammer voices far more splenetically—is way off base. The problems that beset Washington’s foreign policy apparatus have little to do with disengagement, at least not the variety that so disturbs Hiatt and other proponents of the Great Helmsman view of presidency. They want Obama to steer the state with a firmer hand, like Ronald Reagan, but they actually sound a lot like Chinese nostalgic for Mao or Russians pining for an iron fist. Damn the niceties of democracy and self-determination, they seem to be saying, and full speed ahead—toward leadership!

Here are the four principal myths propagated by Hiatt and the Helmsmen:

1)   The United States has disengaged from the world.

The United States remains highly engaged in the world as the top arms exporter, the mover and the shaker behind institutions as diverse as NATO and the World Bank, and the promoter of democracy in certain places (Burma, China) but not others (Egypt, Saudi Arabia).

Obama has done nothing to change the U.S. stance in this regard; in fact, he has only accelerated these trends. He has even upped the ante in the Pacific by in pushing hard for both a new military base in Okinawa against the wishes of the residents and a new regional trade agreement at the behest of the corporate community.

In the current crisis in Gaza, the Obama administration continues to be quite engaged—both as the main supporter of Israel and as a putative mediator. Indeed, anyone with a scrap of experience in conflict resolution would immediately point out that the United States is over-engaged on this issue. From a purely professional point of view, it should make a choice between providing Israel with the means to continue its war against Hamas and trying to find a solution to the overall Arab-Israeli conflict.

Where the United States is less engaged—on climate change, UN reform, boosting global anti-poverty programs, negotiating with recalcitrant countries like North Korea—Hiatt and the Helmsmen would probably praise this strategic aloofness. Engagement, for them, is not really about diplomatic overtures and playing well with others. It’s telling others what to do and punishing them if they disobey.

When they say “engage,” they are thinking primarily of the Pentagon. The Helmsmen make the common mistake of assuming that boots on the ground and bombs from the air are the only true marks of U.S. engagement in the world.

2)   Boots on the ground and bombs from the air are the only way to stabilize an increasingly unstable world.

If the U.S. military were a force for stability in the world, then Afghanistan and Iraq would look today like Denmark and Finland. Instead, they are close to the top of every list of most dangerous countries in the world. Washington sent hundreds of thousands of troops to those countries and rained down terror from the skies, and now everyone is surprised that these are not stable democracies?

Stability, after all, was not the stated objective in Iraq and Afghanistan. U.S. troops were there to fight terrorism (even if this rationale turned out to be bogus in the case of Iraq). Hiatt and the Helmsmen mistakenly believe that fire fights fire. But our fire has only fed the fire. The Taliban is stronger than ever in Afghanistan. And al-Qaeda has spawned any number of follow-on mutations from Boko Haram to ISIS.

Even where humanitarian concerns are the putative reason for intervening, stability has not been the ultimate result. McCain, along with any number of liberal interventionists, urged the Obama administration to use force in Libya. Given how close Muammar Gaddafi was to implementing an Assad-like crackdown in Benghazi, a case could certainly be made for a multilateral humanitarian intervention.

But however you might feel about that particular intervention, no one today would mistake Libya for Club Med. The Pentagon is not in the business of spreading fairy dust on countries and turning them into the next hot location for American tourists.

3)   The United States—and by extension the U.S. president—can change the facts on the ground at will.

Long before the Ukraine crisis broke, the Obama administration was leaning on NATO countries to increase their military spending—at least to 2 percent of their GDP. The only country to do so consistently has been Britain. Europeans in fact have been decreasing their spending and balking at their contributions to the operations in Afghanistan.

Moreover, most of Western Europe was perfectly happy to cultivate better relations with that giant oil and gas company known as Russia. The United States, meanwhile, was reducing its military presence in Europe for very good reasons: the Cold War ended a quarter century ago, and many bases in Western Europe were rendered superfluous with the drawing down of combat operations in Afghanistan.

Do Hiatt and the Helmsmen really think that Putin’s moves in Ukraine would have been any different if Obama had convinced his allies somehow to beef up their NATO commitments and station more U.S. troops on their territories? Nothing that the George W. Bush administration did—and it certainly can’t be accused of being pacifist in its tendencies—dissuaded Putin in Georgia or Moldova.

Should the United States have kept troops in Iraq? That’s a moot point. Iraqis overwhelming supported their withdrawal. Iraqi Prime Minister Nouri al-Maliki didn’t even want to keep 3,000 trainers because the Status of Forces Agreement would have given them immunity from local prosecution.

Could the United States have tipped the balance in Syria? If Obama had pushed for an all-out military effort to topple the tyrant and impose democracy, Assad might be sitting at The Hague tribunal at the moment. But there was very little support for such an option in the United States. If the president had somehow pushed through a much larger package of military support, the rebels might be in a better strategic position, but the country would still be stuck in a horrific civil war.

A Marshall Plan for the Arab Spring countries and an Apollo-like program to boost carbon-neutral technologies are both admirable ideas. But they’re not the stuff of executive orders. They’re huge, complex programs that require considerable legislative commitment. And Obama has had very little in the way of congressional assistance on his foreign policy. The deal on the new START, for instance, required a huge give-away on nuclear modernization to Jon Kyl (R-AZ), who ended up voting against the nuclear arms control treaty anyway.

For all its military and economic power, the United States has limits on what it can do to change “facts on the ground.” And what applies to America in the world goes double for the president’s ability to impose his will on policy inside the Beltway.

It we’re going to make grand generalizations, we might as well say that U.S. engagement has left chaos in its wake, as the interventions in Afghanistan, Iraq, and Libya suggest. The truth is, U.S. actions contribute to a wide variety of outcomes, and it’s more often how we engage or disengage that is critical.

Look at the situation in Latin America. In those countries where we poured money, weapons, and military advisors in wars against leftist insurgents—in El Salvador, Guatemala, Honduras, and Nicaragua—the countries are struggling with the horrific legacy of violence. It’s gotten so bad that families are willing to send their children unaccompanied and at great risk to the United States just to avoid early death at home. Here is a case of irresponsible disengagement, for after doing so much to stoke the conflicts, the United States did little to ensure that these countries would thrive in the post-conflict environment.

But in other parts of the region—Chile, Argentina, Brazil—the absence of U.S. involvement has allowed societies to prosper. U.S. disengagement from that part of the region, as it turned to focus on other parts of the world, created space for these countries to build up their economies, strengthen their democracies, and create a new web of South-South connections.

Yes, there are radical isolationists in the United States. And there are neocons that want the United States to reestablish some putative golden age of neo-imperial control. The real debate, however, takes place between these poles—where the United States should critically engage (for instance, to reduce carbon emissions) and responsibly disengage (closing military bases).

The United States is not Atlas, and the U.S. president is not a Helmsman. Atlas is not shrugging; Obama is not nodding.

Instead of these false dichotomies between blundering engagement and irresponsible disengagement, let’s have a real debate about where the United States can make a difference given its resources, how President Obama can have a positive impact given his circumscribed influence, and why the American colossus should continue to rein in its unilateralist tendencies, given the declining utility of force and the overriding need for global cooperation.