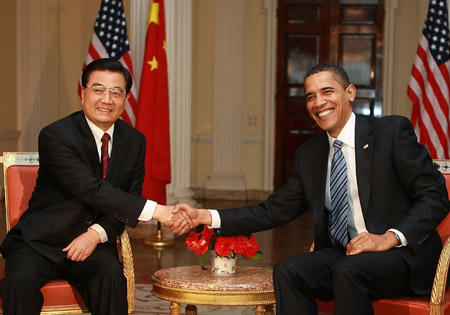 Samuel Huntington wrote: “In the emerging world of ethnic conflict and civilizational clash, Western belief in the universality of the Western culture suffers three problems: it is false; it is immoral; and it is dangerous.”
By Keith K C Hui | February 18, 2014

The opinions expressed are those of the author, and not necessarily those of Foreign Policy in Focus.

On the next day after President Barack Obama delivered his State of the Union (SOTU) 2014, which did not mention anything about the tension in East Asia, not even the Trans-Pacific Partnership, the Tokyo-based The Diplomat published an article to ask whether Obama “has abandoned the Pivot to Asia”1:

… he couldn’t make room for even a sentence in his speech … his neglect of these issues … brings the rebalance to Asia into question.2

While the disappointment and frustration within the hawkish camp are understandable, Obama’s silence on East Asia as well as two exact same headlines with respect to the SOTU in Army Times and Navy Times — “Obama emphasizes diplomacy to strengthen security” — indicate that the incumbent master of the White House has made a wise move to prevent a disastrous “clash of civilizations.”3   In his renowned 1997 book of the same name, Samuel P. Huntington sees the states in “the West” as a civilization group sharing among themselves such core values as democracy, pluralism, individualism, rule of law and Christianity; some other civilizations, such as the Muslim and the Chinese, however, do not appreciate these values and tend to resist them.4

Aside from his worry over the divide between the Western and Muslim states, Huntington foresaw a similar problem from China: “A more dangerous source of a global intercivilizational war is the shifting balance of power among civilizations and their core states. If it continues, the rise of China and the increasing assertiveness of this ‘biggest player in the history of man’ will place tremendous stress on international stability in the early twenty-first century.” [Note 4: p.312] What is worse is that the clash between the confrontational civilizations would engage the states into a type of “off-again-on-again” fault line wars. “Fault line wars … are by definition between two groups which are part of larger cultural entities. In a fault line war … Group A1 is fighting Group B1 and each will attempt to expand the war and mobilize support from civilization kin groups, A2, A3, A4, and B2, B3, and B4 … hence the internationalization of fault line conflicts.” [Note 4, p253-4]

China itself is a self-sufficient civilization state in the sense that it is an atheist nation pursing the Confucian ideal Xiaokang (a moral society with modest living standard) through a unique China Model (socialism with Chinese characteristics—coexistence of free market and state-owned enterprises) and a non-democratic political power succession mechanism (rotational Helmsman Ruler System).  The national leaders, generation after generation, have been following through the directions set by Deng Xiao-ping to stick to socialism on the one hand and striving to garner economic growth on the other. The distinctive features of its non-Western operational models have simultaneously generated a well-justified suspicion that the rise of China may pose some threats in one way or the other to the West. At the hearing of the Seapower and Projection Forces Subcommittee of the House Armed Services Committee on Dec. 11, 2013, four experts urging a grand and cohesive strategy to deal with the threat from China is one of the typical representations of this mode of thinking.5

While Japan, the Philippines, India and even Vietnam are trying to drag the U.S. into this region to contain the threat in a more concrete way, the deterrence has escalated into a tension with strong jingoistic smell. The combat fire, once ignited, would have no return because the recalls of the historical wounds, the exclusive claims over territories and the irrational abuses of ethnical differences will transform the fights into a hate war between cultures and civilizations. These fault line wars, if joined by North Korea, Iran and Pakistan, will last a long, long time.  Aside from the formal battles between the disciplined forces, commercial boycott and ethnic cleansing may take place inside all the countries directly involved, and bloody violence between their patriotic co-nationals overseas may be seen in the streets of the cities all over the world.

In the emerging world of ethnic conflict and civilizational clash, Western belief in the universality of the Western culture suffers three problems: it is false; it is immoral; and it is dangerous. [Note 4: p.310]

Huntington warns us of belligerence and proposes three rules to prevent the clash, namely, abstention rule, mediation rule and commonalities rule. [Note 4: p316-20]. The right way to deal with the emerging civilizations, in short, is to respect the differences and search for the common values. “At least at a basic ‘thin’ morality level, some commonalities exist between Asia and the West.” Huntington calls for prudence and temperance because the future of human civilization and peace “depend upon understanding and cooperation among the political, spiritual, and intellectual leaders of the world’s major civilizations.” [Note 4: p.320-1]

It is splendid that, in spite of the hawkish talks around him, President Obama remains resolute for peace, and is determined to seek for and seize any opportunity tenaciously to strike a deal with his opponents. Stipulating through National Security Advisor Susan Rice in her Georgetown University speech, the Obama administration has obviously dropped the Cold War mentality and switched to “operationalize a new model of major power relations.”6 As the leading core state of the Western civilization, Obama’s highlight of the deal with Iran (mediation rule), silence on East Asia (abstention rule), and the emphasis on diplomacy (commonalities rule) in the SOTU 2014 indicate that the U.S. is heading in the right direction to prevent a clash with the Muslim and Chinese civilizations. His concurrence with Huntington’s approaches is also discernible in this U.S. embassy London statement.

U.S. leadership, the president said “is defined not just by our defense against threats, but by the enormous opportunities to do good and promote understanding around the globe — to forge greater cooperation, to expand new markets, to free people from fear and want.”7

This SOTU may become an unforgettable speech in the history of our “Civilization”.

4. Huntington, Samuel P. (1997), The Clash of Civilizations and the Remaking of World Order, New York: Touchstone.