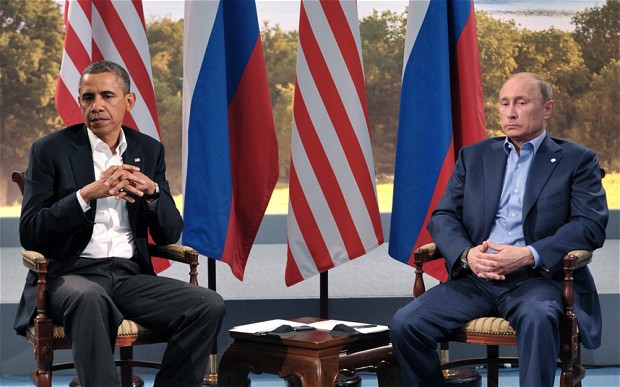 Vladimir Putin has a point: the United States seems to have discovered international law only recently.
By Adil E. Shamoo | April 4, 2014

In his speech in Brussels on March 26, President Barack Obama refuted Vladimir Putin’s assertions regarding the wrongs of the U.S. invasion of Iraq. Rhetoric aside, the Russian president has no moral standing for the invasion and annexation of Crimea. Nevertheless it is important to look at Obama’s own moral arguments in justifying an invasion that a majority of U.S. citizens regard as a major U.S. foreign policy disaster.

Putin called into question the legitimacy of the coalition behind the Iraq invasion by pointing out that President George W. Bush declared, “If you are not with us, you are against us.” Putin further mocked U.S. respect for international law, saying “it’s a good thing that they at least remember that there exists such a thing as international law – better late than never.” But mocking tone or not, we have a problem: both of Putin’s statements have legitimacy.

In order to justify the invasion of Iraq, Obama recently claimed that “America sought to work within the international system.” In fact, the United States was selective about which international law to invoke before the invasion. For example, there was no UN resolution authorizing the invasion of Iraq; the UN charter forbids such an invasion. Obama also stated, “We did not claim or annex Iraq’s territory.” But this was irrelevant: why would the United States commit such a blunder of annexing a hostile country in a hostile region with heightened anti-Americanism that was 7,000 miles away? Moreover, Iraq had nothing to do with 9/11 and constituted no threat to U.S. national security.

Obama continued by claiming that “we did not grab its [Iraq] resources for our own gain.” Obama must know that this assertion is false. At present there is ample evidence that securing oil resources was one of the primary reasons for the invasion of Iraq. Obama also knows that oil is a fungible commodity. And even though the United States has enough oil, Europe would go dark without supplies from the Middle East. The loss of Iraqi oil would have had devastating consequences for the economies of both Europe and the United States. Furthermore, prior to 9/11, the Bush administration under Vice President Dick Cheney’s leadership was seriously discussing the role of Middle Eastern oil for U.S. economic security.

The most disturbing aspects of Obama’s statements were the ones he didn’t acknowledge. He did not mention the devastation of Iraq from the invasion. The president must know that the unjustified Russian invasion and annexation of Crimea caused the death of only one Ukrainian soldier. In the first few weeks of the war, Iraq endured 380 Tomahawk cruise missiles strikes and 21,000 bombing sorties. Estimates are that Iraq has been set back decades in terms of public health, education, economy, and infrastructure. The number of Iraqi deaths is at a minimum of 200,000 and as high as 600,000.

Why did Obama oppose the invasion of Iraq before and after the invasion — an opposition that helped him win the presidency — if no wrongs were committed toward the Iraqis? Was his opposition to the war just a politically convenient way to win the support of millions of anti-war voters?

Toward the end of his speech in Brussels, Obama correctly said that “neither the United States nor Europe are perfect in adherence to our ideals. Nor do we claim to be the sole arbiter of what is right or wrong in the world.” Only with this statement did the president bring the needle of his moral compass back to its rightful place.

Adil E. Shamoo is an associate fellow of the Institute for Policy Studies, a senior analyst for Foreign Policy in Focus, and the author of: Equal Worth – When Humanity Will Have Peace. His email is ashamoo@som.umaryland.edu