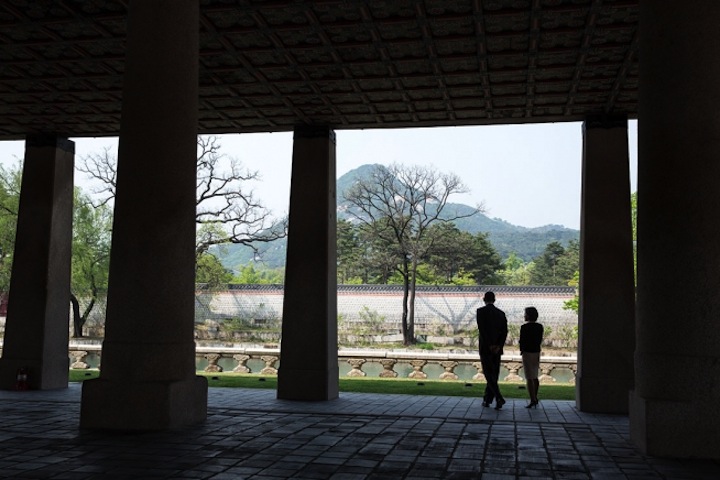 Obama’s four-country trip did the minimum required to maintain the narrative of a reorientation of U.S. foreign policy to Asia. But distracted by other foreign policy challenges and soon heading into the mid-term election cycle, the president may not be able to return his attentions to the Far East any time soon. (Photo: White House)

If Obama thought his short pass through Pacific would boost the much-vaunted U.S. “pivot” to Asia, he soon discovered that the world is not cooperating with his best-laid plans.
By John Feffer | May 2, 2014

President Barack Obama’s recent tour of Asia was an opportunity to reenergize his foreign policy after a series of setbacks in the global arena.

The four countries on the weeklong tour—Japan, South Korea, Malaysia, and the Philippines—have all been eager to upgrade their relationships with the United States in light of their concerns over Chinese maritime ambitions and an uncertain global economy.

But if the president thought that his short pass through Pacific would provide a lift to the much-vaunted U.S. “pivot” to Asia, he soon discovered that the world is not cooperating with his best-laid plans.

Ever since the Obama administration announced its “strategic rebalance” of U.S. foreign policy several years ago, the effort has encountered both domestic and foreign challenges.

At home, budget constraints have prevented the release of sufficient resources to finance a significant Pacific reorientation. Indeed, the threat of a government shutdown over the federal budget forced the president to postpone an earlier version of his Asia trip last October.

At the geopolitical level, meanwhile, the pivot was intended to reduce the liabilities of U.S. involvement in the Middle East. But that region has refused to allow the Pentagon and State Department to shift their attention.

The war in Syria, the collapse of negotiations between Israel and Palestine, the reversal of political fortunes in Egypt, and the ongoing talks with Iran have all continued to demand considerable U.S. focus.

An even greater distraction for the president at the moment is the crisis in Ukraine. Russia has already annexed one part of the country, the peninsula of Crimea. International sanctions have so far failed to discourage Moscow from fanning the flames of conflict in eastern Ukraine.

As Obama prepared to head toward Asia, Polish Defense Minister Tomasz Siemoniak urged the United States to “re-pivot to Europe” in order to bolster its NATO alliances.

Reassuring concerned allies over the potential military actions of a great power was also the expressed purpose of Obama’s trip to Asia. The president provided a good deal of rhetorical and symbolic assurances during his Pacific tour. But the pull of other pressing concerns has turned the “strategic rebalance” into a half-pivot at best.

Obama did reiterate that Washington would support Tokyo in any conflict over the Senkaku/Diaoyu islands. But he was also careful not to endorse Japanese sovereignty over the islands that China also claims.

Moreover, the Obama administration has quietly expressed dismay at Japanese Prime Minister Shinzo Abe’s more provocative actions, such as his visit to Yasukuni shrine and his controversial interpretations of World War II history, which have outraged neighboring countries.

Obama’s greater emphasis on Asia has failed to repair the relationship between the principal U.S. allies in the region, Japan and South Korea.

Despite some progress in the negotiations, the president was also unable to persuade the Japanese to remove trade barriers necessary for the completion of the Trans-Pacific Partnership, a proposed trade pact involving 12 countries.

To a certain degree the discussions in Japan were moot, since the president lacks the votes in Congress to achieve “trade promotion authority,” the fast-track authorization that nearly every trade pact has required for passage.

In South Korea, Obama’s visit was overshadowed by the ferry disaster that has so far left more than 200 dead. North Korea, meanwhile, tried to capitalize on Obama’s trip by ramping up its preparations for a fourth nuclear test.

Both Washington and Seoul have threatened repercussions should the North conduct a test, which would likely demonstrate the viability of its uranium enrichment program.

But North Korea already endures some of the toughest sanctions in the world. Its decision to flout these warnings is yet more evidence that the Obama administration’s policy of “strategic patience” has failed to address either North Korea’s nuclear program or any of the country’s underlying security concerns.

The trip to Malaysia reinforced the perception that the Obama administration has not put democracy and human rights front and center of its foreign policy. In the first trip of a U.S. president to Malaysia in nearly 50 years, Obama did mention democracy in his official speech.

But Malaysia’s potential participation in the TPP and its role in pushing back against the expansion of China’s maritime influence all make the country critical to U.S. role in the Pacific. Obama needs Malaysian Prime Minister Najib Razak’s support, not his irritation, so it was left to National Security Advisor Susan Rice to meet with leading oppositionist Anwar Ibrahim.

The one success the administration is touting from this swing through Asia is a new basing agreement with the Philippines, which gives the U.S. military greater flexibility in its access to the country. The Philippine government asked the United States to withdraw from its military bases in 1992.

But the new agreement does not add substantially to the previous two agreements signed by the two countries, the Mutual Defense Treaty and the Visiting Forces Agreement. Even this modest bump-up in cooperation, however, generated sizable demonstrations in Manila over the rotation of U.S. troops in and out of the country.

The enormous panda in the room, of course, is China. Obama and his entourage took pains to emphasize that all of these negotiations and treaties and military upgrades are for the general stability of the region and are not targeted at any particular country.

The Chinese, however, view the Pacific pivot as a form of containment. Behind the scenes, meanwhile, the Pentagon was drafting a set of contingency plans to deal with any possible military moves by China.

“As outlined by Obama and his Chinese counterpart Xi Jinping last June, the Pacific Ocean is large enough for the development of the two countries, and each side should respect the core interests of the other,” China’s Xinhua news agency observed before issuing a not-so-veiled warning.

“Meanwhile, it’s advisable for the United States not to underestimate China’s determination to defend its territories.”

Obama’s four-country trip did the minimum required to maintain the narrative of a reorientation of U.S. foreign policy to Asia. But distracted by other foreign policy challenges and soon heading into the mid-term election cycle, the president may not be able to return his attentions to the Far East any time soon.