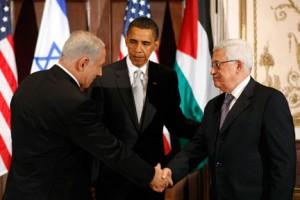 Barack Obama's Mideast speech shows that the United States has not yet adapted to the regional realities brought about by the Arab Spring.
By Stephen Zunes | May 20, 2011

Although President Barack Obama’s May 19 address on U.S. Middle East policy had a number of positive elements, overall it was a major disappointment. His speech served as yet another reminder that his administration’s approach to the region differs in several important ways from that of his immediate predecessor, but he failed to consistently assert principled U.S. support for human rights, democracy, or international law.

Obama was most eloquent in noting how popular nonviolent struggles were the driving agent of change in the region, and how this had in many ways made al-Qaeda decreasingly relevant even before the killing of Osama bin Laden earlier this month. Correctly recognizing that, through the use of nonviolent action, “the people of the region have achieved more change in six months than terrorists have accomplished in decades,” the president also observed, unlike the problematic efforts of “democracy promotion” in Iraq, “It is not America that put people into the streets of Tunis and Cairo – it was the people themselves who launched these movements, and must determine their outcome.”

Also to his credit, Obama did not just talk about free elections as the sole determinant of democracy, but the right of a free press, free assembly, and the right to information. Similarly, it is positive that he committed the United States to “build on our efforts to broaden our engagement beyond elites, so that we reach the people who will shape the future — particularly young people.”

In doing so, however, he will face the widespread opposition of these young people and other democratic forces to continued U.S. arms transfers and security assistance to corrupt and repressive regimes, the pursuit of a neo-liberal economic agenda that has exacerbated inequality in their countries, and ongoing U.S. support for the continued Israeli occupation and colonization of Palestinian land.

In his most forceful comments on the situation in Bahrain to date, Obama addressed concerns about the worsening repression in that island kingdom. However, he did not push for democratic change in Bahrain, a U.S. ally, nearly as much as he did regarding Syria, a longtime U.S. adversary. This unbalanced emphasis was particularly striking given that — as a percentage of the population — even more people have been killed and jailed in the former. For example, while calling for greater freedom for Bahrainis, Obama did not call on King Hamad to “lead that transition or get out of the way” as he did with Syrian President Assad. The United States has enormous leverage with Bahrain through its contributions to the government’s coffers in rent for military bases, as well as through arms sales and related security assistance that has been used to oppress pro-democracy demonstrators. But Obama has refused to impose sanctions on Bahrain as he did on Syria.

Another double standard apparent in the president’s speech was, while complaining that Iran has allegedly “tried to take advantage of the turmoil” in Bahrain, Obama refused to endorse international demands that U.S. allies Saudi Arabia and the United Arab Emirates withdraw the troops they sent into that island kingdom to brutally repress the overwhelmingly nonviolent freedom struggle.

Obama’s claim that, in Iraq, “we see the promise of a multi-ethnic, multi-sectarian democracy” is rather incredible given the ongoing sectarianism and political repression, including the killing and jailing of pro-democracy activists — including leading journalists and intellectuals — and the destruction of offices of civil society groups calling for greater freedom and transparency in the U.S.-backed regime.

It is gratifying to hear a president say that the United States “will oppose an attempt by any group to restrict the rights of others, and to hold power through coercion — not consent.” However, as long as the United States continues to provide allied regimes with billions of dollars worth of security assistance to make that coercion possible, there remain serious questions regarding how seriously Obama is willing to follow through on that commitment.

In addition, his claim that the United States “will not tolerate aggression across borders” continues to be somewhat selective given its ongoing support for the Moroccan occupation of Western Sahara and support for Israel’s continued occupation of the Palestinian territories. And although Obama opposed the invasion of Iraq, he has yet to withdraw U.S. forces from that country whose borders the United States crossed in what is recognized by most authorities of international law as an illegal act of aggression.

The good news is that Obama stressed that the Israeli occupation should end and an independent Palestinian state should be established, with its boundaries based on the internationally recognized pre-June 1967 borders. Though this has been the international consensus for years, right-wing Republicans and other allies of Israel’s rightist government have attacked Obama for his position.

However, Obama did not call for a complete withdrawal of Israeli troops and settlers from occupied Palestinian territory. The unspecified variations from the pre-1967 borders, Obama insisted, should be made through “mutually agreed-upon” land swaps. Unfortunately, despite Palestinian president Mahmoud Abbas agreeing to such reciprocal territorial swaps — even though it would leave the Palestinian state with a bare 22 percent of Palestine — Israeli Prime Minister Benyamin Netanyahu has refused to consider trading any land within Israel while simultaneously insisting on annexing large swathes of occupied Palestinian territory. How such “mutually agreed-upon” swaps will take place without the United States exerting enormous leverage — such as withholding some of the annual $3 billion in unconditional aid provided annually, which Obama has already ruled out — is hard to imagine.

The failure of Netanyahu to compromise has forced the Palestinian Authority to consider a unilateral declaration of independence in September within the areas of Palestine recognized by the United States as under foreign belligerent occupation — the 22 percent of Palestine consisting of the West Bank (including East Jerusalem) and the Gaza Strip. However, in his speech, Obama arrogantly dismissed such an exercise of the Palestinians’ moral and legal right to self-determination as “symbolic actions to isolate Israel at the United Nations.” His line that “a growing number of Palestinians live west of the Jordan River” came across as particularly bizarre since this is exactly where Palestinians had lived for centuries, not the neighboring Arab countries where millions of refugees now live.

Similarly, despite ongoing violations of a series of UN Security Council resolutions, a landmark advisory opinion of the International Court of Justice, and basic international humanitarian law by the government of Israel, Obama vowed “we will stand against attempts to single it out for criticism in international forums.”

It was positive that Obama specified that Palestinian borders must be with “Israel, Jordan and Egypt.” This appears to be an open challenge to Israeli efforts to control the occupied Jordan Valley (thereby having Israel completely surround a proposed Palestinian mini-state and closing off their access to its eastern neighbor) and — since the West Bank does not border Egypt — to prevent the Gaza Strip from joining the new Palestinian republic.

It seemed particularly odd that Obama refused to point out areas of Israeli intransigence and violations of international legal norms but made a point of chastising the Palestinians for their “efforts to delegitimize Israel” and insisting “Palestinians will never realize their independence by denying the right of Israel to exist.” Although such criticism of such actions are certainly reasonable in themselves, he seemed to ignore the fact that the Palestine Authority, their president and prime minister, the ruling Fatah party, and the Palestine Liberation Organization have repeatedly reiterated their recognition of Israel’s right to exist as an independent viable state in peace and security, which is more than the current Israeli government has ever done in regard to Palestine.

Also disturbing is Obama’s insistence that the borders of the new Palestinian state be agreed on prior to negotiations over the status of East Jerusalem, the nominal Palestinian capital and the base of leading Palestinian universities, businesses, and cultural and religious landmarks. Any idea that the Palestinians will accept an independent mini-state without East Jerusalem as its capital is frankly naïve.

Most disturbingly, Obama raised concern about whether the Israeli government should even negotiate with the recently announced national unity government formed between the two largest Palestinian parties, Fatah and Hamas, on the grounds of Hamas’ ongoing refusal to recognize Israel’s right to exist. Obama failed to note that the current Israeli government includes parties that refuse to recognize Palestine’s right to exist or raise concerns about whether the Palestinians should negotiate with an Israeli government that included such parties. This blatant double standard raises serious questions regarding Obama’s commitment to being an honest broker in resolving the conflict.

Obama concluded his speech by declaring that “we cannot hesitate to stand squarely on the side of those who are reaching for their rights, knowing that their success will bring about a world that is more peaceful, more stable, and more just.” Unfortunately, for decades, the United States has refused to do this. And, although the Obama administration has taken small steps in that direction relative to previous administrations, it still has a long way to go before fulfilling such a promise.

Stephen ZunesStephen Zunes, a Foreign Policy In Focus columnist, is a professor of politics and chair of Middle Eastern Studies at the University of San Francisco. He is the author, along with Jacob Mundy, of Western Sahara: War, Nationalism, and Conflict Irresolution (Syracuse University Press, 2010).