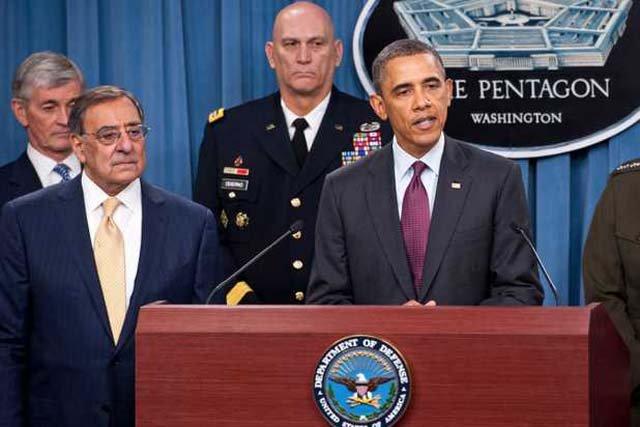 What happened to the idea of saving money?
By Miriam Pemberton | January 9, 2012

President Barack Obama ordered up yet another strategic review last year. This one explicitly aimed at bringing the nation’s military posture into line with something we can afford.

In response to that review, his administration forged a plan, unveiled during the first week of the year, which takes a few modest steps in the right direction. The job description for our self-appointed role as world policeman will be trimmed a bit. We won’t be patrolling everywhere all the time, but we’ll be doing something more like check-ins in places like Latin America and Africa. Some of those U.S. troops that have been guarding Europe since World War II will probably come home. The Army and Marine Corps will shrink modestly. There’s a verbal commitment, at least, to share more responsibilities with allies. And we’ll cut a few more Cold War weapon systems. That’s probably a safe move, now two decades since the Cold War ended. 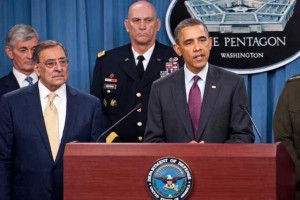 But we’re not stepping down from being the planet’s top cop. We’re holding onto the idea that we need to maintain a global presence and the ability to “confront and defeat aggression anywhere in the world.” And we’ll be projecting more power in China’s direction.

The glaring question is, in this portrait of a smaller, leaner military, what happened to the idea of saving money? The speech Obama gave when he presented the plan was contradictory on this point. He first referred to necessary reductions in military spending, and then promised that the Pentagon’s budget “will still grow, because we have global responsibilities that demand our leadership.”

How can he have it both ways? A look at the approximately $523-billion military budget proposal that experts expect him to release after the upcoming State of the Union address provides the answer. That proposed military budget, which excludes the hundreds of billions of dollars Washington spends on nuclear weapons, the wars we’re actually fighting, and subsidies for foreign arms sales, would be bigger than last year’s. It would be smaller than what the administration had said last year it had in mind for 2013. So Obama has revised his plans to boost military spending. And adjusted for inflation, it’s an actual reduction of about four percent.

This confusing presentation is an attempt to placate multiple constituencies at once. To Republicans seeking every opportunity to say Obama is weakening U.S. military forces, and to Democrats still nervous about that charge, he points out that this military budget will exceed the budgets of the next 10 largest militaries put together. To fiscal conservatives, he offers a budget that, in real terms, takes a tiny step in the direction of the $487 billion in military cuts the 2010 debt deal demanded.

But the predictable cries from the Heritage Foundation’s James Jay Carafano and other conservatives that Obama is “gutting” U.S. military strength are ridiculous. As the president himself points out, his next Pentagon budget will be larger than it was during most of President George W. Bush’s tenure.

Defense Secretary Leon Panetta referred to this new strategy as a “historic shift…after a decade of war and large increases in defense spending.” A shift worthy of the term “historic,” however, would lay out a path to rolling back the past decade’s sweeping military expansion.

But the Obama administration has no plans to do that. It’s time that we replaced our country’s global military overreach with a posture more deserving of the name “defense.”