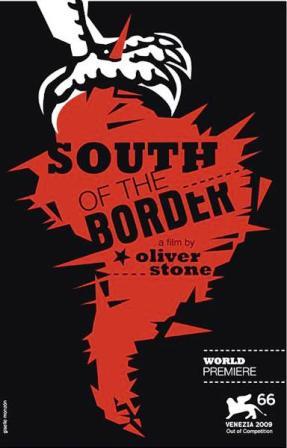 Oliver Stone's 'South of the Border' is a rapid march through the new world of Latin American politics.
By Shaun Randol | August 23, 2010 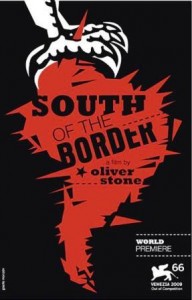 In many ways, Oliver Stone’s latest documentary film South of the Border is a mirror image of the 2004 film adaptation of The Motorcycle Diaries. In this latter film, based on the journals of a young Ernesto “Che” Guevara, two young idealists strike out across the South American continent on a motorcycle in search of adventure, but instead find passion, resilience, and a Latin American identity that transcended all political borders.

Fast forward to the 21st century. Substitute Oliver Stone for the young Che, Tariq Ali for Che’s sidekick, Alberto Granado, a jet for the motorcycle, and Hugo Chávez for the ghost of Simon Bolivar and, more or less, you’ve got South of the Border.

Stone’s film doesn’t quite capture the full reality of Latin America’s turn leftward. But like Che on his motorcycle, Stone manages to discover a new pan-Latin American identity.

Latin America is not new territory for the venerable director. Stone’s 1986 drama Salvador tackles the 1979 junta government takeover in El Salvador and the assassination of Archbishop Oscar Romero. In Comandante (2003), Stone interviews Cuban leader Fidel Castro over a period of three days on a wide array of topics.

In South of the Border, however, Stone takes it up a notch — or eight — by interviewing eight political leaders from across South America and Cuba. His reasons for the trip are twofold. First, says Stone, the mainstream media in the United States more often vilifies South American leaders, especially Venezuelan president Hugo Chávez, than praises or even fairly evaluates them. Thus, he seeks to give the politicians a platform from which they can hold forth on a variety of topics without being edited for sound bites or shouted down by vociferous talking heads. The second reason is to try and make sense of what appears to be a strong, pan-Latin American movement of cooperation and unification — a revolutionary apparition equally shaped from the top-down as it is from the bottom-up.

Like the protagonists in The Motorcycle Diaries, Stone uncovers much more on his trip across the continent. A three-part consensus emerges from Stone’s various interviews with the political heavyweights. First, International Monetary Fund manipulation of domestic Latin American economic affairs is nothing short of devastating, if not downright immoral. Second, U.S. interference in their political affairs is not only unneeded, it is unwelcome. And third, the emergent Latin American revolution owes its momentum to the passionate leader of Venezuela, Hugo Chávez.

Skipping over U.S. ally Colombia, Stone focuses on the core leaders in the rising Latin American revolution such as Chávez, Evo Morales (Bolivia), Lula da Silva (Brazil), Cristina Kirchner and her husband and former President NÄ—stor Kirchner(Argentina), Fernando Lugo (Paraguay), Rafael Correa (Ecuador), and Raúl Castro (Cuba). Tariq Ali jumps in now and again to add some historical context and intellectual heft to back up political points made by the interviewees.

South of the Border starts off strong — real strong. Stone begins with the economic crises crippling Venezuela in 1988-89, setting the stage for Chávez’s failed military coup in 1992. More economic turmoil and a few years later, Chávez gains control of the country in 1998, this time by popular vote. The film recounts President Chávez’s successes (but none of the failures). After re-election in 2002, comes the attempted overthrow of Chávez by — many believe — an American-supported coup. For Americans who watched the drama unfold from thousands of miles away by way of anti-Chávez media reports (from FOX to CNN), the segment is illuminating. Chávez recalls the frightful moment when he is held at gunpoint in his own office before being ushered to a port city. Stone dutifully replays the Venezuelan media’s misleading reports of angry Chávez supporters rioting in the streets and opening fire on the police and then offers a convincing alternative story. Indeed, what was shown to be a popular uprising that ousted Chávez turns out to be little more than a well-controlled “media coup.” Anti-Chávez media companies who wished to usher in a more business-friendly president spread false reports and disinformation against Chávez across the airwaves. But the coup failed, Chávez was back in office within two days, and he hasn’t left since.

Chávez comes off looking like “one of the people” and bookish at the same time. El Presidente holds forth on a myriad of topics, like economic re-distribution of wealth, oil politics, U.S. and IMF interference in Latin American affairs, and the increasing momentum of pan-Latin American collaboration. Whether you are a fan of Chávez or not, it is refreshing to listen to the man speak, uninterrupted, with an American. Stone knows he is no political expert, so he lets his interviewees speak for lengthy spells. Stone provides the platform, and they take it. Granted the interrogations are friendly. Stone doesn’t lob any politically difficult questions at the leaders, there’s no criticism of failed policies, and the film doesn’t offer any unexpected revelations. But this is Stone’s modus operandi; his goal is to re-introduce this panoply of Latin American leaders to a general American audience.

A visit with Bolivian president Evo Morales is next on the agenda. In between chewing coca leaves and kicking a soccer ball around, Morales muses on the problem he and his troubled country face: IMF involvement in the country’s economic affairs and the destructive practice of privatizing state enterprises (like water provision). He fears assassination and complains that the United States is using its “War on Drugs” as an excuse to get involved in Bolivian politics. Here Morales echoes themes brought up by all of the film’s subjects: IMF interference and U.S. meddling in domestic affairs are hindrances to real progress. A double whammy from the presidential duo of former President NÄ—stor Kirchner and his wife, current President Cristina Kirchner, come next. They too echo the laments of Morales and go on to praise Chávez for lighting the fire of U.S. neoliberal resistance on the South American continent.

Fast Forward through the Continent

Soon after Stone leaves Argentina the film moves at a quicker clip, much to its detriment. South of the Border suddenly takes on the feel of a political road trip; interviews with Correa, Lugo, Lula, and Castro begin to feel like brief rest stops. None is given the attention that Chávez commands or that Morales and the Kirchners receive. The interview with Lugo, for one, is over before you realize it started, and Correa is given short shrift as well.

The segment on Venezuela and Chávez that opened the film was gripping and could easily have sustained the entire film. Eight documentaries on each of the political leaders — their rise, successes, failures, American (mis)perceptions of, and so on — would be equally compelling. Certainly Stone had enough interview time with each of the leaders to cobble together, along with even more insights from Tariq Ali and material from local television and eyewitness reports, these eight distinct documentaries.

To tackle such an endeavor, however, is to have a certain audience in mind, one that is politically active, willing and able to engage in an hour-long treatment of a single Latin American leader (say, once per week on HBO or PBS), and then able to adjust any pre-formed opinions of these Latin American political stars. If Stone’s target is the average American, then the 78-minute-long South of the Border serves to whet the appetite but falls short of its stated goal of giving these leaders their due.

Despite these shortcomings, the film manages to illustrate its major themes, particularly the new reality of a pan-Latin American political movement. All the leaders seem to have one eye on getting their own houses in order, and another eye on increased cross-border cooperation. This latter effort not only appeals to Lugo, Correa, and Kirchner et al because it increases their own states’ political, economic, and social wealth, but because it just feels… natural. The people of Latin America seem to be drawn together like magnets; the natural attraction among the leaders is palpable.

South of the Border has been shown in Latin American to audiences in the tens of thousands, for free, but that’s like showing a Michael Moore film in Central Park in New York City. The audience already knows of and approves of the message they are about to see. At the screening I attended in New York City, where Stone and Ali took questions from the audience, the crowd was also of the converted.

If Stone really wants to get his message across with this short documentary, he might consider encouraging the pirating and distribution of DVDs of this film in places where FOX News dominates the news cycle. He should hold free screenings the way he has in Latin America, except in semi-urban and rural areas of Texas, California, Florida, Virginia, South Carolina, and anywhere else that is not a liberal hotbed. Then let’s see if U.S. perceptions of these so-called freedom-hating communists changes.

Shaun RandolShaun Randol is the Founder and Editor in Chief of The Mantle. He is also an Associate Fellow at the World Policy Institute in New York City, and a member of the National Book Critics Circle.