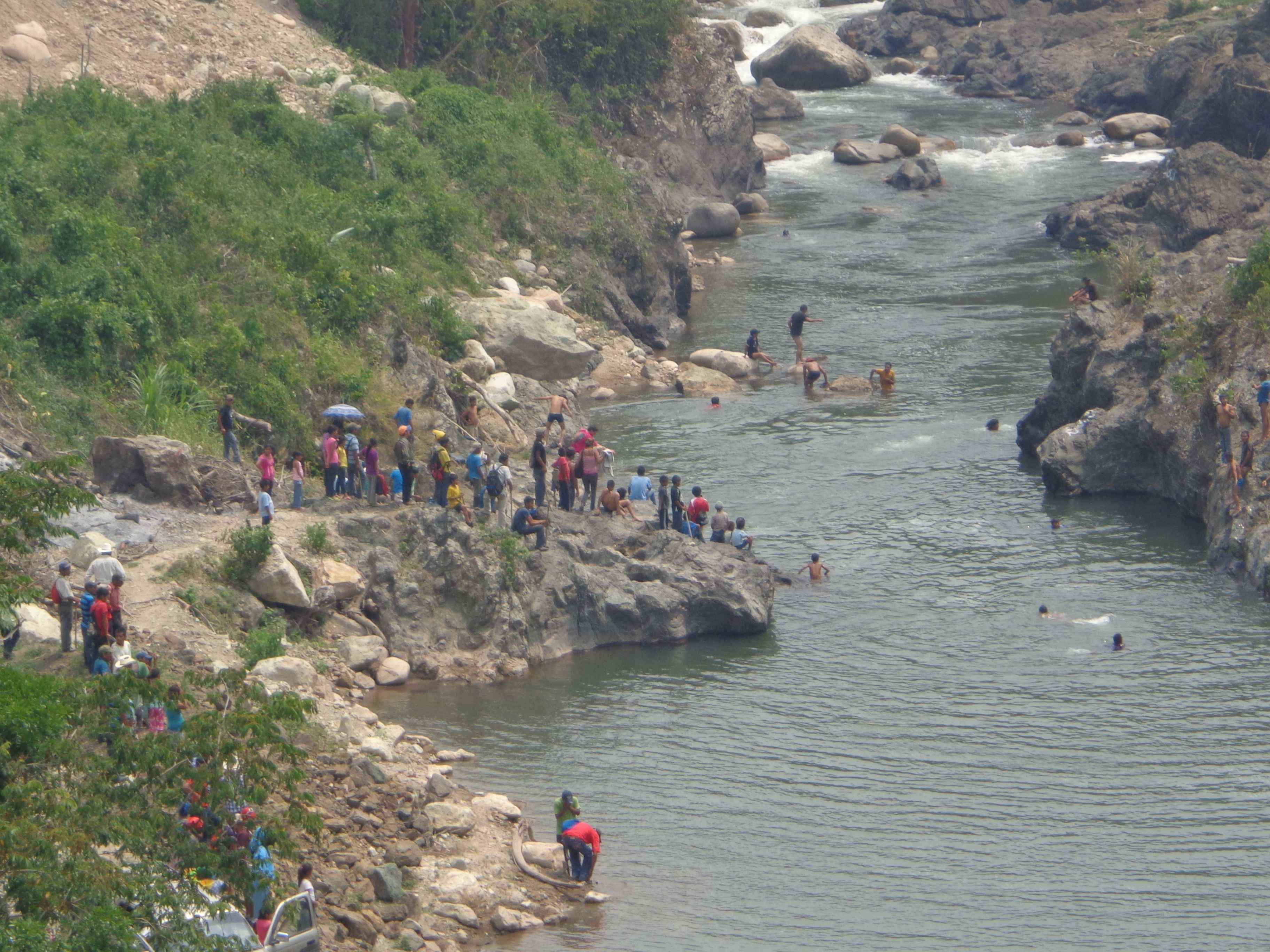 April 1 marks one year since Honduras' Rio Blanco community began a human barricade that has so far stopped a corporation from constructing a dam that would privatize and destroy the sacred Gualcarque River.

One Year of Resistance in Rio Blanco

Despite U.S.-backed violence against them, indigenous communities are fighting back as multinational corporations encroach on their lands.
By Beverly Bell | April 1, 2014

This article is a joint publication of Foreign Policy In Focus, NACLA, and TheNation.com.

“Screw the company trying to take our river, and the government. If I die, I’m going to die defending life.” So said María Santos Dominguez, a member of the Indigenous Council of the Lenca community of Rio Blanco, Honduras.

April 1 marks one year since the Rio Blanco community began a human barricade that has so far stopped a corporation from constructing a dam that would privatize and destroy the sacred Gualcarque River. Adults and children have successfully blocked the road to the river with their bodies, a stick-and-wire fence, and a trench. Only one of many communities fighting dams across Honduras, the families of Rio Blanco stand out for their tenacity and for the violence unleashed upon them.

The Honduran-owned, internationally backed DESA Corporation has teamed up with U.S.-funded Honduran soldiers and police, private guards, and paid assassins to try to break the opposition. Throughout the past year, they have killed, shot, maimed, kidnapped, and threatened the residents of Rio Blanco. The head of DESA, David Castillo, is a West Point graduate. He also served as former assistant to the director of military intelligence and maintains close ties to the Honduran Armed Forces.

María Santos Dominguez’s prediction that she would die defending life almost came true. On March 5, seven people attacked her as she was on her way home from cooking food at the local school. They assaulted her with machetes, rocks, and sticks. When her husband, Roque Dominguez, heard that she was surrounded, he and their 12-year-old son Paulo ran to the scene. The men brutalized them as well. They brought a machete down on the child’s head, deeply slashing his face, cutting his ear in half, and fracturing his skull. Dominguez’s hand was severely injured, and he also suffered cuts to the face. (Friends of the Earth has organized a petition to urge the Honduran government to investigate, which you can sign here). 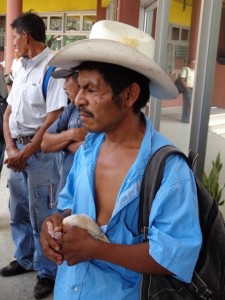 Roque Dominguez, who has twice been attacked by men wielding machetes during the blockade. (Photo: Beverly Bell)

This was the second machete attack Roque Dominguez suffered since the community began its blockade. The first, on June 29, by several members of a powerful family allied with the dam company, left his eye, face, and hand mutilated. Days later, a soldier murdered María’s brother, Tomás Garcia, and shot his 17-year-old son, Allan, in the chest and back. The two bullets barely missed Allan’s heart.

Washington has admonished Honduran land rights defenders, even singling out the people of Rio Blanco. The U.S. ambassador to Honduras, in her remarks on International Human Rights Day on December 10, 2013, accused the Lenca community of trying to block development, and cited them as an example of people incorrectly taking justice into their own hands. And on June 28, 2013, according to the newspaper La Prensa, the ambassador called on the Honduran government to prosecute those who encourage small farmers to occupy lands. Weeks later, the Honduran court leveled exactly that charge, and others, against three leaders of the Council of Popular and Indigenous Organizations of Honduras (COPINH), of which the Rio Blanco community is a member.

The U.S. government has been a strong force behind the exploitation of natural riches on indigenous and small-farmer lands. In 2009, the U.S. contributed to a coup against President Manuel Zelaya, which was motivated in part to quash his support for agrarian reform and greater rights for indigenous and land-based peoples. President Obama backed the unconstitutional administration that followed as it gave corporations free reign for resource extraction, including granting 41 illegal contracts for dams. Many of those contracts are moving forward in today’s pro-business environment, in violation of Honduran and international conventions requiring free, prior, and informed consent by the indigenous peoples on whose territories the projects would be located.

During the period between the coup against Zelaya and today, the U.S. government has given not only political support to the anti-indigenous, law-violating administrations, but also almost $40 million in military and police aid—aid used for repression of citizens and for the so-called drug war. The United States also maintains six military bases in the country.

U.S. support also helped Juan Orlando Hernandez impose himself as president following the November 24, 2013 elections, guaranteeing an agenda of promoting multinational looting of natural resources. Though the elections were marred by violence, intimidation, and blatant fraud by backers of the ruling party—including the buying of votes, the counting of ballots from dead people, manipulation of the count, and the selling of election worker credentials—the U.S. ambassador called them transparent. Hernandez’s business-at-any-cost position was clear from his time as president of the National Congress, when he passed a law that gave mining corporations priority access to water over the needs of the people living in the area, and championed a law creating “model cities,” which essentially turn land over to corporations to manage. As president, Hernandez is now pushing forward these “Special Economic Development Zones.”

Freshly out of the hospital, María insists on returning to her home in Rio Blanco and continuing to fight the dam. Many have warned her of the dangers, but she is, to quote one human rights worker who knows her well, “so unbudging.”

COPINH issued a communiqué on March 6 that read in part, “We demand that the authorities not leave this case to impunity… as they have so many aggressions against many Lenca members of COPINH in Río Blanco. We demand justice and an end to violence and threats against the individual and collective rights of the Lenca People of Río Blanco.”

Beverly Bell
Beverly Bell is an Associate Fellow at the Institute for Policy Studies and Coordinator of Other Worlds. She has worked with indigenous movements in Honduras for 15 years.