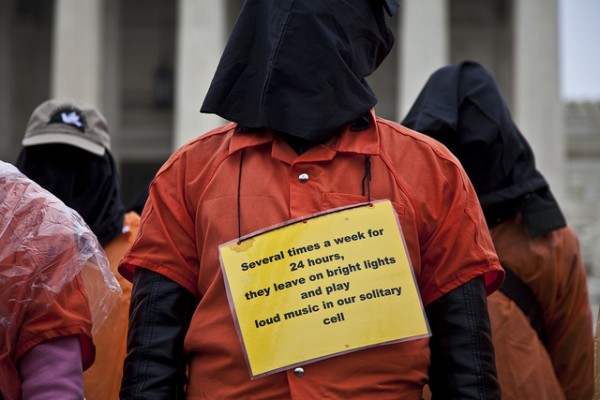 Only Stupid People Say Torture Works, and One of Them’s in the White House

It should come as no surprise to anyone that Donald Trump is pro-torture. He said on the campaign trail he’d approve waterboarding “in a heartbeat,” plus “a hell of a lot worse.”

He added: “Only a stupid person would say it doesn’t work.”

There are certainly a lot of stupid people then, because everyone from interrogators to researchers have repeatedly concluded that torture doesn’t work. People will say whatever you want them to say to make the pain stop, making torture not only inhumane but also bad for intelligence.

A 2009 Senate Armed Services Committee review concluded that torture “damaged our ability to collect accurate intelligence that could save lives, strengthened the hand of our enemies, and compromised our moral authority.” That’s why the Senate voted in 2015 to turn the presidential ban on torture into official law.

To his credit, Trump did water down his original support for torture, allowing Defense Secretary James Mattis — who opposes torture — to override him.

But if the Trump administration is now opposed to torture, why are they nominating the architects of America’s torture fiasco to key posts?

Take Steven Bradbury, nominated to be general counsel for the Transportation Department. Bradbury is infamous for writing the legal memos authorizing CIA torture at the Bush Justice Department.

Bradbury’s confirmation was placed on hold by Senator Tammy Duckworth, an Iraq veteran who lost her legs in the war. “The actions you helped justify put our troops in harm’s way, put our diplomats deployed overseas in harm’s way, and you compromised our nation’s very values,” she said angrily at his confirmation hearing.

Or what about Donald Trump’s new FBI director, Christopher Wray?

Wray was at the Justice Department when attorney John Yoo and others were drafting their torture memos. Wray knew about detainee abuse and did not, as head of the criminal division, bring charges against any of the Bush administration torturers — except for one low-level CIA contractor who beat a prisoner to death.

A third person connected to torture is Gina Haspel, who was appointed deputy director of the CIA. Haspel ran a “black site” prison in Thailand where suspects were waterboarded — and then helped destroy video of the interrogations.

The Senate Intelligence Committee meticulously documented the sordid U.S. record of torture under the Bush administration in a 6,770-page report. But the public hasn’t been able to read it — only the executive summary has been released.

Yet this isn’t just an exercise in history. In June, Human Rights Watch and the Associated Press published explosive reports revealing a secret network of prisons in southern Yemen run by U.S.-allied United Arab Emirates and Yemeni forces.

The reports reveal horrific practices in which prisoners, including children, have been arbitrarily detained, forcibly disappeared, sexually assaulted, and tortured. One torture method, known as the “grill,” had victims tied to a spit like a roast and spun in a circle of fire.

Reports indicate that the U.S. military knew about the torture, received transcripts of the interrogations conducted by Yemeni interrogators, and interrogated several detainees themselves. According to one Yemeni security officer, American forces were only yards away from a facility where torture took place.

Senators John McCain and Jack Reed immediately expressed outrage, calling on the Trump administration to investigate the allegations. But the reaction of the White House to these revolting reports is telling: radio silence.

Trump’s refusal to publicly condemn these secret prisons, together with the appointments of people who played a role in George W. Bush’s torture program, should set off alarm bells.

Only stupid people say torture works, and one of them is sitting in the White House.

Medea Benjamin, cofounder of CODEPINK for Peace, is the author of The Kingdom of the Unjust: Behind the US-Saudi Connection.