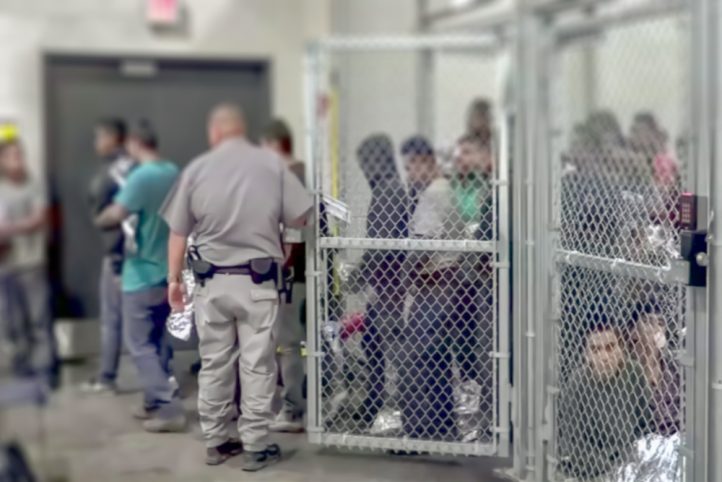 From treating the crisis like a “hoax” to botching the rollout of tests, the federal government has already made a series of decisions that are worsening the coronavirus pandemic.

Trump’s announcement that the United States will bar asylum seekers at the border is yet another that will guarantee more death and suffering as the infection unfolds. That is why ending the detention of immigrants and allowing people stuck at the border entry is not only the humane thing to do: It is also what will best serve public health.

This may come as a surprise. Isn’t the best approach right now to limit movement? Shouldn’t people stay where they are? Why then would the United States open its borders to large numbers of people seeking entry?

To answer these questions, we have to look at the situation that the policies have already caused.

We all remember the past two years’ worth of horrific photos and videos of children and adults packed into animal cages in detention centers, suffering obvious neglect. Or people detained under bridges in Texas when their numbers exceeded the capacity of the Border Patrol to hold them indoors.

There is an unfolding conversation about the fact that prisons, jails and other carceral facilities pose a special threat to public health in light of the coronavirus outbreak. The basic recommendations from the CDC, such as regularly washing hands and keeping a distance between people, are impossible to follow in the dirty, overcrowded conditions behind bars.

As Homer Venter, a physician formerly employed at Rikers Island, has said, “Jails and prisons may actually drive this epidemic curve up. These are places that can serve as reservoirs or accelerators of an outbreak.”

This is true for immigrant detention too. And yet, the drive to detain more—particularly the crackdown that Trump promised targeting migrants in sanctuary cities—continues. ICE agents are carrying out raids in California with respiratory masks.

At the same time as the attack on immigrants has produced dangerous and inhumane conditions in U.S. detention facilities, it has also created a parallel crisis and public health timebomb at the border.

A combination of policies, from the “Migrant Protection Protocols” (also known as the “Remain in Mexico” program) that forces asylum seekers awaiting legal proceedings to wait south of the border, to so-called “metering”—allowing a tiny number of people to apply for asylum at the border each day—has produced a bottleneck for people seeking entry to the country. Predictably, makeshift camps of thousands have emerged in cities on the Mexican side of the border, such as Tijuana, Matamoros and Juarez as people patiently await entry.

One does not need to be an epidemiologist to understand why forcing large numbers of families into squalid camps, exposed to the elements, with no running water and minimal access to medical attention makes them vulnerable to countless health threats—especially a highly contagious infection spread by sneezing and coughing.

The well-being of these people should be enough to pursue a humane approach rather than abandoning them. But leaving them susceptible to certain infection, without the possibility of treatment, not only threatens those stuck in the camps. It threatens the health of the public at large.

If there is one biology lesson that the whole world is learning, it is that infectious disease travels. By keeping asylum seekers out of the country and effectively forcing them into informal encampments to survive, the U.S. government has put them in tremendous danger. It has also stoked the fuel for wildfires of infection that will easily spread and be difficult to put out. The impact will inevitably go beyond the camps and affect others in the U.S. and Mexico.

What can be done?

This is actually a problem all over the world. Many governments have pursued policies similar to Trump’s, and aid agencies are bracing for what happens when coronavirus hits the world’s refugee camps.

The promise of the Trump administration—and of other governments around the world that are closing their borders—that this will defend the nation from infection is a false one.

It is important to say, given incredible racism and xenophobia infusing the right wing’s language about the crisis (e.g. Trump calling coronavirus “the Chinese Virus”), that migrants at the border, or anywhere else, should not be seen as vectors for disease. They are human beings who have been put in a situation where infection was unavoidable. But just as government policies created those circumstances, new ones can end them.

And it is urgent that they be ended. What can be done?

First, as RAICES, the Detention Watch Network and hundreds of other organizations have called for, all immigration raids should immediately be suspended, and those detained should be released. Rather than add more people to U.S. detention facilities, they should be emptied.

And regarding its policies at the border, the United States needs to completely reverse course. As the Washington Office on Latin America and more than 150 other organizations recently demanded, the “Migrant Protection Protocols” should be ended. The United States should allow asylum seekers to enter the U.S. quickly and efficiently, and pursue due process in safety on this side of the border, which is their right under both international and U.S. law.

How could the U.S. government handle large numbers of people who no doubt have compromised health and very likely have been exposed to coronavirus? It can start by providing to them what everyone who has been potentially exposed to the virus deserves: testing, and treatment for those who test positive.

The government should also take responsibility for the safety of asylum seekers and refugees. Many of those trapped at the border have family and friends they are hoping to reunite with in cities and towns across the United States. It should be up to public health experts and medical professionals to decide if it makes sense for people to travel to these destinations. If so, the government should transport them safely and efficiently.

If the proposal that the government ferry immigrants seems strange or unreasonable, consider the fact that it already invests resources in transporting them—out of the country. The U.S. government uses commercial aircraft all the time to deport immigrants. Could it not use them, in an emergency, to transport people to their U.S. destinations instead? With a steep decline in air travel, there are plenty of grounded planes available.

Perhaps it makes more sense to direct people to particular locations, such as the border region or elsewhere, for now as the crisis unfolds—another question for public health and immigration policy experts. And no doubt there are people at the border who do not yet have homes in the United States to come to.

We have the capacity to house these people, as we do homeless people on this side of the border. As research from the Lincoln Institute of Land Policy has shown, millions of vacant housing units exist across the country. Organizations like People’s Action have been arguing that housing a right for all since before the outbreak.

Referring to the wealth that the United States invests year after year in militarism, race and housing scholar Keeanga-Yamatta Taylor argues that “we can divert billions of dollars toward the construction of low-rise apartment housing throughout cities.” This is true for everybody in this country, regardless of where they happened to be born.

In other words, the pandemic rippling through the world should force us to transform our society in ways that we should have before this crisis.

There is nothing to celebrate about the doom unfolding, and this will be a time with much darkness and pain. But it is also one that extends us an opportunity to reimagine what kind of society we want. It can be one that takes care of the most vulnerable as part of building a better world for all.

At the moment, we are headed in the opposite direction—a further entrenchment of the violence and inequality that made so many so vulnerable to COVID 19 and other dangers. Trump’s latest attacks on asylum seekers deepen the injustice and endanger us all. We have a choice. Release detainees, welcome asylum seekers, and give them the care that they need.

Solidarity, not fear, will allow us all to survive this outbreak.

This article was produced in partnership with InTheseTimes.com.

Khury Petersen-Smith is the Michael Ratner Fellow at the Institute for Policy Studies.