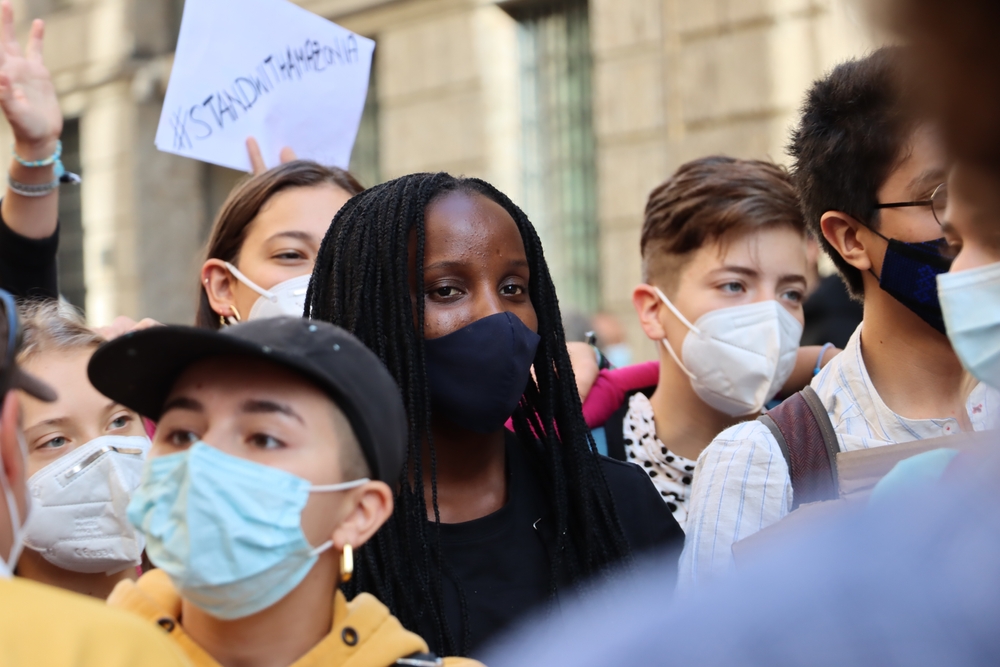 ‘Open Your Hearts’: The Movements Taking Climate Action Where Leaders and Media Won’t

The world's most existential crisis has all but fallen off Washington's agenda. But campaigners are finding success in more immediate targets.
By Donna Katzin, William Minter | June 7, 2022

Media, politicians, and policymakers tend to focus on the most visible issues.

The attention the war in Ukraine has received in the first half of 2022, for example, is unrivaled in the United States at least since the shock of 9/11 in 2001. The war has been highly visible because of the capacity to obtain compelling photographs and videos, which can be shared quickly through social media — and also, perhaps, because the featured protagonists, victims, and voices in this European war are white, in contrast to past and present wars in Africa, the Middle East, Asia, and Latin America.

The gut-wrenching suffering in Ukraine deserves coverage, context, and resolution. But meanwhile, other global issues — pandemics, rising economic inequality, the climate crisis, and more — have faded into the background.

The backsliding on climate action is a clear example of the damage done.

By this spring, fossil fuel companies were celebrating massive increases in profits, while Congress was approving $47 billion in new spending for Ukraine, the largest U.S. aid package to a single country in decades. Political will in Washington to stop production of fossil fuels and invest in renewable energy, already weak, had evaporated as time to avoid a climate apocalypse continued to run out.

Meanwhile, the rise in fuel and food prices caused by the war is being felt most intensely in developing regions such as Africa. This has come on top of preexisting shocks from the continent’s own wars (fueled by outside actors including the United States, France, Russia, and others), from illicit financial flows draining the continent of its wealth, and from the deadly toll of climate-caused disasters already taking lives and destroying livelihoods.

As of late May, both the Biden administration and Congress seem to be committed to “winning” the war in Europe instead of encouraging negotiated solutions. As the November election approaches, on the eve of the next climate summit scheduled for Egypt, funding global climate commitments to Africa and the world for recovery from climate damages and investment in a sustainable future can hardly compete with eagerness to fund a wider war.

The obstacles to action were already formidable.

Lobbyists from fossil fuel industries could count on strategically placed Senator Joe Manchin, the coal industry oligarch unapologetic about his own conflicts of interest. Highly publicized pledges for “net-zero” goals from giant corporations and other institutions, including fossil-fuel companies themselves, were most often filled with enough loopholes to make them virtually meaningless. Demands for rich countries to provide compensatory funding for climate damage to the most vulnerable countries won lip service but not funding at global conferences.

On April 4. 2022, the final Intergovernmental Panel on Climate Change Synthesis Report was released, concluding that   “In the scenarios we assessed, limiting warming to around 1.5°C (2.7°F) requires global greenhouse gas emissions to peak before 2025 at the latest, and be reduced by 43% by 2030. However, it gained relatively little media attention. Obstruction by the fossil fuel industry was a central theme of the report. But it was excluded at the last minute from the “Summary for Policymakers.”

Soon after, United Nations Secretary-General António Guterres slammed the fossil fuel industry for trying to use Russia’s war on Ukraine to boost polluters’ profits at the expense of the global climate and all life on Earth.

“Fossil fuel interests are now cynically using the war in Ukraine to try to lock in a high carbon future,” Guterres tweeted. “A shift to renewables is crucial to mending our broken global energy mix and offering hope to millions suffering climate impacts today.”

Meanwhile, solar energy companies have been paralyzed by a Commerce Department ban on imports of solar modules from Cambodia, Malaysia, Thailand, and Vietnam, to investigate whether the imports contained too high a percentage of components from China. The Commerce Department investigation is due to be completed in August, but in the meantime it is likely that as much as 64 percent of U.S. solar projects could be canceled because of fear of retroactive tariffs. In June, the administration announced a pause on new solar tariffs, but for existing projects the damage may already be done.

In May, the World Meteorological Organization predicted that “there is a 50:50 chance of the annual average global temperature temporarily reaching 1.5 °C above the pre-industrial level for at least one of the years” from 2022 to 2026. Yet few national governments, apart from the small island states that can easily envision their entire countries being sunk beneath the oceans, have adequate incentives to act with the urgency demanded by the scientific facts.

And a new exposé in The Guardian revealed that “the dozen biggest oil companies are on track to spend $103 million a day for the rest of the decade exploiting new fields of oil and gas that cannot be burned if global heating is to be limited to well under 2C.”

Meanwhile, at a climate conference in Florida, House of Representative Speaker Nancy Pelosi shrugged her shoulders when asked about the prospects for passing climate legislation this year.

Where Climate Campaigners Are on the Offense

Fortunately, many climate activists are recognizing that, as in a host of other crises, it is both necessary and possible to focus on more immediate targets — from state and local governments to fossil-fuel giants that can be confronted with disinvestment as well as physical blockages of pipelines and other climate-destroying projects. Such actions, if multiplied around the world, have the potential for their own cumulative impact as well as for catalyzing action by national governments.

Examples of such initiatives abound even though they may not be featured in global headlines.

In Oregon, a lawsuit filed by 21 young plaintiffs in 2015 to establish a federal, constitutional right to a livable planet is still making its way through appeal courts, despite opposition first by the Trump administration and then by the Biden administration. If the case is successful, any federal policies that enable more fossil fuel development could be challenged as unconstitutional.

At the state policy level, California has long taken the lead on climate, although the fossil-fuel industry has won legislative battles delaying the most ambitious plans. Still, in April the state mandated that 35 percent of new passenger vehicles sold there by 2026 be powered by batteries or hydrogen, up from the current level of 12.4 percent. Since California state standards set the context for the U.S. auto industry in general, the effect will be multiplied nationwide.

In Latin America, Chile is well on its way to following Ecuador in establishing “rights of nature” in its proposed new constitution to be voted on in September.

And in South Africa, a Climate Change Bill introduced in February has opened a door to begin to reduce the country’s dependence on coal. While it still has loopholes, it is likely to be strengthened in the wake of the catastrophic floods that swept the country’s KwaZulu-Natal province in April, officially claiming more than 435 lives and discrediting the energy minister’s defense of continued reliance on coal.

“People Power Is What’s Going to Make the Real and Huge Difference.”

On a parallel track, key corporate campaigns are gaining momentum. One such campaign demanded that six of the largest U.S. banks, which have pumped more than $1 trillion into the industry from 2016-2020, stop financing the development of fossil fuels. Despite comments from industry spokespeople minimizing the votes in favor, the results have already dwarfed early anti-apartheid proxy votes that grew into broad campaigns culminating in financial sanctions against the apartheid regime.

Elsewhere, a campaign by South African traditional communities and environmentalists to halt fossil fuel exploration off the Eastern Cape’s Wild Coast won an indictment against Shell Oil. Moreover, a host of practical and creative energy-saving solutions are coming from architects, visual artists, and textile designers.

In Uganda, Fridays for the Future, led by 22-year-old Hilda Nakabuye, has mobilized over 25,000 activists. Although campaigners in East Africa, such as her fellow Ugandan Vanessa Nakate, have gained the greatest international visibility, her counterparts are mobilizing in both cities and villages in almost every country on the continent. They are implementing the call eloquently presented by Kenyan activist Elizabeth Wahuti to COP26 in Glasgow to “please open your hearts.”

The delegates there, including representatives of governments and fossil-fuel companies themselves, clapped politely. But the future, noted Wahuti, the founder of a local tree-planting organization, would depend on those who themselves felt the impact of climate-caused drought on their communities.

“People power is what is going to make the real and huge difference in the world today,” she told the delegates. “It must if there is to be a tomorrow.”

Donna Katzin is the founding executive director of Shared Interest. William Minter is the editor of AfricaFocus Bulletin.