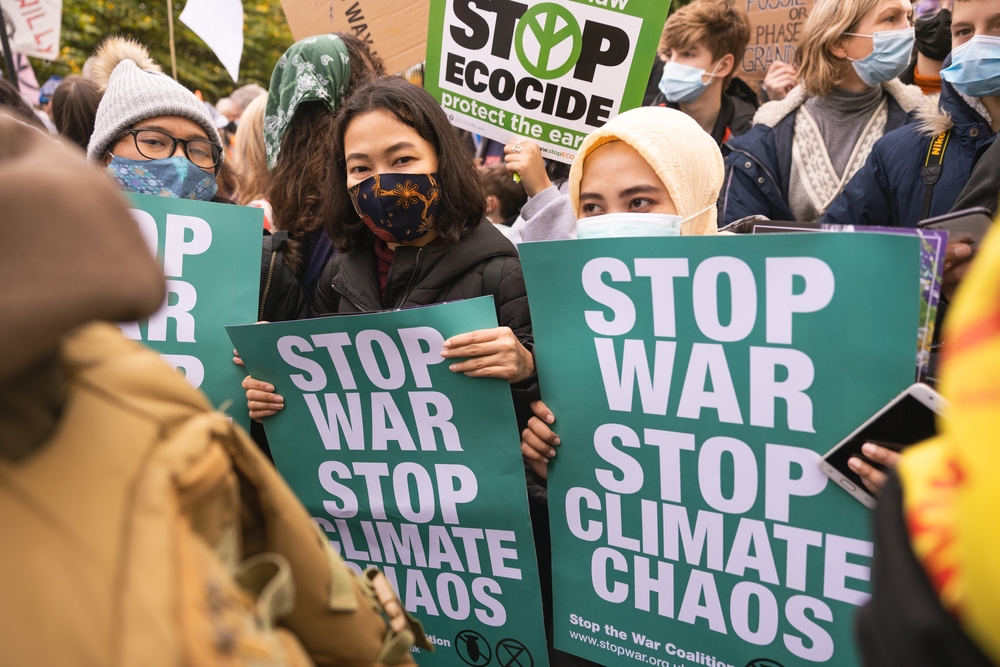 The U.S. military is a huge emitter of greenhouse gasses. Demilitarizing the United States is part of tackling climate change.
By Beka Yang, Ramon Mejia | December 13, 2022

As people all over the world continue to suffer record-breaking climate devastation, one of the central themes of the 27th UNFCCC Conference of the Parties was loss and damage. Even so, the COP process remains biased towards the interests of the fossil fuel industry and Global North countries—those most responsible for climate damage. At COP27, more than 600 fossil fuel lobbyists attended, more than a 25 percent increase since last year’s conference.

As the single largest consumer of fossil fuels, the U.S. military, and by extension the defense contractors, weapons manufacturers, and other stakeholders comprising the military industrial complex, have a vested interest in the fossil fuel industry. As Nnimmo Bassey, Nigerian environmental justice activist and director of the Health of Mother Earth Foundation (HOME-F), pointedly asks, “people are discussing loss and damage, but what of the damage caused by war?”

The U.S. military emits more greenhouse gasses than most countries combined. Yet military emissions have been officially excluded from international climate negotiations since the 1997 Kyoto Protocol and were not addressed by the 2015 Paris Agreement. Without taking into account environmental damage by militaries, it is impossible to fully address or respond to the impacts of climate change.

War and militarism are killing our planet and our people, disproportionately impacting those already most marginalized. Panganga Pungowiyi, climate geoengineering organizer with the Indigenous Environmental Network, highlighted the ways in which the military “dehumanize[s Indigenous peoples] through experimentation…in the Pacific Islands with thermonuclear tests… and in the arctic tundra where they injected people with radioactive iodine and spread radiation onto the tundra to see how our bodies would be impacted.”

Pungowiyi connected this colonial history of military violence to “false solutions to climate change [that] are being tested on our bodies through projects like the Arctic Ice Project which was being carried out through a naval base.” Indigenous communities continue to contend with the past and present harms of militarism while war-making and fossil fuel industries rake in billions of dollars by making business out of resource extraction and the ecological destruction of peoples’ homelands.

Further highlighting the hypocrisy that “war-profiteering industries are given trillions each year without impunity and…exempt from climate protocols,” Moñeka De Oro, an Indigenous Chamoru mother and co-founder of the Micronesia Climate Change Alliance, pointed out that “meanwhile, after almost 30 years Indigenous land and water defenders don’t even have a seat at the negotiating table at COP.” Excluding critiques of the military from those most directly impacted by climate devastation and militarism unfortunately remains the status quo.

Bassey, Pungowiyi, De Oro, and other members of Grassroots Global Justice Alliance (GGJ) traveled to Sharm El Sheikh, Egypt to attend COP27. As negotiations pressed on within closed doors, this group held a demonstration on U.S. Veterans Day to demand that the UNFCCC account for military emissions in its assessment of climate damage and call for a new way forward.

In preparation for the demonstration, the delegation created a banner showing the roughly 750 U.S. foreign military bases and their global reach. The map did not include political borders, and was even modified to remove the U.S. name, yet the banner was ultimately denied. Following the demonstration, the UN rapporteur informed our delegation that we had also violated protocols by naming countries–one of the speakers at the rally mentioned that he was from Palestine–and would need to take action if a formal complaint were levied. With the UNFCCC once again demonstrating its refusal to acknowledge the military’s impact on communities, ecosystems, and the climate, activists wondered how this conference could meaningfully create change and repair loss and damage.

Directly impacted peoples from around the world continue to demand reparations for climate damage while building grassroots solutions grounded in human rights and justice. Emphasizing the crucial links across social movements, Sharif Zakout, organizer at the Arab Resource & Organizing Center (AROC), emphasized that “if we believe in fighting for environmental justice, then we must also be anti-war. We cannot rely on those who continue to profit off the destruction of our earth to lead the way in finding solutions.”

Ending wars at home and abroad is imperative to curb climate catastrophe. Struggles led by military-impacted frontline communities represent a critical element of the climate justice movement. On the domestic front from New Mexico to Texas, Alaska to Guam, Hawai’i, Puerto Rico, long-term campaigns are being waged to defend land, air, and water from military contamination. At national and international levels, grassroots movements across the globe are mobilizing to make intertwined demands to demilitarize, decolonize, and detoxify.

Building a regenerative economy requires shutting down fossil-fueled military bases and operations, withdrawing military installations outside the United States and on occupied territories, and ensuring toxic remediation and a Just Transition of base sites to alternative healthy and resilient community uses. In short, it challenges false greenwashing solutions and requires instead a move toward repair and good relations.

As Pungowiyi warns, “Until our values lead the charge, and military values are eradicated, we will continue killing ourselves.”