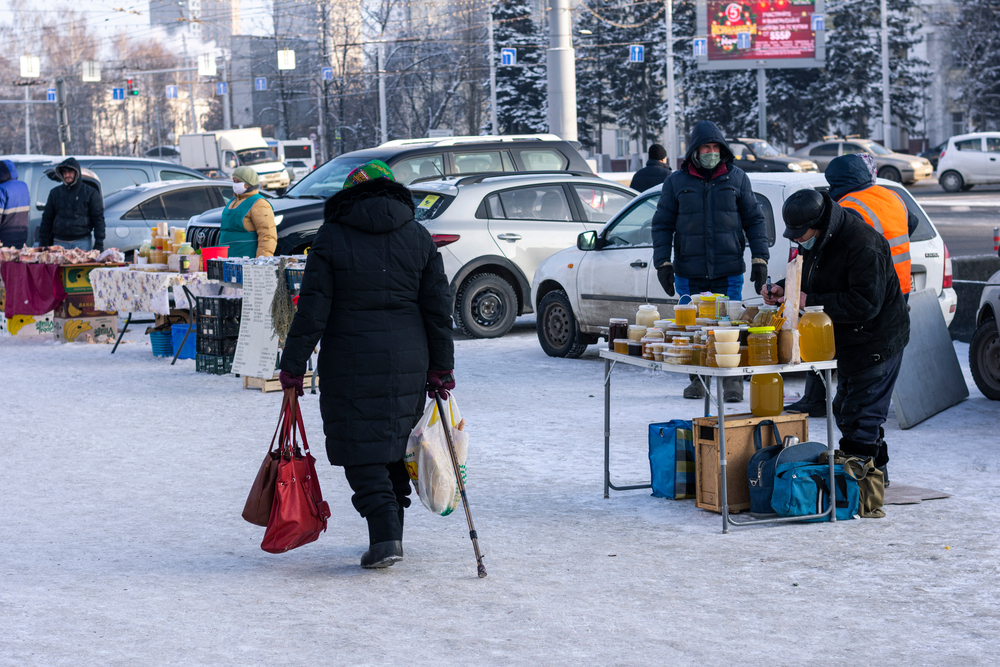 An elderly woman walks through one of Russia's winter markets (Shutterstock)

Ordinary Russians Are Already Feeling the Pain of Sanctions

Is punishing ordinary Russians the right response to Russia's invasion of Ukraine?
By Peter Rutland | March 2, 2022

Originally published in The Conversation.

The daily life of ordinary Russians – not just the country’s political elite or super rich oligarchs – is already being impacted by economic measures imposed by the international community in response to the invasion of Ukraine.

As a scholar of Russia’s political economy, I was surprised by the speed and severity of the Western economic response to the invasion of Ukraine. Whereas the sanctions that the West imposed after the annexation of Crimea in 2014 were generally quite ineffective – at best slowing Russian gross domestic product growth by 1% a year – this time they appear to be having an immediate impact. Just days into the conflict, we are seeing images of long lines of Russians attempting to get cash out of bank ATMs.

In the past few days, the U.S. has frozen the assets of the Russian central bank in Western jurisdictions – an unexpected move – and excluded most Russian banks from the SWIFT bank clearing system, which processes trillions of dollars’ worth of transactions every day.

This means Russian individuals and businesses will not be able to access any foreign bank accounts that they have. The Central Bank of Russia has tried to reassure the public, stating that the national bank transfer system can handle domestic transactions and that credit cards issued by Russian affiliates of Western banks should work inside Russia.

But the package of sanctions is seen by economists such as Sergei Aleksashenko and Sergei Guriev as unprecedented in its scope.

As news of the sanctions filtered out, Russians rushed to withdraw cash from ATMs and to dump rubles for other currencies, fearing a further depreciation of the national currency. A classic bank run appears to be underway, with the ruble losing 29% of its value and exchange booths offering 100 rubles to the dollar. Russia’s central bank is doing everything it can to shore up the value of the ruble.

The falling ruble pushes up the price of imports, which make up over half the consumer basket. Inflation in Russia was already a sensitive issue prior to the invasion of Ukraine, running at 8.7%. In 2021, global food prices rose 28%, and Russia imposed price caps and export duties on some basic food items.

The new sanctions will severely impact the living standard of ordinary Russians. A survey conducted in July 2021 found that around 75% of Russians spent around half their income or more on food, and that was before the recent price surge.

To try to protect the ruble, Russian President Vladimir Putin on Feb. 28, 2022, ordered a ban on sending cash abroad, and exporters must convert 80% of their earnings into rubles. The Central Bank of Russia also hiked its base interest rate from 9.5% to 20%. This should help stabilize the ruble but will make borrowing more expensive for businesses and thus increase the chance of a deep recession.

Russia’s foreign bonds are trading at 30 cents on the dollar and have been downgraded to junk status by Standard & Poor’s and Fitch ratings. This will make it harder for Russian businesses to raise money to invest, meaning less growth and employment in the medium to long term.

Russia hasn’t been completely excluded from the international financial system. The new sanctions do allow certain Russian banks that handle oil and gas exports to continue transactions in an attempt to limit the impact on European energy consumers.

As it is, the general uncertainty caused by the war has caused the world oil price to surge above $100 a barrel to levels not seen since 2014, and grain prices are spiking due to the disruption of shipments from Russia and Ukraine – which together account for around one quarter of global grain exports.

Even before the invasion, grain prices had risen 50% over the past year, leading Russia to ban fertilizer exports to help secure a good harvest this year. While Russian exporters benefit from high oil and gas prices, Russian consumers, along with consumers all around the world, will be paying more for fuel and food in future months.

The sanctions also bar the export of certain key technologies to Russia. Russia is unable to manufacture the latest generation of microchips due to a lack of manufacturing expertise. Taiwan, source of about 60% of the world’s chips, has agreed to join the sanctions. That means a broad range of goods, from smartphones to automobiles, could disappear from Russian stores.

Similarly, about 66% of medicines are imported, and it is not yet known if a mechanism will be created to enable Russians to pay for imports of medicines.

Whom will Russians blame for economic pain?

Any sanctions regime can be evaded by smuggling imports through third parties. However, the U.S. has become adept at tracking such transactions and going after sanctions breakers. In any account, the risks involved push up the price considerably.

All in all, this amounts to a grim scenario for Russian consumers and businesses. The economy is likely to plunge into recession, and many Russians are already experiencing the effects of the sanctions.

Revenue from oil and gas exports will continue to flow, and that will provide Putin with enough funds to maintain the state’s security apparatus and put down popular unrest. However, worsening personal economic circumstances might affect how Russians view the war.

In the past, Putin has tried to pass the blame for economic pain on to the West, but there is a chance that this time around, Russians might hold him to account.

Peter Rutland is a professor of government at Wesleyan University.