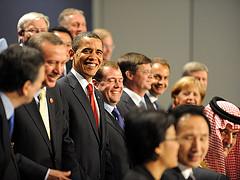 Our Global Senate and Its Flaws

The stakes are high at the G20, and the cards stacked against progressive financial reform.
By Didier Jacobs | June 23, 2010

They used to be seven. They embodied power and relished it. Other leaders envied their photo ops. They were the cream of the cream, the top of the top. They were the G7.

And now they are 20, and they meet in Toronto this week. The G20 is the Senate of our global government. It sets global economic policy, giving direction to an alphabet soup of global executive agencies, from the International Monetary Fund (IMF) to the Organization for Economic Cooperation and Development (OECD).

This week’s agenda is mindboggling. It includes a host of issues of utmost importance to your wallet: management of the fragile economic recovery, financial sector reform, reform of the IMF and World Bank, green taxation, and so on.

But the question arises: Who made these guys the leaders of the world?

The G7’s decision to pass the baton to the G20 is the most significant change in global governance of the past decade. We must warmly welcome it: Our global Senate now represents two-thirds of the world’s population, compared to a paltry 14 percent beforehand.

This dramatic democratization hasn’t been driven by altruism. By 2009, the so-called emerging economies had become too powerful economically to be ignored in the face of the worst crisis since the Great Depression. Richer countries needed these countries onboard.

But even with this expansion of membership, is our global senate legitimate?

A first obvious problem with the G20 is that the remaining third of the world’s population is effectively disenfranchised. Our global senators don’t represent low-income countries, which host 15 percent of humanity. Also, in our global Senate, a single country can filibuster bills. By putting a high premium on the status quo, the consensus rule produces conservative economic policy.

True, the G20 does not actually legislate. But it makes global policy that affects the income and wealth of every human being in three ways.

First, it coordinates its members’ macroeconomic policies. Fiscal and monetary policies are national policies. When the U.S. Federal Reserve and the central banks of the other G20 countries coordinate their monetary and fiscal policies, these coordinated policies become in effect global public policies: they affect everyone. So, for instance, when the Fed tolerates large swings in the dollar value because of a consensual position worked out at the G20, it can cost an American worker his job. For an African at the edge of subsistence, it can cost her life.

The G20 also sets policy for the World Bank and IMF, which spend the world’s taxpayer money. Even though the G20 does not have legal authority over these institutions, G20 members control a vast majority of the votes on their Boards. It’s easy to connect the dots.

Perhaps most importantly, the G20 sets global economic and financial norms, in fields as diverse as executive pay and accounting. Technically, these norms are not legally binding: both G20 and other countries are invited to translate them into national legislation or policy. Opting out is not always a real option, though.

Switzerland, for instance, is not part of the G20, but it has a large financial industry. If the G20 decided to increase the level of capital that banks must keep in reserves to protect themselves in case of crisis, you might think that Switzerland would have an interest to free ride. Global finance would be more stable thanks to the effort of G20 countries, while Swiss banks could gain a competitive edge by keeping a lower level of reserves. In reality, however, Switzerland would probably align with the global norm, even if unwillingly, for fear that the world would lose confidence in Swiss banks.

Free riding is not entirely absent in the financial sphere, though. Tax havens are the obvious example. But the G20 has the power to overcome free riding by relying on extraterritorial laws. For instance, G20 countries could outlaw any business between banks operating on their territories and banks operating in tax havens.

It would be hard for a G20 member to do that unilaterally. If, say, the United States passed such an extraterritorial law but Germany did not, German banks would become excluded from the U.S. market. That would be an unacceptable blow to global capitalism.

But if G20 members resolved to collective action and coordinated their national extraterritorial laws, it would work. Tax havens’ banks would become excluded from the whole G20 market and all other countries adhering to the G20 norm.

And that is pretty much what the G20 has set itself to do, albeit timidly. After 9/11, the United States led the charge with coordinated extra-territorial anti-terrorism laws to curb money laundering. Driven by national security interests, the G20 showed its real power. But progress on tax evasion has been slower. The rich — and their powerful banking and financial allies — have a vested interest in these tax havens.

It is hard enough to get 60 votes in the U.S. Senate to pass the financial reform bill. The reforming ambition of that bill is in turn limited by the modesty of collective action on the part of the G20. The United States can go only so far to reform capitalism at home without jeopardizing the global competitiveness of her financial industry. Finally, the modesty of the G20’s collective action is rooted in the consensus rule — the one-vote filibuster. Powerful special interests thus have plenty of venues to put sand in the gears of reform.

This week’s case in point is the global tax on the financial industry to recover the bailout money. The conservative Canadian government filibustered the measure at the finance ministers’ level two weeks ago (while some other G20 members wavered). It’s up to the Canadian prime minister to uphold that opposition to the G20 meeting. If he blinks, that would be good news for financial reform.

Canada’s intransigence is, in one way, refreshing. In theory, all G20 members are equal, so it is important that a relatively small economy like Canada can prove that it is the equal of its more powerful G20 colleagues. It remains to be seen, however, whether South Africa will ever have the guts to veto a G20 policy without fear of being disinvited.

The bottom line, though, is that one-vote filibusters would be a bad idea for the US government, and are likewise a bad idea for our global government. As the importance of global problems requiring global solutions grows, majority voting will eventually become necessary to advance the economic reforms we so desperately need.

Didier JacobsDidier Jacobs is a contributor to Foreign Policy In Focus and the author of Global Democracy. He is special advisor to the president at Oxfam America. Before joining Oxfam, he was a researcher at the London School of Economics and Catholic University of Louvain, as well as an aid worker for Médecins Sans Frontières in Liberia during the civil war.