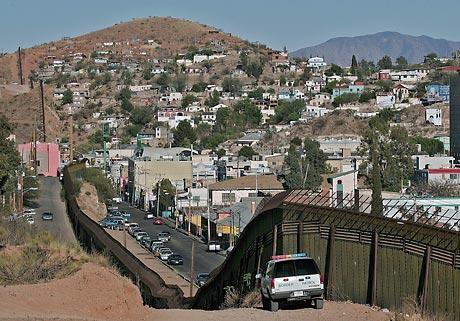 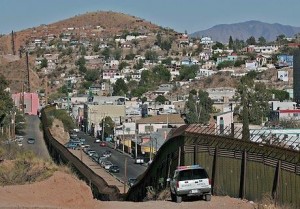 Even as U.S. congressmen demand increased border security as a condition of support for changes in immigration law, recent statistics indicate that the number of people attempting to cross the U.S.–Mexican border has decreased dramatically. Interestingly, the crossings at issue all go one way: Americans, after all, are not sneaking into Mexico. This should tell us something.

What causes unidirectional movement? If the Mexican and U.S. populations were liquids separated by a semi-permeable membrane, with all movement across the membrane observed to be in one direction, we would be talking about osmotic pressure. Where there is a differential in the conditions on two sides of a membrane, components necessarily travel from one side to the other until equilibrium is established.

We have thus far focused our attention on the symptom—Mexicans crossing the semi-permeable barrier into the United States—and treated the crossing itself as the problem to be solved. In other words, policy makers have been preoccupied with figuring out how to make the border less permeable.

But this is a fool’s errand. As we might surmise from physics, as long as the differing conditions on the two sides persist, there is going to be movement. Nothing short of a totally impermeable and very expensive barrier (dug into the earth, reaching to the sky, and continuously policed) is going to stop the movement.

Maybe it is time to start looking at the pressures that drive unidirectional movement instead of at the symptom. Then we can determine what the underlying problem is—assuming, of course, that there is one.

Migration per se can’t be the problem; most of the planet is peopled by groups that have migrated from elsewhere, and historically immigration has been a net benefit to the United States. Mexicans with money to invest can legally obtain a visa, so they aren’t the problem either.

Narrowing the population of potential “problems,” it appears that what we are primarily complaining about are low-skilled workers, whether farm workers or manual laborers, who individually conclude that their earning potential is greater on the U.S. side of the border—so much so, in fact, that they are willing to risk crossing a treacherous desert to endure a perilous legal and social status north of the border. It is this fact—a human and economic problem in its own right—that is the real puzzle to be solved.

So what might be done to equalize this “osmotic” pressure across the barrier? If the basic membrane analogy holds, this would undoubtedly require improving conditions in Mexico, and eventually in the other countries whose citizens pass through it on their journey north. (Let’s put aside the option of making things worse on the U.S. side—although the deteriorating economic conditions of the Great Recession did have the effect of discouraging migration.)

For starters, there are a number of U.S. policies that have a direct bearing on the quality of life in Mexico.

To the extent that difficulties on the Mexican side are caused by U.S. drug policies, for example, it is completely within our power to change the equation. Legalization would immediately eliminate the crime, corruption, and smuggling that inevitably accompany the trade in a commodity that has been declared illegal. The United States found out firsthand during the prohibition of alcohol (1920 to 1933) that illegality created more problems than it solved, and the same is true of drug prohibition. Legalization would go a long way toward improving the rule of law in Mexico—a predicate for economic growth. As long as we insist on inflicting our failed drug policies on Mexico, we should not complain about Mexicans trying to cross to the more peaceful and predictable U.S. side of the border.

We also need to stop flooding Mexico with guns, a problem inextricably bound up with the U.S. war on drugs. More stringent controls on cross-border arms sales—especially to governments with questionable human rights records, but also to individual buyers—would go a long way towards mitigating the gun violence in Mexico that is often sourced to the United States.

But it’s not just violence that is to blame. We also should also reexamine the results of NAFTA. The treaty has opened Mexico to more U.S. products and businesses, but it has also left an impoverished class of displaced workers that sees stealing across the border as the best option.

And of course there is the matter of U.S. immigration policy itself. For one thing, we could revise guest-worker regulations to make it easier for U.S. businesses to hire the labor they need while allowing job flexibility and labor protections for Mexican workers, ensuring that they do not become dependent on an employer that is liable to abuse them. A program that allows workers to go back and forth legally would also reduce family disruption and all the social problems it engenders.

These would all be positive steps, but none of this fully explains why there are insufficient good jobs in Mexico. What might Mexico do differently?

What can we do to support Mexico in becoming as attractive an environment as the United States? We need to think broadly about eliminating problems that we create as well as supporting internal Mexican initiatives. Planning should involve presidential-level leadership to identify problems and devise comprehensive solutions. Random USAID-funded projects in Mexico are not doing the trick.

The ineffectiveness of the Mexican education system is an internal problem constraining Mexican productivity. The recent arrest on corruption charges of Elba Esther Gordillo, the head of the Mexican national teachers’ union, shows that President Enrique Peña Nieto may be serious about addressing this shortcoming. U.S. education policies are not exactly a world model, but perhaps the United States can help with funding or training if requested by the Mexican government.

How about economic liberalization? Besides reducing the power of monopolies as the president may now be attempting, things as simple as reducing the number of signatures needed for a business license might be huge. As Hernando De Soto pointed out more than 20 years ago, individuals locked into the informal economy due to inability to regularize their businesses and land holdings can never prosper. U.S. foreign aid to Mexico might be conditioned on steps that remove such internal barriers to economic productivity.

A joint U.S.–Mexican declaration of intent to reduce the differential across the semi-permeable border would direct attention towards the various drivers of migration and away from the symptom of cross-border movement. If we are looking for metrics to see whether changes are having an effect, we could do worse than tracking the number of people trying to cross. Real success might be signaled by people sneaking into Mexico.

Inge FryklundMs. Fryklund, JD, PhD has worked in the Balkans, Central Asia, Afghanistan, Iraq, and Palestine. She is interested in the political and economic factors that drive individual and family decisions to relocate. She can be reached at inge.fryklund@gmail.com.