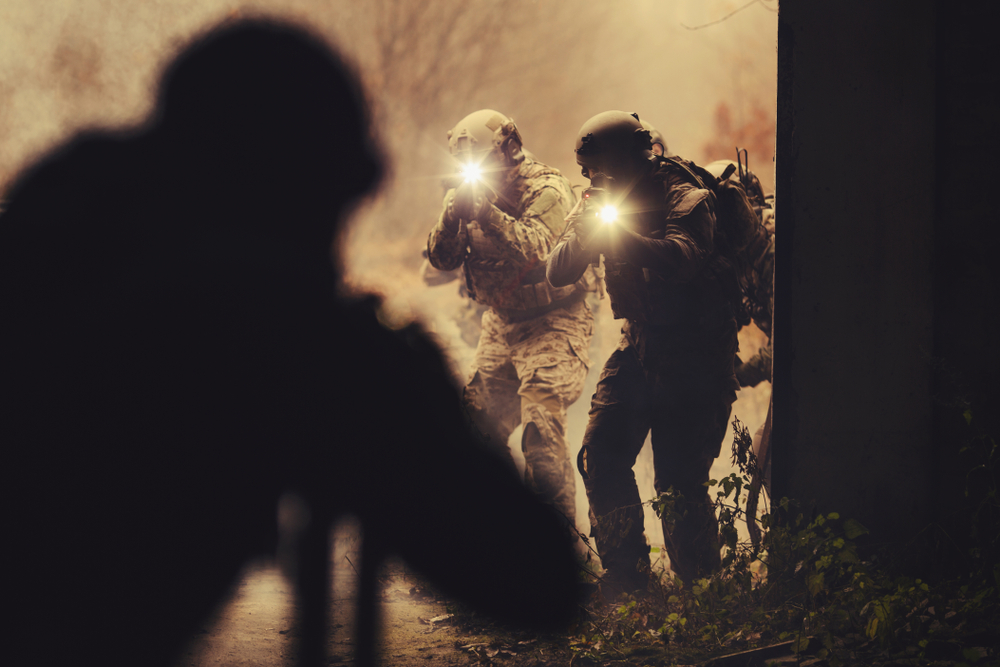 Glorifying serial killer-type behavior most service members would find appalling is a strange way to honor them.
By Peter Certo | May 23, 2019

How are you spending Memorial Day? Ordinary people may attend parades, host cookouts, or take the long weekend to visit loved ones.

Donald Trump, on the other hand, may pardon a few war criminals.

There’s SEAL chief Edward Gallagher, who senselessly shot to death a teenage girl and an elderly man in Iraq. Gallagher also brutally stabbed a wounded 15-year-old to death — and then posed for photos with the body, which he texted to friends.

Trump also requested the files of Nicholas Slatten, a Blackwater contractor convicted of shooting dozens of Iraqi civilians in the notorious 2007 Nisour Square massacre, and of Mathew Golsteyn, who confessed to murdering an unarmed Afghan captive U.S. soldiers had released.

Trump has already pardoned Michael Behenna, who took an unarmed Iraqi captive into the desert, stripped him naked, and shot him in the head and chest. Behenna was supposed to be returning the man to his home village.

The president may present these pardons as a show of patriotism — his own Rambo-worshiping way of “supporting the troops.” But several veterans have objected, pointing out that many soldiers do their best to uphold the laws of war even under considerable stress.

“They should treat the civilians as they would neighbors,” combat veteran Waitman Wade Beorn recalled telling his platoon in Iraq, arguing that the cues commanders set make all the difference. Beorn, a Holocaust scholar, warned that one could draw some dark (if inexact) parallels between Trump’s cues and Hitler’s.

During the Nazi invasion of the Soviet Union, he wrote, “soldiers were literally told that they would not be tried for behavior that would be a crime anywhere else in Europe.” Similarly, “when Trump champions war criminals as brave patriots … he seems to push for a climate that condones unethical and criminal behavior.”

Gary Solis, a retired military judge and Vietnam veteran, complained Trump was undermining the entire military justice system. “These are all extremely complicated cases that have gone through a careful system of consideration. A freewheeling pardon undermines that whole system.”

That’s likely the point. The truth is that Trump is pandering to the most atavistic segment of his base. It echoes the Vietnam years, when war supporters turned William Calley, convicted for his role in butchering hundreds of villagers at My Lai, into a folk hero.

Today, Gallagher’s cause is celebrated on “Fox and Friends,”  the president’s favorite TV show, and Trump has praised Gallagher “in honor of his past service.”

Trump’s recent moves are plainly calibrated to encourage war crimes, not prosecute them. But glorifying serial killer-type behavior most service members would find appalling is a strange way to honor them —  particularly when some have taken enormous risks to stop massacres like these.

For instance, seven of Gallagher’s own men reported him repeatedly, even after being warned by superiors it would hurt their careers. Behenna’s fellow soldiers, apparently disturbed by his behavior, testified against him as well. At My Lai, Army helicopter pilot Hugh Thompson landed his chopper in between marauding U.S. troops and cowering civilians, training his guns on his own comrades and forcing an end to the massacre.

Honoring these heroes would be more fitting, particularly in the present climate. Recent reports have documented alarming rates of U.S.-inflicted civilian casualties in Somalia, Syria and Afghanistan. In the latter case, Trump’s extremist national security adviser John Bolton made brutish threats to get the International Criminal Court to back off investigating U.S. abuses.

Meanwhile, egged on by Bolton, Trump is considering sending 120,000 or more troops into another purposeless bloodbath in the Middle East. And he’s made no plans to fill the 45,000 or so vacant VA jobs backlogging veterans’ health care.

Under these circumstances, do we suppose the troops — or loved ones who’ve lost them — will take a few pardons for war criminals as a compliment? I don’t know. But the real lesson may be that the worst war criminals wear suits, not fatigues.