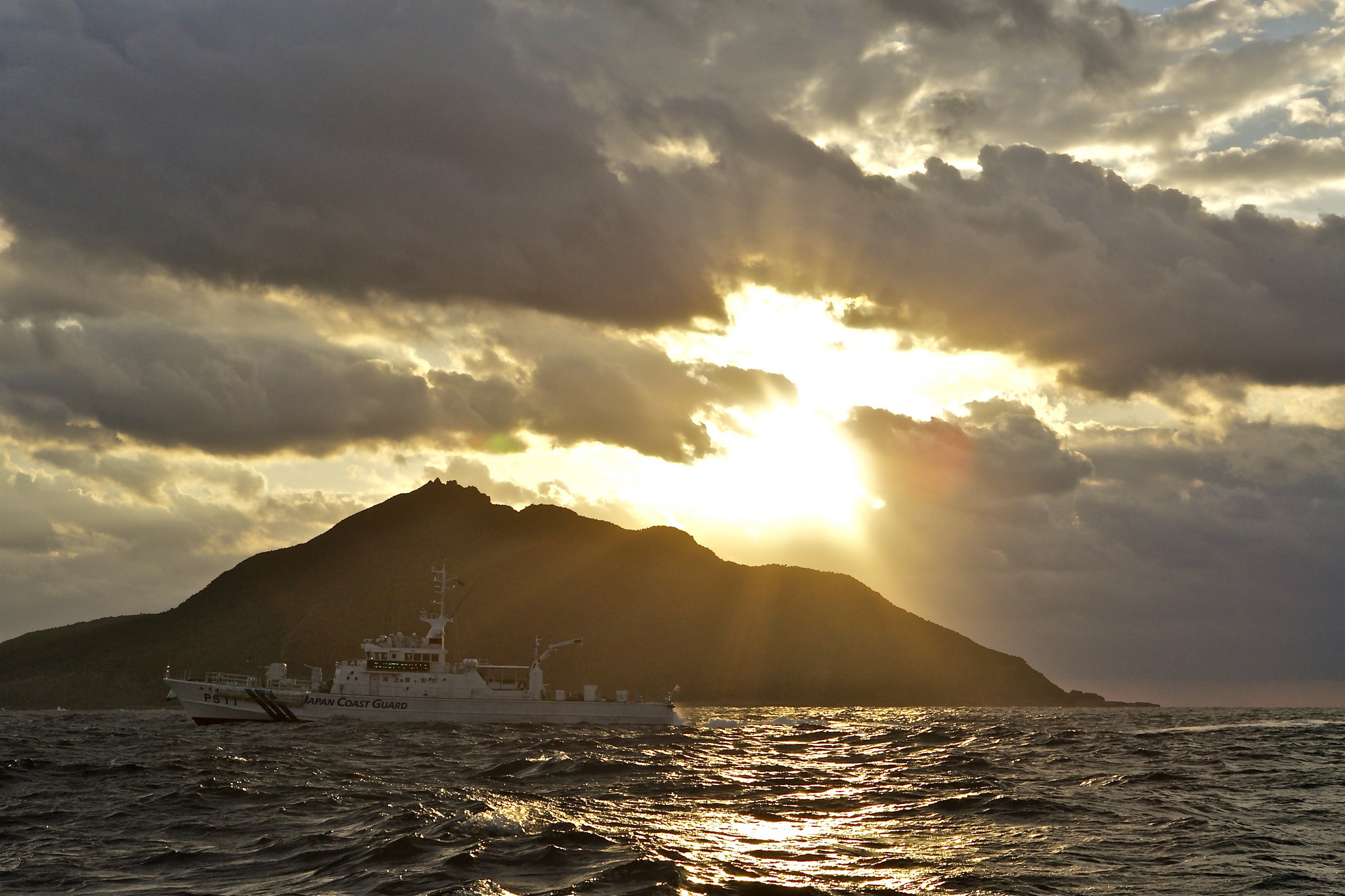 The simmering tensions in East Asia are echoes of Washington's Cold War intrigues—and the Pentagon's not-so-secret plans for battle with China.
By Conn Hallinan | July 29, 2014

The past six months have seen an incredible ratcheting up of tensions in the East and South China Seas, where the world’s three largest economies—China, the United States, and Japan—are caught up in an increasingly tangled web of territorial disputes, competing alliances, and historical grievances.

In February, U.S. Secretary of State John Kerry assured Japan that the Americans would defend Japan in case of a military confrontation between Tokyo and Beijing.  That same month, U.S. Chief of Naval Operations Admiral Jonathan Greenert said the Philippines could count on American support if there were a clash with China in the South China Sea.

In early May, the Japanese Self-Defense Forces practiced “retaking” islands of the Amami Group near Okinawa in a not-so-subtle challenge to China over the ownership of the Diaoyu/Senkaku Islands in the East China Sea. That same week, U.S. and Philippine forces held joint war games, while President Barack Obama promised “ironclad” support against “aggressive” neighbors interested in “changing the status quo” in Asia.

Since then, the competing claims have only escalated. In mid-May, China challenged Japanese ownership of Okinawa, stating it did “not belong to Japan,” challenging Tokyo and indirectly calling into question the presence of huge U.S. bases on the island.

Tokyo responded by digging in its heels. Later that month, Japanese Prime Minister Shinzo Abe pledged that Tokyo would support the Philippines, Vietnam, and other members of the Association of Southeast Asian Nations (ASEAN) in their disputes with Beijing over islands and shoals in the South China Seas. And most recently, on July 1, the Abe government “re-interpreted” Article 9 of its peace constitution to allow Japan to use military force in support of its allies. U.S. allies in the region supported the move.

The Philippines, meanwhile, has agreed to allow the U.S. military use of the former American base at Subic Bay.

There are points of friction seemingly everywhere. American naval vessels have accused the Chinese Navy of playing chicken off China’s coast. Chinese ships are blockading Philippine ships near a number of disputed shoals and reefs. Vietnam claims China rammed some of its ships. Japan scrambled a record number of fighter planes to intercept supposed incursions by Chinese and Russian aircraft. U.S. Senator John McCain called China “a rising threat,” and the Pentagon’s Frank Kandell told the House Armed Forces Committee that U.S. military superiority in the Pacific was “not assured.”

In short, “tense” doesn’t quite describe the situation in Asia these days—more like “scary.”

The Peace Treaty That Could Start a War

A major source of this friction are two documents most Americans know nothing about: the 1951 San Francisco Treaty that ended World War II in Asia, and a little-known doctrine called the AirSea Battle plan.

According to research by Kimie Hara, the Director of East Asian Studies at Ontario’s Renison University College and the author of numerous books on the Cold War in Asia, today’s tensions were purposely built into the 1951 Treaty. “Close examination of the Allies’ documents, particularly those of the United States (which was primarily responsible for drafting the peace treaty), reveals that some, if not all, of these problems were intentionally created or left unresolved to protect U.S. strategic interests,” she writes. Neither China nor Korea was invited to the treaty talks, and while the USSR was present, it was not a signatory.

Hara says the United States wanted to create “strategic ambiguity” and “manageable instability” that would allow it to continue stationing a major military presence in the region. The examples she gives are the ongoing disagreements and tensions over the Kuril/Northern Territories Islands, the Dokdo/Takeshima islands, the Senkaku/Diaoyu islands, the Spratly/Nansha, and the Paracel/Xisha islands—and not to mention the divided Korean peninsula and the Taiwan Straits. All of these—plus a few others—have led to confrontations among Japan, China, Russia, the Philippines, Vietnam, South Korea, North Korea, Malaysia, and Brunei.

Sometimes the U.S. government directly sabotaged efforts to resolve issues among Asian nations. In 1954, Japan and the Soviet Union restored diplomatic relations and were on the verge of cutting a deal over the Kurlies/Northern Territory islands, essentially splitting the difference: Japan would take two islands, the USSR another two.

However, Washington was worried that a peace treaty between Tokyo and Moscow would eventually lead to diplomatic ties between Japan and communist China, which would have exerted, says Hara, “considerable pressure on the United States to vacate Okinawa, whose importance had significantly increased as a result of the Americas’ Cold War strategy in Asia.” Okinawa was a major base for the United States during the Korean War.

So Washington torpedoed the deal, telling Tokyo that if it did not demand all four islands, the United States would not return Okinawa—which had been controlled by the U.S. military since the end of World War II—to Japan. The U.S. knew the Soviets would reject the Japanese demand, which would scuttle efforts to reduce tensions between the two nations. There is still no peace treaty between Russia and Japan.

A Land Invasion of China?

AirSea Battle (ASB) has been official U.S. military doctrine in Asia since 2010, and what it calls for is chilling: the military defeat—World War II style—of China. Not even during the height of the Cold War did the United States and it allies envision defeating the Soviet Union in military combat, seeking to rather “contain” it.

In the 1990s, China began building a military that could defend its coastal waters. Called “denial of access,” its strategy incorporates a variety of anti-ship and ballistic missiles, stealth submarines, cyber warfare, and space surveillance. China’s turn from its traditional reliance on land forces to “denial of access” was given a major push in 1996, when the Clinton administration deployed two aircraft carrier battle groups in the Taiwan Straits during a period of tension between China and Taiwan. Beijing could do nothing about it, and the Chinese military was deeply embarrassed.

ASB is designed to neutralize “denial of access” by “blinding” Chinese radar and surveillance capabilities, destroying missile sites and command centers, and, according to Amitai Etzioni of George Washington University—author of books on U.S. foreign policy and a former senior adviser to the White House under Jimmy Carter—allowing U.S. military forces to “enter contested zones and conclude the conflict by bringing to bear the full force of their material military advantage.”

The potential dangers involved in such an undertaking are sobering. Since ASB would entail strikes deep into Chinese territory, Beijing might assume such attacks were directed at China’s nuclear weapons arsenal. The general rule with nukes is “use them or lose them.” According to Etzioni, the Center for Strategic and International Studies concludes that “China is likely to respond to what is effectively a major attack on its mainland with all the military means at its disposal—including its stockpile of nuclear arms.”

While Pentagon officials claim that ASB is not aimed at any particular country, China is the only power in Asia capable of “access denial” to the U.S. military. Etzioni quotes one “senior Naval official” as saying “AirSea Battle is all about convincing the Chinese that we will win this competition.”

The Chinese are fully aware of ASB, which does much to explain their recent assertiveness in the East China Sea. The Diaoyu/Senkakus are part of the “first island chain” through which Chinese submarines and surface craft must pass in order to exit Chinese coastal waters. If Japan controls those islands, it can detect—and with anti-ship missiles, destroy—anyone going from China to the Pacific.

Aggression in the South China Sea

China has a good case that Japan’s claim to the Diaoyu/Senkakus violates the 1945 Potsdam Agreement. Potsdam was supposed to dismantle Japan’s empire, including territories that it had seized during its years of expansion. The Diaoyu/Senkakus were absorbed by Japan following the 1894-1895 Sino-Japanese War, so China has a solid ownership argument.

However, China can make no such case for the Spratlys, Parcels, or reefs and shoals of the South China Sea. It may be that defense considerations are driving some of those disputes—most of China’s energy supplies transit the region—but oil, gas, and fishing rights would seem to loom larger.

In any case, China appears to be in violation of the 1982 UN Convention on the Law of the Sea that guarantees countries a 200-nautical-mile “exclusive economic zone.” China, using a 19th-century “nine-dash line” map, claims “indisputable sovereignty” over 3.5 million square kilometers of the South China Sea, a sea that borders six nations and through which one third of the world’s shipping passes.

While China’s forceful behavior in the East China Sea is somewhat understandable, Beijing’s decision to throw its weight around in the South China Sea has given the United States an opportunity to exploit the situation. Because of tensions between China and the Philippines, the U.S. military was recently invited back into the islands, which had expelled the United States in the 1990s. And China’s unilateral actions in the Paracels have some Vietnamese talking about a military relationship with Washington.

Taking a Step Back

All sides need to take a step back.

China should adhere to a 2002 ASEAN code of conduct to negotiate its disputes with Vietnam and the Philippines and to bring the issue of the Diaoyu/Senkakus before the International Court of Justice.

The United States should back off its blank check support for the right-wing Abe government in Japan. Tokyo started this fight in 2010 by first arresting a Chinese fisherman—thus violating an agreement not to apply domestic trespassing laws to fishing violations—and then unilaterally declaring sovereignty over the Diaoyu/Senkakus in 2012, a violation of a 1972 agreement with China to leave that issue up to negotiations.

Washington should also reverse its expensive expansion of military forces in Asia—the so-called “Asia pivot”—and reconsider the folly of the AirSea Battle doctrine. According to Raoul Heinrichs of Australian University, ASB “will greatly increase the range of circumstances for maritime brinkmanship and dangerous naval incidents.” Establishing military “hot lines” between the major powers in the region would also be helpful.

The current tensions reflect exactly what the San Francisco Treaty was designed to do: divide and conquer. But with the potential dangers of escalation embedded in the doctrine of AirSea Battle, local tensions are threatening international order.