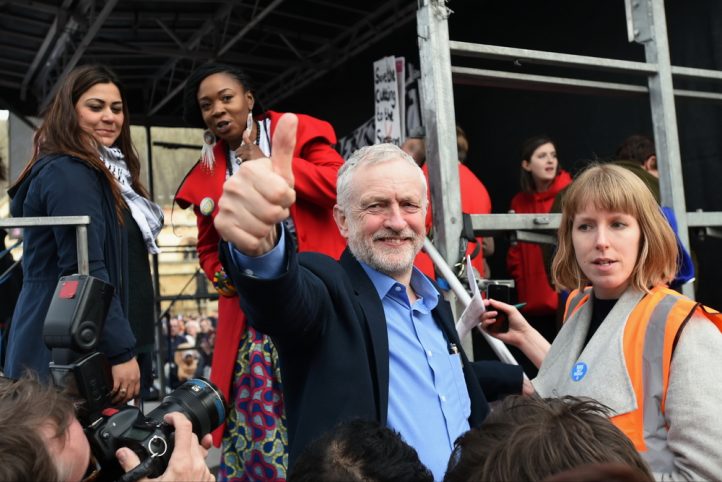 Does the British Labor Party and its leader, Jeremy Corbyn, have an “anti-Semitism problem,” or has the party’s left wing been targeted by the Israeli government for its support of the growing boycott and divestment movement that challenges Israel’s illegal occupation of Palestinian land?

A group of Israeli lawyers and social activists would like to know the answer to that question and have filed a Freedom of Information action in an effort to find out.

Spearheaded by Israeli human rights activist Eitay Mack, the request targets Israel’s Ministry of Strategic Affairs and Ministry of Foreign Affairs to “verify that these play no part in the de-legitimization waged in recent years on the UK Labor Party and Mr. Corbyn.”

The Labor leader has been called an “anti-Semite and a racist” by one of the party’s members of Parliament, and in a recent tweet Israeli Prime Minister Benjamin Netanyahu accused Corbyn of honoring Palestinians who took part in the attack on Israeli athletes during the 1972 Munich Olympics.

Corbyn has long been a leader in the fight against racism and played a key role in helping to bring down the apartheid regime in South Africa. He has also made it no secret that he makes common cause with the Palestinians and supports the Boycott and Divestment Sanctions (BDS) aimed at forcing Israel to withdraw from the Occupied Territories.

In 2014, the Labor Party went through a sea change politically, moving away from the centrist programs of Tony Blair and Gordon Brown and embracing left social democratic positions that Labor had not advocated for more than two decades. Corbyn resisted the endless austerity and privatization program of the Conservatives — many of which Labor had gone along with — and called for a robust program of re-nationalizing transport and energy, pumping money into health and education, and raising taxes on the wealthy.

The platform re-energized Labor’s grassroots, and hundreds of thousands of young people joined up. At 600,000 members, the UK Labor Party is now the largest party on the European continent. In the 2015 election, Labor picked up 33 seats in Parliament and turned the Tories into a minority government.

Almost as soon as Corbyn took over the party, the attacks that he was anti-Semitic — or at least tolerated anti-Semitism — started up. He was accused of comparing Israel to the Nazis. He was charged with honoring the Black September Palestinian group, whose 1972 attack in Munich resulted in the death of 11 Israeli athletes. He was denounced for backing a London street mural that had clear anti-Semitic images.

Finally, the three leading Jewish newspapers in the UK jointly declared that there was a “crisis of anti-Semitism” in the British Labor Party and that Corbyn was “an existential threat to Jewish life in the UK.”

But once one begins to unpack the charges it is hard to find much evidence for a “crisis.”

Polls show the Labor Party is considerably less anti-Semitic than the Conservative Party, and it appears that anti-Semitism has declined since Corbyn took over. A number of the things Corbyn is accused of have been either distorted or fabricated.

Corbyn did not compare Israel to the Nazis. It was Holocaust survivor Hajo Meyer who did so in a 2010 panel discussion that the Labor Party leader took part in. Meyer was upset with the 2009 Israeli bombing of Gaza — Operation Cast Lead — that killed 1,391 Palestinians, the majority of them civilians. He was referring to the fact that Gaza’s residents could not leave the strip and compared it to Jews unable to flee the Warsaw Ghetto.

Corbyn did not place a wreath to honor the Black September group. The event was to commemorate a 1985 attack on the headquarters of the Palestine Liberation Organization in Tunisia by Israeli warplanes that killed 47 people and wounded 65 more. The attack was officially condemned by the UN Security Council with the assent of the United States. The Black September members killed in Munich are buried in Libya, not Tunisia, although one of the group’s leaders, Salah Khalaf, is interned near where the memorial took place.

On the basis of free speech, the Labor leader initially did defend a mural with anti-Semitic elements. But when he looked at the painting closely, he apologized and said that free speech should never be used to mask anti-Semitism.

Lastly, Corbyn’s wing of the Labor Party is accused of resisting adopting an 11-point definition of anti-Semitism created by the International Holocaust Remembrance Alliance in 2016. Corbyn did resist parts of the definition because many Labor activists fear that the list conflates criticism of Israel with anti-Semitism. Even the architect of the document, Kenneth Stern, said it was meant to be a “working definition,” not a way to curb academic research and free speech. “Yet that is how it has come to be used.”

Meanwhile, there is evidence that the Netanyahu government is trying to do exactly that, arguing that by “de-legitimizing” Israel, the growing boycott movement constitutes anti-Semitism, thus equating criticism of Israel with anti-Semitism.

A study by historian David Feldman, director of the Pears Institute for the Study of Anti-Semitism at Birkbeck College, found that the overwhelming majority of charges against Labor Party members concerned statements about Israel, not Jews.

Stephen Oryszczuk, foreign affairs editor of the leading Jewish newspaper, Jewish News, said that criticizing Israel “was not anti-Semitism,” and that the charges against Corbyn were “repulsive,” adding “This is a dedicated anti-racist we are trashing.”

As the two-state solution disintegrates under the relentless expansion of Jewish Israeli settlements — one recent plan calls for reaching a goal of 1 million settlers by the end of this year — and the controversial move to favor Jewish Israelis over other citizens, Israel may indeed be more vulnerable to a boycott movement. It is hardly surprising then that the Netanyahu government would try to nip the BDS in the bud.

Israeli lawyer Mack is looking for evidence that the campaign against Corbyn is encouraged and supported by the Foreign Affairs and Strategic ministries, and is suspicious that a “crisis” exists in the Labor Party. “Israel is strengthening its relationships in Eastern Europe, with countries like Hungary, Poland, Ukraine, where they have problems with anti-Semitism,” he told Mondoweiss. “On the other hand you see the Israeli government making their political struggle with Jeremy Corbyn a main issue.”

That suspicion is supported by a 2017 sting operation by Al Jazeera that uncovered a direct liaison between diplomat Shai Masot of London’s Israeli embassy and organizations like Labor Friends of Israel that are leading critics of Corbyn. Masot works for the Ministry of Strategic Affairs. And more than encouragement was exchanged. According to Al Jazeera, up to 1 million pounds ($1.3 million) were made available to fuel the campaign.

Virtually every tabloid in the British Isles has joined the hue and cry. The publication ColdType counted more than 500 articles on the subject from July to August of this year. Nominally liberal publications like the Guardian have led the campaign. Most newspapers in the UK are more conservative than their continental — or American — counterparts, and, in the Guardian’s case, the publication is carrying water for the Labor Party’s right wing.

In short, Corbyn is up against a powerful alliance of the mainstream media, the Conservative Party, and “Blairites” in the Labor Party, with Israel in the wings. And Corbyn’s response to apologize — what for is not exactly clear — and to drum dissidents out of the Party has not quelled the fires, but added fuel to them. Indeed, Labor recently adopted the 11-point definition of anti-Semitism.

What about the effect of all this is on the electorate?

According to You/Gov, many of the stories that “obsess the Westminster media” don’t resonate much with the wider public. In spite of non-stop and widespread coverage, only 6 percent of the public say they are following it closely, 20 percent fairly closely, and 54 percent are either not following it or are unaware the story exists. The poll concludes that while the “affair may entrench existing negative views of Corbyn among those who already held them, it seem unlikely to do much to reduce his support.”

Labor leads in the polls, but its margin is thin, drawing between 38 and 40 percent support to the Conservatives’ 37 to 38 percent. The Liberal Democrats are polling around 10 percent, and the racist United Kingdom Independence Party 5 percent.

However, British polling has been notoriously wrong-headed in the past. Polls predicted Brexit would fail. It passed. The polls predicted the Conservatives would trounce Labor in the 2017 elections. The outcome was vice versa.

Labor did well in this year’s local council elections, although the media made it seem like a failure by puffing up the numbers the party was projected to win. Labor picked up 79 council seats while the Conservatives lost 35. (The Liberal Democrats secured 77 seats, but that was largely a rebound from the disastrous showing in 2014 local elections that saw the party lose 300 seats.)

According to a BBC analysis, if the local election results were replicated in a general election, Labor would be the majority party in Parliament with 283 seats to the Tories’ 280. While the Conservatives were down 3 percent of the vote over the 2017 local elections, Labor was up 8 percentage points.

“People thought the general election was a fluke,” said John McDonnell, the Labor Party’s Shadow Chancellor of the Exchequer. “We’ve demonstrated it wasn’t. We’ve consolidated that and we’ve moved it forward in terms of percentage share of the vote.”

Which doesn’t mean the controversy may not have an effect, especially if right-wing Labor supporters bolt and create a new party. That would drain some of Labor’s support and divide the vote in the next general election. Such a split would probably keep the Tories in power. There are some in Labor’s camp who would rather lose an election than have Corbyn and the left wing of the party in power.

Letting Real Anti-Semites off the Hook

And there is a danger that worries Mack.

“Israel is claiming that Corbyn and the Labor Party are putting British Jews at risk,” he says. “But the bottom line is that the Netanyahu government itself is actually enlarging the risk for the Jewish people around the world, because they are not dealing with real problems, just the artificial problems. They are not concerned with real anti-Semitism, they only want to fulfill their political agenda of taking the issue of the Palestinian people off the world stage.”

And there are growing numbers of real anti-Semites in Europe and the U.S. — including the representatives of certain far-right governments that Israel is currently friendly with — who may not be a threat to Netanyahu, but most certainly are a threat to Jews living outside of Israel.