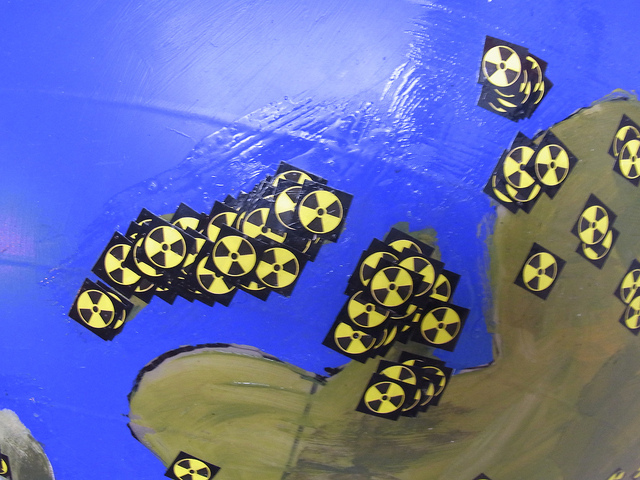 Peer-to-Peer Science: The Century-Long Challenge to Respond to Fukushima

More than two years after an earthquake and tsunami wreaked havoc on a Japanese power plant, the Fukushima nuclear disaster is one of the most serious threats to public health in the Asia-Pacific, and the worst case of nuclear contamination the world has ever seen. Radiation continues to leak from the crippled Fukushima Daiichi site into groundwater, threatening to contaminate the entire Pacific Ocean. The cleanup will require an unprecedented global effort.

Initially, the leaked radioactive materials consisted of cesium-137 and 134, and to a lesser degree iodine-131. Of these, the real long-term threat comes from cesium-137, which is easily absorbed into bodily tissue—and its half-life of 30 years means it will be a threat for decades to come. Recent measurements indicate that escaping water also has increasing levels of strontium-90, a far more dangerous radioactive material than cesium. Strontium-90 mimics calcium and is readily absorbed into the bones of humans and animals.

The Tokyo Electric Power Company (TEPCO) recently announced that it lacks the expertise to effectively control the flow of radiation into groundwater and seawater and is seeking help from the Japanese government. TEPCO has proposed setting up a subterranean barrier around the plant by freezing the ground, thereby preventing radioactive water from eventually leaking into the ocean—an approach that has never before been attempted in a case of massive radiation leakage. TEPCO has also proposed erecting additional walls now that the existing wall has been overwhelmed by the approximately 400 tons per day of water flowing into the power plant.

But even if these proposals were to succeed, they would not constitute a long-term solution.

Solving the Fukushima Daiichi crisis needs to be considered a challenge akin to putting a person on the moon in the 1960s. This complex technological feat will require focused attention and the concentration of tremendous resources over decades. But this time the effort must be international, as the situation potentially puts the health of hundreds of millions at risk. The long-term solution to this crisis deserves at least as much attention from government and industry as do nuclear proliferation, terrorism, the economy, and crime.

To solve the Fukushima Daiichi problem will require enlisting the best and the brightest to come up with a long-term plan to be implemented over the next century. Experts from around the world need to contribute their insights and ideas. They should come from diverse fields—engineering, biology, demographics, agriculture, philosophy, history, art, urban design, and more. They will need to work together at multiple levels to develop a comprehensive assessment of how to rebuild communities, resettle people, control the leakage of radiation, dispose safely of the contaminated water and soil, and contain the radiation. They will also need to find ways to completely dismantle the damaged reactor, although that challenge may require technologies not available until decades from now.

Such a plan will require the development of unprecedented technologies, such as robots that can function in highly radioactive environments. This project might capture the imagination of innovators in the robotics world and give a civilian application to existing military technology. Improved robot technology would prevent the tragic scenes of old people and others volunteering to enter into the reactors at the risk of their own wellbeing.

The Fukushima disaster is a crisis for all of humanity, but it is a crisis that can serve as an opportunity to construct global networks for unprecedented collaboration. Groups or teams aided by sophisticated computer technology can start to break down into workable pieces the immense problems resulting from the ongoing spillage. Then experts can come back with the best recommendations and a concrete plan for action. The effort can draw on the precedents of the Intergovernmental Panel on Climate Change, but it must go far further.

In his book Reinventing Discovery: The New Era of Networked Science, Michael Nielsen describes principles of networked science that can be applied on an unprecedented scale. The breakthroughs that come from this effort can also be used for other long-term programs such as the cleanup of the BP Deepwater Horizon oil spill in the Gulf of Mexico or the global response to climate change. The collaborative research regarding Fukushima should take place on a very large scale, larger than the sequencing of the human genome or the maintenance of the Large Hadron Collider.

Finally, there is an opportunity to entirely reinvent the field of public diplomacy in response to this crisis. Public diplomacy can move from a somewhat ambiguous effort by national governments to repackage their messaging to a serious forum for debate and action on international issues. As public diplomacy matures through the experience of Fukushima, we can devise new strategies for bringing together hundreds of thousands of people around the world to respond to mutual threats. Taking a clue from networked science, public diplomacy could serve as a platform for serious, long-term international collaboration on critical topics such as poverty, renewable energy, and pollution control.

Similarly, this crisis could serve as the impetus to make social networking do what it was supposed to do: help people combine their expertise to solve common problems. Social media could be used not as a means of exchanging photographs of lattes and overfed cats, but rather as an effective means of assessing the accuracy of information, exchanging opinions between experts, forming a general consensus, and enabling civil society to participate directly in governance. With the introduction into the social media platform of adequate peer review—such as that advocated by the Peer-to-Peer Foundation (P2P)—social media can play a central role in addressing the Fukushima crisis and responding to it. As a leader in the P2P movement, Michel Bauwens, suggests in an email, “peers are already converging in their use of knowledge around the world, even in manufacturing at the level of computers, cars, and heavy equipment.”

Here we may find the answer to the Fukushima conundrum: open the problem up to the whole world.

Making Fukushima a global project that seriously engages both experts and common citizens in the millions, or tens of millions, could give some hope to the world after two and a half years of lies, half-truths, and concerted efforts to avoid responsibility on the part of the Japanese government and international institutions. If concerned citizens in all countries were to pore through the data and offer their suggestions online, there could be a new level of transparency in the decision-making process and a flourishing of invaluable insights.

There is no reason why detailed information on radiation emissions and the state of the reactors should not be publicly available in enough detail to satisfy the curiosity of a trained nuclear engineer. If the question of what to do next comes down to the consensus of millions of concerned citizens engaged in trying to solve the problem, we will have a strong alternative to the secrecy that has dominated so far. Could our cooperation on the solution to Fukushima be an imperative to move beyond the existing barriers to our collective intelligence posed by national borders, corporate ownership, and intellectual property concerns?

A project to classify stars throughout the university has demonstrated that if tasks are carefully broken up, it is possible for laypeople to play a critical role in solving technical problems. In the case of Galaxy Zoo, anyone who is interested can qualify to go online and classify different kinds of stars situated in distant galaxies and enter the information into a database. It’s all part of a massive effort to expand our knowledge of the universe, which has been immensely successful and demonstrated that there are aspects of scientific analysis that does not require a Ph.D. In the case of Fukushima, if an ordinary person examines satellite photographs online every day, he or she can become more adept than a professor in identifying unusual flows carrying radioactive materials. There is a massive amount of information that requires analysis related to Fukushima, and at present most of it goes virtually unanalyzed.

An effective response to Fukushima needs to accommodate both general and specific perspectives. It will initially require a careful and sophisticated setting of priorities. We can then set up convergence groups that, aided by advanced computation and careful efforts at multidisciplinary integration, could respond to crises and challenges with great effectiveness. Convergence groups can also serve as a bridge between the expert and the layperson, encouraging a critical continuing education about science and society.

Responding to Fukushima is as much about educating ordinary people about science as it is about gathering together highly paid experts. It is useless for experts to come up with novel solutions if they cannot implement them. But implementation can only come about if the population as a whole has a deeper understanding of the issues. Large-scale networked science efforts that are inclusive will make sure that no segments of society are left out.

If the familiar players (NGOs, central governments, corporations, and financial institutions) are unable to address the unprecedented crises facing humanity, we must find ways to build social networks, not only as a means to come up with innovative concepts, but also to promote and implement the resulting solutions. That process includes pressuring institutions to act. We need to use true innovation to pave the way to an effective application of science and technology to the needs of civil society. There is no better place to start than the Internet and no better topic than the long-term response to the Fukushima disaster.

Emanuel Pastreich is the director of the Asia Institute in Seoul, where Layne Hartsell is a research fellow.