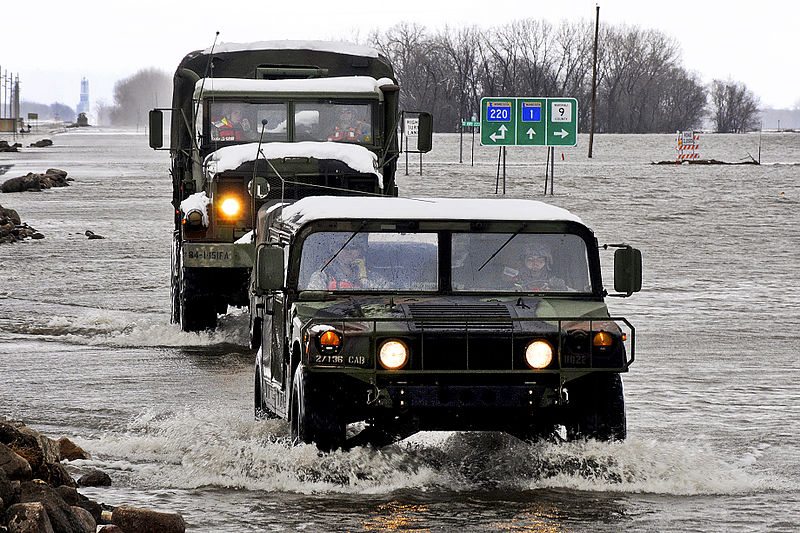 The Pentagon Comes Up Short on Climate

Good news: The Pentagon has a new report on the urgent challenge of global warming. Bad news: it's all about adapting to the coming changes rather than preventing them from happening.
By Eric Bonds | October 23, 2014

The Pentagon recently released a new report sounding the alarm on the national security threats posed by climate change. Like previous reports on the subject, this one makes clear that Department of Defense (DoD) planners believe that global warming will seriously challenge our nation’s military forces.

The report finds that, “rising global temperatures, changing precipitation patterns, climbing sea levels, and more extreme weather events will intensify the challenges of global instability, hunger, poverty, and conflict. They will likely lead to food and water shortages, pandemic disease, disputes over refugees and resources, and destruction by natural disasters in regions across the globe.” Such outcomes will mean, according to the report, that U.S. troops will be increasingly deployed overseas. The report also warns that many U.S. naval bases are vulnerable to flooding from sea-level rise and from more frequent and increasingly severe tropical storms.

At a time when climate denialism still exerts an influence over U.S. politics, it’s important that the DoD is raising awareness that global warming is real and is profoundly consequential. The Obama administration also seems to have timed the release of this report, which does not itself include much new information, to build broader domestic support for a new global climate treaty.

Nonetheless, the recent report also shows just how limited the Pentagon’s thinking is about the subject, and how militarism itself poses its own roadblocks to creating a more sustainable society that can exist within the bounds of our climate system.

The clear consensus among climate scientists is that accelerating global reductions in greenhouse gas emissions is the only way we can limit the severity of climate change. Yet amid all of its grave warnings about projected climate impacts on national security, the new DoD report leaves this point untouched. On the contrary, the Pentagon seems instead to be planning for, rather than working to avoid, a warming and more dangerous world.

The report, for instance, describes how the DoD is “beginning work to address a projected sea-level rise of 1.5 feet over the next 20 to 50 years” at the Norfolk naval base. It also states that the DoD is “considering the impacts of climate change in our war games and defense planning scenarios,” and that plans are being made to deal with diminishing Arctic sea ice, which will create new shipping lanes and open up new areas for resource extraction.

The Pentagon’s efforts to promote climate adaptation are understandable in the sense that some warming has been “locked in” to our atmosphere, and that no matter what we do now we will be feeling the impacts of climate change. But it’s also true that reports like this miss the larger point: the extent of global warming and the severity of its consequences has everything to do with whether or not we act now to aggressively cut emissions. But these cuts just aren’t possible right now without a massive public investment to create a low-carbon economy.

Although it might go by many different names—a Big Green Buy, a New Green Deal, or a Marshall Plan for the Environment—a serious plan to address global warming would require serious investments into creating more light rails, bullet trains, and bus systems while reorienting our communities to bicycles and walking. We will need to increase the energy efficiency of our homes and fund the creation of new power systems that do not rely on fossil fuels.

In her new book, Naomi Klein provides a number of possible sources of finance for these public investments—including the elimination of subsidies to fossil fuel companies, a carbon tax, small taxes on financial transactions, or a billionaire’s tax. Additionally, she argues that if the world’s ten biggest military spenders cut 25% of their defense budgets, it would free up an additional $325 billion to spend on green infrastructure every year.

Similarly, when Miriam Pemberton and Ellen Powell compared climate spending to military spending in the United States, they found that the nation puts only a tiny fraction of money—4% in comparison to the total DoD budget—into efforts that would cut carbon emissions. Just by eliminating unneeded and dangerous weapons systems, the U.S. government would have significant new sources of funding for green projects. For example, the U.S. government could change its plans to purchase four more littoral combat ships—which the DoD itself doesn’t want—in order to double the Department of Energy’s funding for energy efficiency and renewable energy efforts. Likewise, our government could continue paying for 11 aircraft carrier groups to patrol the globe until 2050, or it could retire two groups and put the savings into solar panels on 33 million American homes.

This sort of spending—and much more—is what will be required to meaningfully reduce carbon emissions. But the U.S. government currently has no such plans. When pressed, officials typically mention a lack of funding and the importance of “fiscal restraint” to explain why this need goes unmet. Meanwhile our resources continue to be invested in militarism rather than sustainability.

The Pentagon’s new climate change report, then, demonstrates just how severely limiting it is to speak of global warming as a “national security threat,” rather than thinking about it as a planetary emergency or in terms of environmental and intergenerational justice. Looking at climate change through a militarized lens of “national security” can only diminish our collective political imagination at the very time when we need all the innovation we can muster to meet one of the defining challenges of our time.

Eric Bonds is an assistant professor of sociology at the University of Mary Washington, in Fredericksburg, VA. He teaches and studies topics related to militarism, human rights, and the environment.