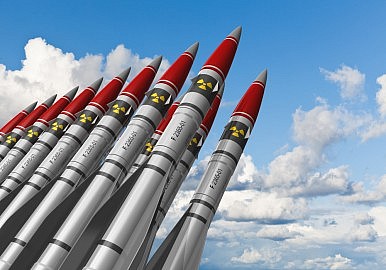 Since both Russia and china possess nuclear weapons, a future war could be on a scale never before experienced. (Photo: the Diplomat)

The Pentagon Plans for War on Many Fronts

It may not be long before there’s a military confrontation between the U.S. and what military officials call “a higher end threat,” presumably Russia or China.
By Rachelle Marshall | June 23, 2016

It is often said that nations typically defend themselves by preparing for the last war. That is what the Pentagon seemed to be doing a few weeks ago in the California desert near Twentynine Palms. The exercise called for one group of Marines to fire live ammunition in order to back up another group of Marines that was attempting to retake a city built to resemble the Iraqi towns of Falluja or Ramadi. When the general in charge was asked what language the participants were speaking, he said “Arabic.”

U.S. military commanders are at the same time training troops for war with Russia or China, or in the worst case scenario, both. The Pentagon says it is preparing for “hybrid wars” that will involve armies, guerrillas, and cyber threats. A large navy will be necessary as well. According to Admiral John M. Richardson, “When you look at this return of great power competition, one of the things that we have to pay more attention to, think harder about, is not only power projection, which is what we’ve been doing, but also sea control.”

What the Pentagon doesn’t say directly is that it is ready to use nuclear weapons. Unlike America’s wars in Afghanistan, Iraq, and Syria, the next confrontation may be with what military officials call “a higher end threat,” presumably Russia and/or China. Since both possess nuclear weapons, a future war could be on a scale never before experienced.

The Pentagon is said to regard as possible triggers the unpredictable Kim Jong-Un of North Korea, and China’s assertion of sovereignty over islands in the South China Sea that are claimed by the Philippines, Vietnam, Malaysia, and Taiwan. If a conflict breaks out between China and any one of those countries, America is likely to become involved.

An equally likely cause of armed confrontation, however, is Russia’s annexation of Crimea and Ukraine. Although both were once integral parts of the Soviet Union, the West viewed their takeover by Russia as unjustified aggression.

Unfortunately the days are over when Richard Nixon’s secretary of state, Henry Kissinger, and Soviet foreign minister Andrei Gromyko agreed to respect each nation’s sphere of influence. The U.S. accepted Soviet dominance over eastern Europe, and the Soviets stayed out of the Western hemisphere.

That arrangement dissolved during the presidency of Ronald Reagan, when the Soviet economy failed, and the system itself collapsed. The U.S. filled the resulting power vacuum by extending NATO’s reach into eastern Europe, so that today countries once in the Soviet Union’s orbit are home to American and Allied troops. NATO has plans to station four more battalions in the Baltic states and Poland, on the edge of Russia’s border. The Pentagon has already placed anti-missile weapons in several of those countries.

Not surprisingly, these actions draw protests from the Russians, who cite the 1997 NATO-Russia Founding Act under which NATO members agreed not to place troops and weapons on Russia’s borders. NATO defends its actions by saying the numbers of NATO troops and weapons in eastern Europe are too small to be in violation of the agreement.

NATO also claims the anti-missile weapons are defensive, although their major purpose is to protect the nation that deploys them from retaliation while it carries out an offensive. Children taking part in snowball fights used to hold garbage can lids in front of them while they bombarded the other side with snowballs. The lids were only technically defensive.

The risk of stationing NATO forces so close to Russia is that some accidental provocation could trigger an armed conflict. The fact that Donald Trump, who seems driven by the impulse of the moment, may be the next president means that no eventuality can be ruled out. Meanwhile, adding to the tensions are the sanctions imposed on Russia by the U.S. and the European Union as punishment for Russia’s annexation of Crimea and backing of anti-government rebels in Ukraine.

The EU recently extended for another year the sanctions limiting Russian access to capital markets, banning Russia’s arms trade, and preventing Russia from acquiring oil industry technology. Cruise ships from Europe will not stop at Crimean ports. Russia retaliated by banning food imports from Europe, an action that mainly hurts Italy and Greece, two agricultural exporters that can least afford the loss of a major market.

Putin used a Russian economic forum in mid-June to appeal to European investors who have shown interest in expanding their businesses to Russia. “Russia doesn’t need a new Cold War,” he told them. Unfortunately that message has not reached the White House or the Pentagon, both of which are moving to revive an arms competition with Russia.

This time the risk of a confrontation will be even more deadly. An op-ed column in the New York Times on June 18 by Senator Dianne Feinstein and Ellen Tauscher, President Obama’s former arms-control chief, warned that the Air Force was developing a new cruise missile that would carry a nuclear warhead and have the ability to penetrate the most advanced air-defense system.

Called the Long-Range Standoff Weapon, “it will provide the President with uniquely flexible options in an extreme crisis,” according to the Pentagon. The $30 billion project mainly gives the president the option to launch a nuclear device with immense destructive power. Sooner or later the Russians can be expected to develop a similar weapon. When that day comes, a nuclear arms race between the U.S. and Russia will once again become a reality.