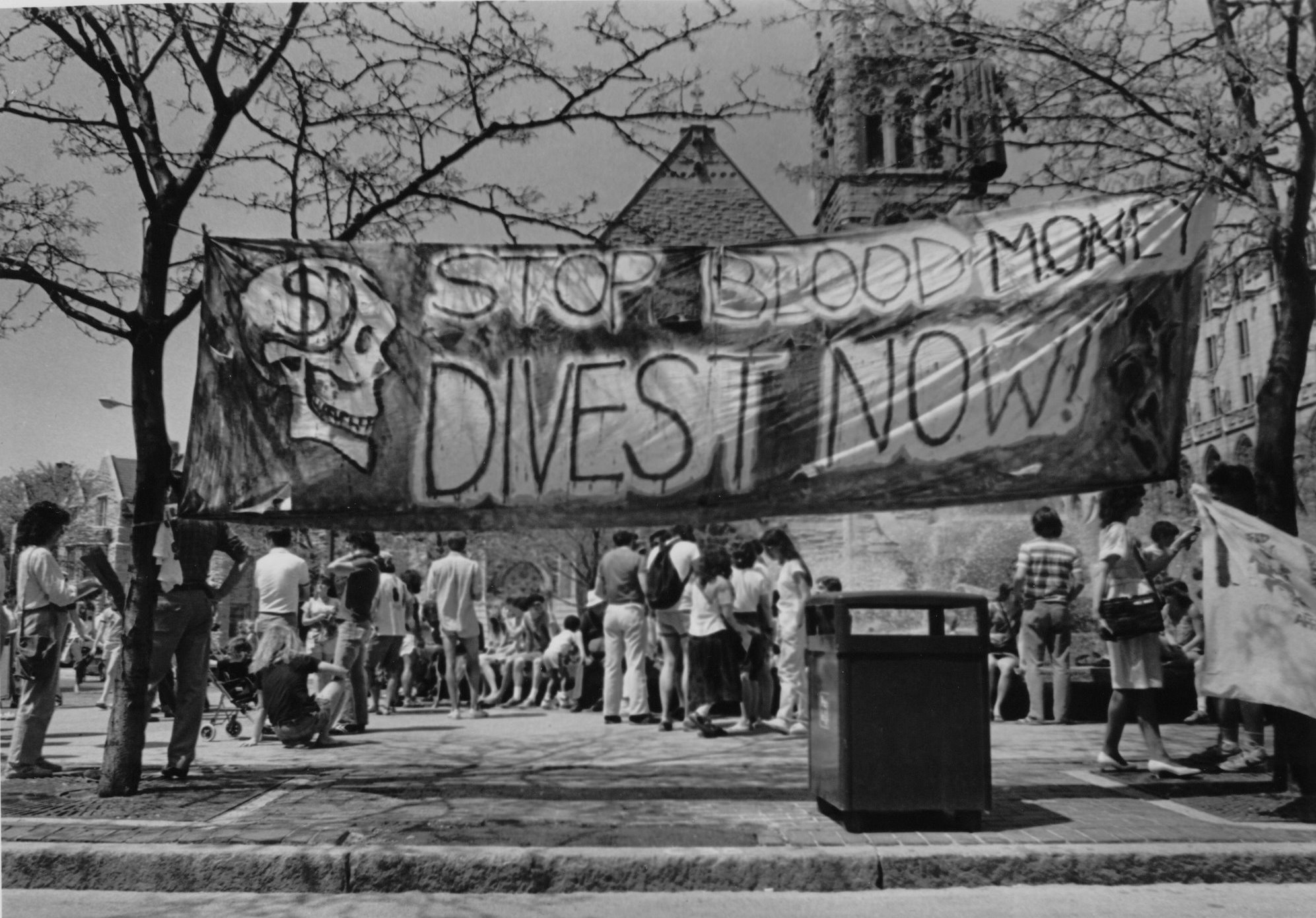 Inspired by anti-apartheid leaders like Nelson Mandela, the movement to sanction and divest from South Africa was driven by ordinary people of conscience. (Image credit: Syracuse Peace Council via the African Activist Archive)

How Nelson Mandela and ordinary citizens from all over the world strong-armed corporations, changed U.S. foreign policy, and ended apartheid in South Africa.
By Francis Njubi Nesbitt | December 6, 2013

A nation that is boycotted is a nation that is in sight of surrender. Apply this economic, peaceful, silent, deadly remedy and there will be no need for force.

Are economic sanctions an effective alternative to the use of force in international relations? Scholars are divided on the issue. Many have questioned Wilson’s judgment.

Yet the passing of Nelson Mandela brings to mind one grassroots campaign for economic sanctions that brought down a ruthless racial minority government: The campaign for sanctions against South Africa.

The anti-apartheid movement was one of the first grassroots campaigns to use economic sanctions to depose a government. It is a remarkable example of how a small group of activists helped change the course of history.

Citizens all over the world—from employees of transnational corporations and account-holders in major banks to consumers, cities, states, colleges, and universities—divested funds from companies that did business with South Africa. The goal was to cut apartheid South Africa off from the rest of the world.

By the 1980s, most of the world’s countries had imposed political, economic, and military sanctions on the South African regime. The exceptions were South Africa’s major trading partners: the United States and Britain. These countries disingenuously argued that sanctions would hurt black Africans most.

In the United States, however, a vigorous grassroots movement demanded that cities, states, pension funds, banks, and universities divest their resources from companies doing business in South Africa, making it a liability for anyone to do business in the racially segregated state. Eventually, international corporations pulled out in a massive exodus that helped to bring down the apartheid system.

This movement used nonviolent direct action tactics to pressure corporations, universities, and eventually Congress to impose sanctions on South Africa for its apartheid policies. It was launched on November 21, 1984, when four African-American leaders entered the South African embassy in Washington, DC and refused to leave until the South African regime dismantled apartheid and released all political prisoners.

After spending a night in jail, the four announced the formation of the Free South Africa Movement (FSAM) and began daily demonstrations outside the embassy. “Ours was an act of conscience in response to the repressive action of the South African government with respect to the noble, nonviolent protests of black South Africans over the last few months,” Fauntroy told reporters after the anti-apartheid activists were released on November 22.

Fauntroy said the FSAM would appeal to the conscience of grassroots Americans and move the struggle to “a new level.” He said this shift in strategy was necessary because efforts to persuade Congress to impose sanctions had failed. He called for demonstrations to be held daily outside the embassy and at South African consulates throughout the country.

“It could have been a scene from the civil rights movement of the 1960s,” Time magazine added: “a large crowd of demonstrators, most of them black, marching in peaceful protest down an avenue in Washington, chanting slogans and carrying signs. But the series of rallies that have been taking place on Embassy Row during the past two weeks are against racism in another country; the apartheid government of South Africa.”

In 1985, Citibank announced that it would no longer provide South Africa with loans. Later that year, Chase Manhattan refused to roll over short-term credit and demanded that South Africa repay its debts in full. Other banks followed suit. These financial sanctions had a devastating effect on South Africa’s economy. But activists still needed Congress to impose comprehensive sanctions.

The movement was finally vindicated in October 1986, when Congress passed the Comprehensive Anti-apartheid Act over President Reagan’s veto. The Act was a major success for the Congressional Black Caucus, the Free South Africa Movement, TransAfrica, and other organizations and activists who had worked for decades to get Congress to pass a sanctions bill.

In 1988, Congress strengthened sanctions against South Africa, banning all trade, investment, and bank loans. It prohibited intelligence and military cooperation between Washington and Cape Town, cut air links, banned all exports and imports, and prohibited U.S. ships from carrying oil destined for the country, leading almost immediately to a 50-percent drop in trade with South Africa. The European Parliament followed suit soon after.

These sanctions meant total isolation for the apartheid regime. Within months, the country’s economy was on the verge of collapse. It was clear that it could not survive without sustaining its trade and financial ties to the West. Liberals and business leaders in the country demanded reforms.

The crisis forced South African President F.W. de Klerk to the negotiating table. On February 11, 1990, he announced the release of Nelson Mandela and other political prisoners. The pressure continued to come from the left and right, eventually forcing de Klerk to announce multiracial elections in 1994.

Nelson Mandela was sworn in as president in April 1994 after South Africa’s first free election. He formed a National Unity government that included de Klerk as one of the deputy presidents. Mandela also convened the Truth and Reconciliation Commission (TRC) to investigate and report on crimes committed by the state and other groups between 1948 and 1994. The TRC held its first hearings in 1996.

The greatest accomplishment of the Government of National Unity was the adoption of a new constitution in 1996. The constitution included a bill of rights that guaranteed equality and prohibited the state from discriminating against individuals for any reason, including race, sex, gender, or racial and ethnic origin. It prohibited such apartheid-era abuses as detention without trial, torture, and the limitation of movement.

Despite the political demise of apartheid, its effects are still evident in the economic sphere. Nearly two decades later, South Africa’s white minority still owns over 80 percent of agricultural land and remains in control of the economy. Recent reports indicate that racial inequality has actually grown since 1994. The ANC’s neo-liberal policies have not redistributed resources or reduced poverty to any significant degree.

But the challenges that remain are precisely what make the lessons learned so far valuable. The successful use of sanctions to bring down the apartheid regime is one of the more obscure lessons of the anti-apartheid movement led by Nelson Mandela, but it was an early and integral part of it: The liberation movement called for international sanctions as early as 1952, and the ANC in exile led the sanctions movement around the world.

This was a remarkable movement that mobilized millions of ordinary people to express their opposition to apartheid by withdrawing their support from companies that insisted on doing business with South Africa. This people’s movement eventually forced these corporations to withdraw from South Africa and even changed U.S. foreign policy, a remarkable feat by any measure. This is a lesson that contemporary social movements would do well to study and emulate.

Francis Njubi Nesbitt
Foreign Policy in Focus contributor Francis Njubi Nesbitt is a professor of Africana Studies at San Diego State University. He is the author of Race for Sanctions and has published numerous book chapters and articles in academic journals.