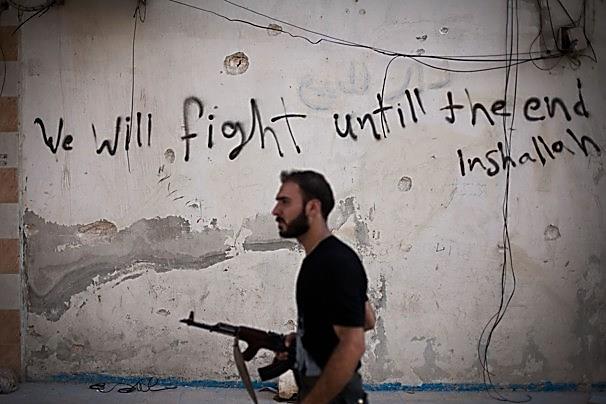 The Obama administration's strategy includes arming the opposition forces just enough to keep them fighting Assad, but not enough for them to overthrow the government.
By Edward Hunt | September 13, 2016

With no end in sight for the war in Syria, the Obama administration continues to approach the conflict in a way that is prolonging the fighting. As it pursues its stated goal of removing the Syrian dictator Bashar al-Assad from power, the Obama administration is implementing a policy that keeps the Syrian regime and the many different opposition forces in the country locked in a deadly stalemate.

On September 9, 2016, Secretary of State John Kerry provided the standard explanation when he introduced a new plan to slow parts of the war between the Syrian government and the so-called “legitimate” opposition forces, while creating a new avenue for the United States and Russia to begin coordinating airstrikes against other militants. Hopefully, the new plan will “reduce violence, ease suffering, and resume movement towards a negotiated peace and a political transition in Syria,” Kerry stated.

In the weeks leading up to Kerry’s announcement, additional officials expressed similar aspirations. For example, Pentagon Press Secretary Peter Cook said on August 22, 2016 that the Obama administration intends “to resolve the situation in Syria peacefully, to get a political resolution to something that cannot be solved militarily.”

At the same time, administration officials have indicated that they are pursuing additional aims for the country. While they always insist that they are working to achieve peace, they have acknowledged that, first, they intend to fulfill certain conditions.

In July 2015, Secretary of Defense Ashton Carter disclosed one of those conditions when he informed the Senate Committee on Armed Services that the Obama administration needed to ensure that the Syrian state survived the war. “Obviously, what we would like to see occur is for Assad to leave the scene, but for the state of Syria not to disintegrate completely because we know what is down that road: sectarian disintegration,” Carter stated. Ultimately, he said, “Assad needs to go, but the structures of governance need to stay or we hope they will stay because we know what life is like without structures of governance in the Middle East.”

More recently, CIA Director John Brennan has provided more insight into the administration’s strategy. Addressing the fact that the administration has continued to support a number of opposition groups that are fighting to overthrow the Syrian government, Brennan explained that the administration only provides the opposition groups with just enough resources to keep them fighting. “I think what we’re trying to do is to make sure the moderate opposition continues to stay strong, puts the pressure on the regime,” Brennan explained. “We don’t want the Syrian government to collapse,” he added. “That’s the last thing we want to do.”

With its approach, the Obama administration has applied a policy to Syria that has prolonged the war. In fact, some administration officials insist that a prolonged war works to their advantage. Despite the fact that the years of fighting have only succeeded in producing more death and suffering for the Syrian people, with the war now claiming somewhere between a quarter million and a half million lives, a number of officials contend that indefinite fighting provides the United States with strategic benefits.

In June 2013, the White House Chief of Staff Denis McDonough described some of the benefits when he privately informed a number of Congressional officials that stalemate kept a number of U.S. enemies consumed by the war. As the New York Times reported, “Mr. McDonough argued that the status quo in Syria could keep Iran pinned down for years.” In other words, McDonough believed that stalemate would require the Iranian government to expend much of its time and resources in a long-term effort to prop up the Syrian regime. “In later discussions, he also suggested that a fight in Syria between Hezbollah and Al Qaeda would work to America’s advantage,” the New York Times disclosed.

Administration officials who advocated a policy of stalemate also received significant backing for their position. As the Obama administration continued to review its approach to the war, a number of individuals and governments declared their support for stalemate.

Notably, strategist and government consultant Edward N. Luttwak proclaimed in August 2013 that stalemate was the best option for the United States. “Maintaining a stalemate should be America’s objective,” Luttwak insisted. Confident that a perpetual war between the Syrian government and the opposition forces in the country would weaken numerous U.S. enemies, Luttwak urged the Obama administration to perpetuate the fighting. “And the only possible method for achieving this is to arm the rebels when it seems that Mr. Assad’s forces are ascendant and to stop supplying the rebels if they actually seem to be winning,” he advised.

Taking a similar position, the Israeli government also signaled its support for stalemate. “For Jerusalem, the status quo, horrific as it may be from a humanitarian perspective, seems preferable to either a victory by Mr. Assad’s government and his Iranian backers or a strengthening of rebel groups, increasingly dominated by Sunni jihadis,” the New York Times reported in September 2013.

In fact, the Obama administration decided to implement a comparable strategy. Even if administration officials never openly admitted to adopting a policy of stalemate, they recognized that their decision to provide the Syrian opposition with just enough support to keep fighting the Syrian regime would ensure that the war continued.

As long as Assad remains in power, “I would foresee kind of more of the same, sort of a perpetual state of stalemate, where neither the regime nor the opposition can prevail,” Director of National Intelligence James Clapper acknowledged before the House Permanent Select Committee on Intelligence in February 2014.

Consequently, the Obama administration felt little serious pressure to change its approach. Administration officials knew that they could employ their military power to place more pressure on Assad, but they felt that they had already found a better formula for achieving their objectives in the country — continue providing the country’s opposition forces with just enough assistance to sustain the fight against Assad.

Truthfully, “we do provide some measure of support to some opposition groups inside Syria, and that support continues today,” State Department Spokesperson John Kirby confirmed on August 18, 2016.

By continuing to provide some measure of support to some opposition groups inside Syria, the Obama administration is also playing a central role in prolonging the fighting. While it may continue to insist that it is doing everything that is required to achieve peace, as Secretary of State Kerry suggested when he announced his latest peace plan, the administration is entering its final months in office knowing that it is fueling a deadly stalemate.

As Kerry noted, “The current trend is simply creating more terrorists, more extremists, and destroying the country in the process.”