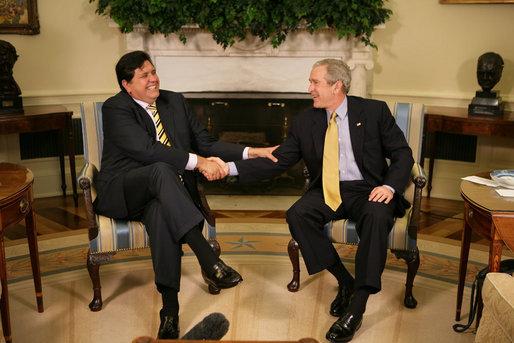 Democrats and civil society groups won important concessions on the free trade agreement with Peru. But politicians in both countries have undermined those gains.
By Tereza Coraggio | February 7, 2011 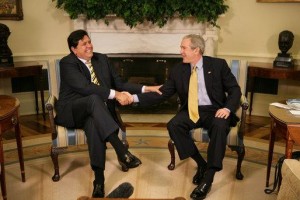 In 2007, a determined Democratic caucus put their collective feet down. They refused to consider any more free trade agreements without a new model, with stronger protections for labor, human rights, and the environment. And so in May, the caucus and its supporters cut a deal with the Bush administration for a new and improved FTA with Peru.

For their part, the AFL-CIO and other unions agreed to not oppose it, effectively blocking the coalitions to which they belonged. Environmental groups promised their neutrality in exchange for an agreement not to log old growth forests. Churches and human rights organizations said they wouldn’t rally their members if progress were shown on reducing abuses before the FTA was implemented. And so, proponents of the FTA bargained with leaders of the major issues and came up with win-wins. After flexing their collective power for these concessions, each alliance told their member organizations to stand down.

When the Finance Committee reviewed the draft, however, Sen. Jeff Bingaman (D-NM) noticed a flaw. There was no funding for independent oversight. He proposed $30 million over five years to monitor whether export factories were complying with the labor laws. But he was ruled out of order by Committee Chair Max Baucus (D-MT) because, under the “fast track” process, no change can be made unless necessary to implement the FTA. No funding was therefore approved, nor any agency to which workers or communities could appeal.

In Chapter 10 of the agreement, though, there were 46 pages of investor protections. These included reparations owed by Peru’s taxpayers if new labor or environmental laws threatened the investors’ expected profits. The International Centre for Settlement of Investment Disputes was designated as the court of jurisdiction. Out of hundreds of cases filed by corporations against countries, only one case has ever been filed by a country against a corporation.

It has been two years since the U.S.-Peru FTA was implemented, after ratification by both the U.S. and Peruvian congresses. In its two-year review of the agreement, Public Citizen shows that corporations have already begun to take advantage of the provisions. Renco, owner of Doe Run Resources in La Oroya, the second largest lead producer in the world, is suing Peru for $800 million plus liability for a pending U.S. lawsuit on behalf of 35 lead-poisoned Peruvian children. La Oroya is one of the 10 most polluted places on the earth, equal to Chernobyl and more severe than Bhopal. But Renco, which bought Doe Run in 1997, alleges that Peru low-balled the clean-up cost, hasn’t done its part, and is shirking its agreement to assume liability.

Peru also missed its August 1 FTA deadline to reduce illegal logging through forest sector governance. However, indigenous groups oppose the proposed law regulating access to the forests, saying it would open even more of the Amazon for oil and gas exploration, which has risen from 10 percent to 70 percent since trade negotiations started.

In Peru a year ago, things had been looking up. The conservative, pro-U.S. candidate had been soundly defeated in the election, leaving a run-off between former president Alan Garcia and a nationalist who favored domestic trade over foreign investment. To attract bipartisan votes, Garcia promised to reinstate labor rights taken away in the 1990s under free market policies and to revamp the FTA to protect labor and natural resources. He would invest in infrastructure for the Sierra highlands and the eastern Amazon basin, two of the poorest regions, which overwhelmingly supported the nationalist candidate. Privatizations would be reversed, and a Constituent Assembly convened. Wealth would be distributed to improve the living standards of all Peruvians. Through these election promises Garcia’s “party of the people” won, but still by a slim margin.

Within his first month in office, however, Garcia repudiated his campaign promise to rewrite the FTA and made its signing by Congress his first priority. He named pro-U.S. businessmen to his cabinet. He introduced economic austerity to the regions that had opposed him, to attract foreign capital and to promote “development.” Within the year, his approval rating dropped and unrest soared, to which he responded by militarizing major ports, airports, and power stations.

In July, a million Peruvians participated in marches and strikes in a nationwide mass protest against the FTA involving teachers, miners, agro-export workers, textile and industrial workers, students, and small merchants. Ten days later President Garcia passed 11 Executive Decrees giving immunity to any police or military who caused death in the line of duty. He also established 20-years of imprisonment for teachers who encouraged minors to belong to “gangs” or to anyone who collaborated with “terrorism.” This could be interpreted to include peaceful protest and “information terrorists” like economist Pedro Francke and agro-ecologist David Bayer. Civil society organizations sent a joint statement of objections to the U.S. Congress, but it never entered into the debate.

While the FTA was being considered, a devastating earthquake hit Peru’s Ica Valley. In a U.S. blog called “Truth About Trade & Technology,” Iowa farmer Dean Kleckner seized on the opportunity to push the deal, writing, “Give a man a fish and he will eat for a day. Teach a man to fish and he will eat for a lifetime. It’s appropriate to give them all the fish they can eat now, but rather than give them handouts once they’re back on their feet, we should provide them with economic opportunities.”

But Kleckner may have been fishing for himself, since the Iowa Kleckners had received over $1 million dollars in farm subsidies over the last ten years. Since 1995, the US has given $75 billion to subsidize GMO corn, Iowa’s major crop, for which Peru was one of the top 20 importers in 2007, up 60 percent from 2006.

So who does benefit from Free Trade Agreements? An NGO called GRADE did a regional analysis that predicted the FTA would increase revenue by $575 million for city-dwellers but take $158 million away from poor rural populations. The Sierra highlands, with the most extreme poverty, would lose $100 million, while Metropolitan Lima, where the wealthiest live, would gain $350 million. The FTA brings money into Peru but makes the rich richer at the expense of the poor. Products and agriculture flow out of indigenous communities while the profits flow to wealthy business owners. The loss of land exacerbates rural-to-urban migration, overburdening population centers with greater unemployment. Exporting food 4000 miles in order to import food from 4000 miles increases vulnerability to a global food crisis.

In the end, transnational corporations are the big winners. As the Network for Global Justice in Investment writes, “nations have been sued for seeking to safeguard their people’s health, to control their water and other resources, and to reshape their economies in the public’s interest. Foreign investors have been able to win hundreds of millions of dollars in damages in legal playing fields tilted heavily to their advantage.”

Now that William Daley, JP Morgan executive and architect of NAFTA during the Clinton administration, is Obama’s chief of staff, FTAs with Korea and Colombia will be on the table. Lessons from Peru show that labor and environmental provisions are meaningless unless backed by political will on both sides. According to an analysis of the Peru FTA by the Council on Hemispheric Affairs, 70 percent of Peru’s labor force are contract workers, or “eternal temporaries,” not covered by minimum wage or labor laws. With this loophole FTA labor standards are irrelevant. On the environmental side, Garcia’s decrees have removed barriers to logging. But even if forestry protection is enforced, it will be at the expense of indigenous communities who’ve already lost the right to negotiate with mining and energy companies.

Before any new trade deals are introduced, Peru should be revisited. Two years is long enough to determine if the “New Trade Policy for America,” introduced by the Democrats in 2007 to incorporate labor and environmental standards into FTAs, is more of the same old, same old.

Tereza CoraggioForeign Policy In Focus contributor Tereza Coraggio is author and host of the radio show Third Paradigm at thirdparadigm.org.