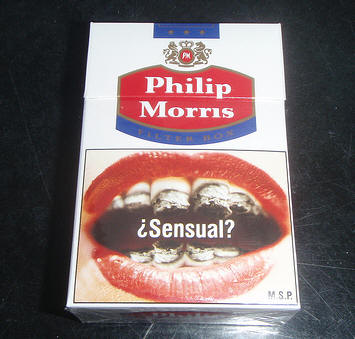 The tobacco giant Philip Morris is going up against a new anti-smoking law, this time over intellectual property rights.
By Juan Antonio Montecino, Rebecca Dreyfus | March 4, 2010 Uruguay’s new legislation, submitted in June 2009 and expected to go into effect in March 2010, requires that 80 percent of each side of cigarette boxes be covered by graphic images of the possible detrimental health effects of smoking. The company argues that the law limits the space for branding and thus infringes on its intellectual property rights.

These requirements are nothing new in Uruguay or elsewhere the world. Before this law, Uruguay had legislation that required 50 percent of each side of the box contain health warnings. Although health-warning laws in other countries vary, they have been around for many years. Brazil, for example, requires that 100 percent of one side of cigarette boxes feature health warnings, while in Australia the measures go even further, requiring a warning on 30 percent of the front and 90 percent of the back.

Uruguay is not the first, second, third, fourth, or even the fifth country to implement these laws. There is a wide array of support for such laws throughout the world, from neighboring countries like Chile and Argentina to distant lands like Australia and Canada. But Philip Morris has not launched a lawsuit like this one before.

Ironically, the U.S.-based Philip Morris is filing its claim under a bilateral investment treaty between Uruguay and Switzerland, even though that European country became the most recent nation to adopt strict cigarette packaging rules on January 1, 2010.

Philip Morris has its headquarters in New York but its operations center in Lausanne, Switzerland. The firm is famous for Marlboros (the world’s top-selling cigarette) and controls around 15 percent of the international cigarette market outside the United States.

This case echoes many others currently underway in developing regions, where powerful corporations from the developed north seek to take advantage of “investor protections,” under trade agreements and bilateral investment treaties, to ensure profits at any cost. Such claims are decided by international arbitration tribunals that cannot force a country to repeal its laws but can award massive compensation to the foreign investor.

Philip Morris’s lawsuit is a logical step in the tobacco industry’s aggressive push toward new markets, at a time when traditional markets in the developed world are drying up. The World Health Organization reported that “smoking is on the rise in the developing world but falling in developed nations. Among Americans, smoking rates shrunk by nearly half in three decades (from the mid-1960s to the mid-1990s), falling to 23 percent of adults by 1997. In the developing world, tobacco consumption is rising by 3.4 percent per year.”

According to Philip Morris’ latest annual report, profits from emerging markets grew 17 percent between 2007 and 2008, and now, at $33 billion, surpass profits from the European Union. Also, Philip Morris’ profits have grown the most in Latin America and Canada, by a hefty 23 percent.

There are many arguments in favor of discouraging smoking in the name of the public interest. Smoking has large social costs, both through smoking-related health care spending and negative effects on worker productivity. Smoking-related illnesses disproportionately impact the poor, who have less access to health care and for whom tobacco consumption represents a much larger portion of household income.

Tabaré Vázquez, a trained medical doctor whose term as the country’s president ended March 1, promoted Uruguay’s anti-smoking laws. Uruguay’s new center-left president, Pepe Mujica, comes from Vázquez’s own party and will likely support the anti-smoking law. On the campaign trail and in declarations since his election, Mujica has stressed that a continuation of his predecessor’s policies will figure prominently in his agenda.

All nations should be allowed to implement legislation they believe protects their population’s health — without having to face expensive lawsuits from global corporations. Philip Morris’s suit is just the latest in the tobacco industry’s long history of abuse of power.

Juan Antonio Montecino, Rebecca DreyfusRebecca Dreyfus is a research assistant with the Institute for Policy Studies and a contributor to www.justinvestment.org, a website jointly operated by IPS and the Bolivia-based Democracy Center. Juan Antonio Montecino is a research assistant at the Center for Economic Policy and Research in Washington D.C. working on Latin American economic development. Both are contributors to Foreign Policy In Focus.