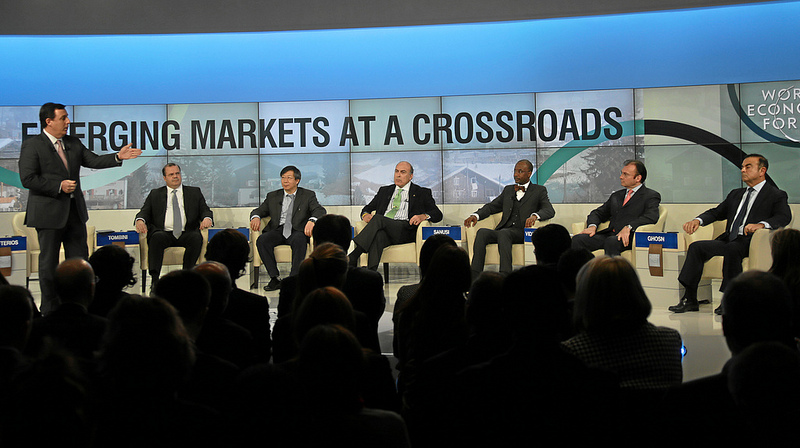 The prospect of prolonged global stagnation has been deeply troubling and hard to accept for partisans of globalization--hence the endless hyping of "emerging markets." (Photo: World Economic Forum / Flickr)

Searching for growth opportunities in a world still beset by financial crisis, multinational corporations and globalists are hyping all kinds of "emerging markets."
By Walden Bello | May 16, 2014

Rarely have countries’ reputations turned around so dramatically. Once disparaged as a “narco-state,” Mexico is now considered an investment “favorite.” And the Philippines, previously denounced as the “sick man of Asia,” now receives praise as a “bright spot” in the continent.

Are these accurate descriptions of the countries’ changing fortunes? Or might they reflect corporate fantasies about the global economy—providing rays of hope for investors as the economic crisis stubbornly lingers on?

From Apparent Rags to Supposed Riches

In at least two major international publications—if not in its own national press—the Philippines under President Benigno Aquino III’s leadership has been the toast of the town.

In his much-read New York Times piece this past February, Keith Bradsher touted Aquino’s campaign against corruption. “Political analysts say that his administration has fought and reduced the corruption that played a role in holding the Philippines back,” he wrote. “In one practical measure of that change, the country has been able to pave more roads per 100 million pesos in spending (about $2.2 million) than before—when funds were lost to corrupt officials and incompetence—finally addressing an impediment to commerce.” Perhaps the tide had turned.

At around the same time, Karen Brooks, writing in Foreign Affairs, claimed that it is no longer Indonesia but the Philippines, “the region’s other archipelago, that is now providing the biggest upside surprise.” The evidence? “The Philippine economy expanded by 6.6 percent in 2012, exceeding most economists’ predictions, and was among the fastest-growing economies in the world in the first half of 2013, expanding by 7.6 percent.” Moreover, “The Philippine Stock Exchange Index has posted record highs since President Benigno Aquino III came into office in 2010, and approvals for foreign investment have more than doubled in that period. The country’s inflation is low, its foreign exchange reserves are high, and its public debt is steadily declining. As a result, all three of the major credit-rating agencies upgraded Philippine sovereign debt to investment grade in 2013: the first such rating in the country’s history.”

These articles don’t entirely lack criticism—they do cite continuing problems of poverty and inequality. But for the most part their upbeat tone provides a striking counterbalance to the critical opinions rife in the Philippines’ local media.

And to be sure, much of the praise is well deserved. Particularly noteworthy are the president’s crusade in favor of the much-needed Reproductive Health Law, his leadership on the anti-corruption front, and the country’s enviable political stability, due in no small part to Aquino’s own seemingly unassailable popularity.

But one wonders if there might also be something else going on.

This suspicion especially resonates when one notes the strikingly similar assessments currently being made of Mexico—a country that had previously been written off as a hopeless “narco-state.” In the February 24 issue of Time, Michael Crowley captured a growing sense of optimism. “Now the alarms are being replaced with applause,” he wrote. “After one year in office, [President Enrique] Peña Nieto has passed the most ambitious package of social, political, and economic reforms in memory. Global economic forces, too, have shifted in his country’s direction. Throw in the opening of Mexico’s oil reserves to foreign investment for the first time in 75 years, and smart money has begun to bet on peso power.”

That assessment is shared by investors, as Crowley notes by quoting one of their experts. “‘In the Wall Street investment community, I’d say that Mexico is by far the favorite nation just now,’ says Ruchir Sharma, head of emerging markets at Morgan Stanley. ‘It’s gone from a country people had sort of given up on to becoming the favorite.’”

These glowing reviews of two economies previously regarded as close to moribund lead one to ask if the judgment of the international business press is based not only on what is actually going on in these countries, but also on what is happening more broadly in the global economy.

To understand that, it’s helpful to view international trends. As we already know, over the last six years, the global economy has been in crisis. That crisis has played out in three phases.

In the first phase, 2008 to 2010, Wall Street’s financial implosion dragged the U.S. economy into a deep recession that saw unemployment climb to nearly 10 percent. The economic problems have continued, and over the last three years, predictions of sustained recovery have been continually dashed. Consumers have preferred to save rather than spend, in order to dig themselves out of the massive debt they had accumulated in the years when their unrestricted consumption served as the engine of the world economy.

The second phase, the so-called sovereign debt crisis of the European economies, began in earnest early in 2010. Panicking at the huge loans they had made to businesses and governments in Southern and Eastern Europe, international banks refused to lend more money until they had been repaid. The ensuing austerity programs—implemented not only in highly indebted countries like Ireland and Greece but also in troubled Western European economies like Britain and France—practically eliminated Europe as a motor for global recovery.

During this second phase, many hoped that the so-called BRICS—the acronym for Brazil, Russia, India, China, and South Africa—would fill the void vacated by Europe and the United States. Although these economies had stumbled as a result of the 2008-2009 Wall Street implosion, they appeared to have recovered their momentum by 2010, in some cases thanks to massive stimulus spending. For example, China’s $585-billion stimulus program, the world’s biggest in relation to the size of the economy, shored up fellow BRICS and many developing economies by increasing China’s demand for minerals, raw materials, and manufacturing inputs.

Noble Prize laureate Michael Spence became the most prominent voice for those who saw BRICS as saviors of globalization. “The major developing economies have displayed remarkable resilience in the crisis and its aftermath,” he wrote in his 2011 book The Next Convergence. “Growth is returning and is already approaching pre-crisis levels in Asia (East and South) and in Latin America, the latter helped in no small measure by the tailwind provided by Asian growth…. This growth is sustainable even in the event of slow medium-term growth in the developed countries. The reason is that the size of the emerging market economies taken together is large and growing.”

Spence saw this vibrancy as having world-wide repercussions. “The persistence of growth in the emerging markets is a major positive for the global economy in terms of overall growth and because of the positive impact it will have on the smaller, poorer developing countries. In addition, it will lubricate the structural adjustments in the advanced economies,” he wrote.

Spence’s book had barely hit the bookstore shelves in 2012 when the BRICS countries began to falter, heralding in the third phase of the global economic crisis. During that time, the growth rate of lead economy China dropped from 11 to 7 percent. Even more drastic plunges took place among China’s BRICS partners. This year, Brazil is expected to grow at a mere 1.6 percent, making 2014 the fourth straight year of very low growth.

At the heart of this problem was the fact that most BRICS countries had not been able to wean themselves from their dependence on the U.S. and European markets for their exports. Chinese technocrat Yu Yong Ding summed up the dimensions of the decline when he said that China’s “growth pattern has now almost exhausted its potential.”

The Rise of Corporate Fantasies

For international business, media, and academic establishments that have been socialized into assuming that globalization is positive and irreversible — with crises considered but bumps on the road to global prosperity — the prospect of prolonged global stagnation has been deeply troubling and hard to accept.

So it’s very appealing to search for new “emerging markets.”

In this context, economies that would have merely merited a nod at other periods have become “hot” economies. For finance capital seeking a place to dump and speculate on its massive surpluses, such economies are possible investment havens. For technocrats, academics, and the institutional apparatuses of corporate-driven globalization such as the World Bank and Word Trade Organization, these economies could be the new drivers of growth that lift the global economy out of its six long years of stagnation and crisis.

Around two years ago, when it became clear the BRICS could not be relied on to sustain global growth, investors coined the term CIVETS (Colombia, Indonesia, Vietnam, Egypt, Turkey, and South Africa) to denote what they saw as a dynamic new grouping. Since then, Egypt and Turkey have fallen off the list owing to political instability. Meanwhile, Indonesia and Vietnam have garnered less enthusiasm — due to increasing nationalism and infrastructure bottlenecks in Indonesia, and rising wages and a real estate bubble in Vietnam.

Mexico and the Philippines, however, are expected to inject new dynamism into the grouping.

Facing Up to Harsh Realities

But how realistic are the expectations for Mexico and the Philippines set forth by finance capital, which routinely alternates between depression and euphoria, and functions with an extremely short time horizon? Is there something solid beyond the countries’ impressive growth rates?

First, it’s helpful to note the commonalities. While having some distinctive problems, the most obvious being Mexico’s drug cartels, the two countries have similar structural obstacles to sustained growth.

Both countries have had their manufacturing sectors severely damaged by structural adjustment policies and the flight of capital to low-wage economies. Both also have agricultural sectors that have been devastated by trade liberalization—the Philippines’ by the World Trade Organization’s Agreement on Agriculture, and Mexico’s by the North American Free Trade Agreement (NAFTA)—while agrarian reform has stalled in the Philippines and is being reversed in Mexico. Moreover, rent-seeking groups dominate both economies, with strategic sectors cornered by a few individuals—like Carlos Slim, the Mexican telecommunications mogul who was the world’s richest man in 2012, and Manny Pangilinan, the aggressive conglomerate builder who has brought the Philippines’ telecommunications and energy sectors under the control of Indonesia’s Salim family.

What emerge from these harsh realities are countries with severe poverty and inequality. Forty-two percent of the population lives below the poverty line in Mexico, and close to 20 percent does so in the Philippines. Both will surely flunk the prime Millennium Development Goal (MDG) test of halving the percentage of their populations living in poverty by 2015. In terms of inequality, both have terrible profiles, with the Gini coefficient—the best measure of income inequality—standing at a troubling 48.2 in Mexico and 43 in the Philippines. With domestic purchasing power gaining increased importance, especially given the dwindling export markets of the North and the BRICS amid prolonged global stagnation, these numbers by no means indicate a capacity to build and sustain a dynamic internal market, much less to catalyze a global recovery.

So has Mexico earned its status as a “favorite,” and should the Philippines be considered a bright spot?

Undoubtedly, President Aquino and President Peña Nieto have made some advances in turning around their countries’ economies. But the Philippines and Mexico have a long way to go before they can qualify as “hot new emerging markets.” The aura that surrounds them at present reflects less the realities of their economies than the desperate fantasies of international finance capital and the partisans of a failed globalization.