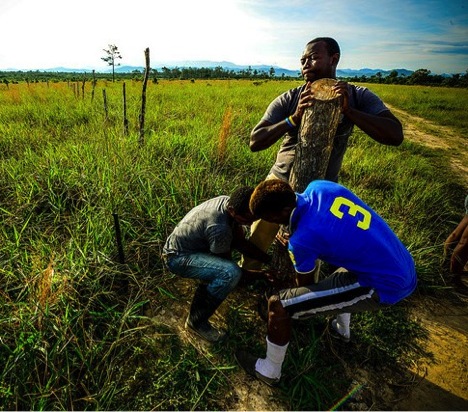 Garifuna youth brigade members remove a fence post in the area planted by narco invaders of the land prior to 2012 land recovery. (Photo: Steve Pavey)

Photos: The Indigenous Fight for Lands and Cultural Survival in Honduras

The Garifuna, an Afro-indigenous community in Honduras, are standing up to government repression, corporate land grabs, and narco violence.
By Beverly Bell, Stephen Bartlett | December 16, 2014

Honduras is the country with the highest level of homicide of any nation not at war, where government violence and human rights abuses occur with almost total impunity. It is also the country contributing most to the flood of children who have been recently forced to migrate to the United States by violence and poverty — both, in part, a legacy of U.S. policy in the region.

Yet something else is afoot. A fierce social movement, composed of many sectors, is pushing back to protect democracy, lives, and political rights. Indigenous peoples — including the Garifuna, Lenca, Pech, Miskito, Maya Chortí, and Tolupan — are also asserting their human right to autonomy, territory, and cultural survival.

The Afro-Indigenous Garifuna people are organized through the National Fraternal Black Organization of Honduras, or OFRANEH by its Spanish acronym.

OFRANEH is at the forefront of an effort to protect Garifuna territory against theft by multinational corporations, the state, and the oligarchy — theft that the United States enables through strong political support for the Honduran government and funding for its brutal military and police. OFRANEH aims to defend the Garigunas’ ecologically rich lands, rivers, forests, oceanfront, and other pillars of their identity: autonomy, community solidarity, and indigenous knowledge. 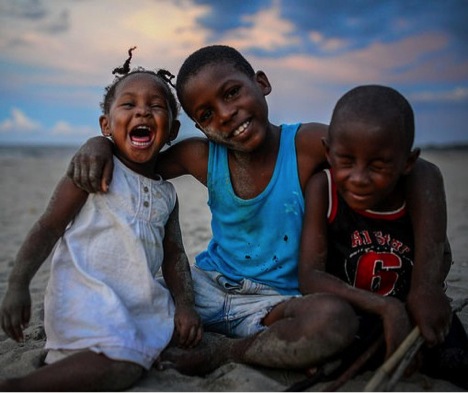 What’s at stake for Honduras’ Garifuna people: Human rights, culture, and land. As throughout much ancestral territory, those who live on this beachfront in Triunfo de la Cruz are targeted for expropriation by a tourism corporation. (photo: Steve Pavey)

“Our lands and identities are critical to our lives,” said OFRANEH coordinator Miriam Miranda. “For us, the struggle for our territories and our commons and our natural resources is of primary importance to preserve ourselves as a people.”

Garifuna lands are being grabbed — with government approval — for tourism, a naval base, a deep-water port, and for gas and oil extraction. This is a gross violation of Convention 169 of the International Labor Organization, the UN Declaration on the Rights of Indigenous Peoples, and Honduras’ own constitution, which all guarantee free, prior, and informed consent to any projects in indigenous territories. Narco-traffickers have seized additional lands.

A major element of OFRANEH’s organizing and advocacy is to recover and consolidate the 2,500 acres of their territory of Vallecito on the north coast. They hope to use it as a base for Afro-indigenous resurgence. 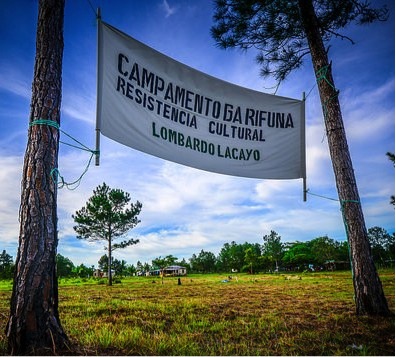 Vallecito: Lands Recovered from narco-traffickers in 2012 lie in the heart of Garifuna territories. (Photo: Steve Pavey)

Narcos, long interested in the strategic characteristics of the land for clandestine drug running — including space for a runway, a hidden creek to the sea, and its remote location — had invaded the legally titled Garifuna lands. In 2012, the community reoccupied its land with drumming and ceremony, despite threats and automatic rifle fire.

Since then, however, a portion of the land has been re-invaded. OFRANEH’s strategy to win back Vallecito is to apply strong enough pressure, together with allies around Honduras and the world, that the governmental Agrarian Institute of Honduras will be forced to evict the illegal usurpers.

The future of Vallecito is complicated by the Honduran government’s plans for so-called “charter cities.” Know as ciudades modelos in Spanish, these are foreign enclaves shielded from Honduran sovereignty and financed by international investors, with their own security and laws. Vallecito is at the center of a large swath of Garifuna territory the government has in mind for this project. If it is consolidated, dozens of Garifuna communities could be displaced.

Regardless, OFRANEH plans to recover Vallecito and transform it into a center of Garifuna renewal. All community members dislocated from their lands, for whatever reason, will be able to resettle there.

Strengthening traditional Garifuna agriculture, aquaculture, and culture in general will be an integral part of the resettlement. Immediate plans include the construction of a Garifuna ceremonial and cultural center. Youth leadership development is another part of the plan, so that urban youth and young adults can learn the same skills and knowledge as Garifunas living in remote rural locations. 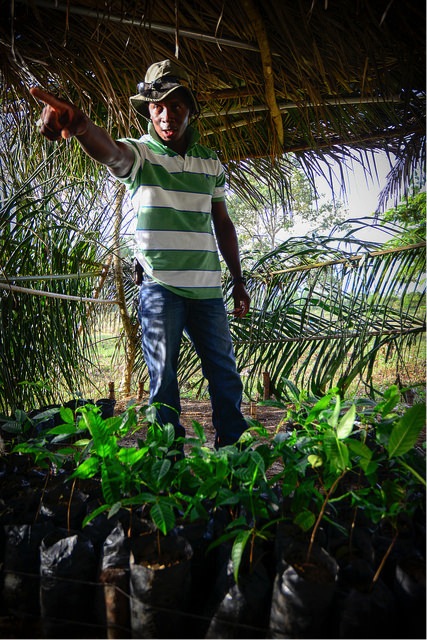 Like other indigenous and non-indigenous Hondurans standing up for their rights, the Garifunas suffer continual violence, threats, and human rights abuses. Both the land grabs and the violence surrounding them are part of a political climate resulting from a coup d’état against President Manuel Zelaya on June 28, 2009. Then, with the help of the U.S. government, a clique of the top oligarchs of the nation swept to power.

Since then, the U.S. government has played an enabling role with a series of post-coup regimes, funneling more than $114 million to Honduran security forces, providing political cover, and looking the other way as human rights violations mount. Hundreds of assassinations of opposition organizers and their family members have marked Honduras in recent years, bringing to mind the death squads of the 1980s.

In addition to the government’s impunity and corruption, the illegally imposed congress has conceded valuable land and minerals to foreign investors. Beyond what is happening in indigenous communities, campesino land across the country is being grabbed by agribusiness — and in particular by Honduras’ richest man, Miguel Facussé, who presides over a thriving empire of African palm plantations planted to feed the craze for biofuel in the North.

“If you map out the conflicts that are threatening our country, you’ll see they reflect exactly where transnational capital is trying to take more resources from indigenous peoples,” said Miranda on a speaking tour in the United States last year. “We ask ourselves: Hmm, are we the ones consuming all this energy? If those in the North are the consumers, why are we in Honduras paying? Why are we being displaced to generate energy for others?

“If the problem is global,” she continues, “we have to have a global response. It’s time for every human being in the global North to take up his or her responsibility in respect to the use of resources, responsibility relative to waste and to consumption. The standard of living that you all have in the U.S. is unsustainable. You are the button-pushers. The time has come.”

Stephen Bartlett is the Latin America Liaison for Agricultural Missions. Beverly Bell is an Associate Fellow at the Institute for Policy Studies and Coordinator of Other Worlds. She has worked with indigenous movements in Honduras for 15 years.