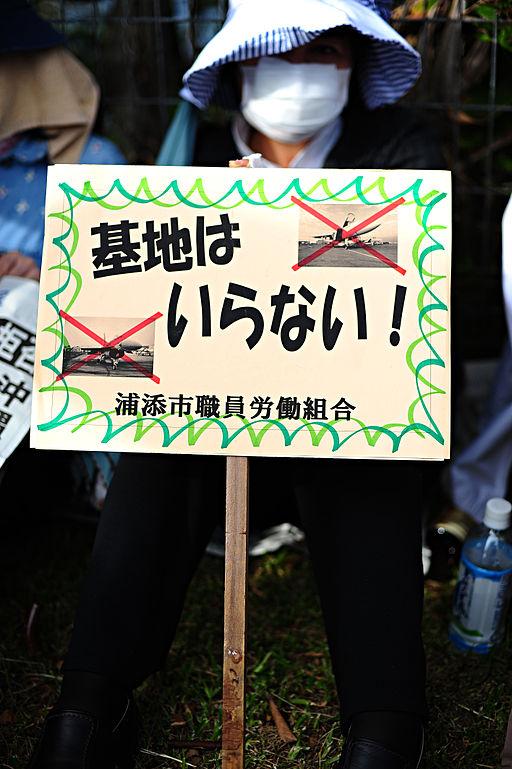 Okinawans are going to the polls to register their opposition to a military base plan supported by both Tokyo and Washington.
By Greg Chaffin | November 24, 2010 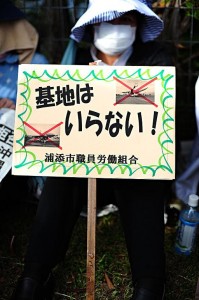 The debate over the controversial plan to relocate a U.S. Marine air base from Futenma to Henoko is set to heat up again. Last June, then-Prime Minister Yukio Hatoyama resigned after failing to keep his campaign promise to move the air base off of Okinawa and acquiescing to U.S. pressure to hold to the original 2006 force realignment agreement. His successor, Naoto Kan quickly reiterated his administration’s willingness to adhere to the agreement, and both Washington and Tokyo sought to move on from what had grown into an ugly conflict between the two allies.

However, debate over this issue has continued to simmer and is set to erupt again as a result of the November 28 gubernatorial election in Okinawa. The result of this election could have far-reaching consequences for Tokyo and the alliance.

Okinawa is comprised of 49 small islands, making up 0.6% of Japan’s total land area and contains roughly one percent of the Japanese population. This strategically significant archipelago, equidistant from mainland Japan, Korea, Taiwan, and China, houses 21,000 U.S. military personnel, including the III Marine Expeditionary Force, of which Marine Corps Air Station Futenma is a part.

The realignment agreement stipulates the relocation of Marine Air Group 36 from MCAS Futenma to a new facility attached to Camp Schwab in Henoko. The runway design of the new facility will require builders to reclaim land from Oura Bay. The agreement also details the withdrawal of 8,000 marines along with 9,000 dependents to Guam. The Japanese government will contribute approximately $6 billion of the estimated $10 billion cost of the relocation plan.

Earlier this year, at the height of the controversy, over 90,000 protestors gathered on Okinawa to express their opposition to the relocation plan. Recent polls paint a starker picture, with 84 percent of Okinawans opposing the plan. Their frustration is the culmination of several factors: the invasive nature of the U.S. military presence, crime associated with the emergence of red-light districts surrounding several bases, accidents involving U.S. units, and concern over environmental preservation. These factors are exacerbated by Okinawa’s desperate economic situation. Okinawa has the lowest per capita income and highest unemployment rate in all of Japan. Furthermore, the lack of employment opportunities has led to a brain drain from the island as most educated Okinawans have moved to the mainland. Along with the tourism industry, most opportunities are found at the bases themselves or the result of economic programs initiated by Tokyo to compensate for the basing burden. Perhaps most salient is the general feeling among Okinawans that they have shouldered too much of the U.S. military burden for too long.

Opposition to the relocation plan has already played a prominent role in Okinawan elections. In January, Susumu Inamine defeated a pro-base incumbent in the Nago City (the city administering Henoko) mayoral election, with the promise that he would not allow the relocation plan to move forward. In the more recent Nago City Council elections, Inamine’s supporters won a majority and have since called for the repeal of the relocation plan.

All eyes now turn to the governor’s election, less than a week away. Crucially, the governor must sign off on the reclamation (as Oura Bay is publically owned) project before construction can begin. Armed with what amounts to a veto, the next governor will be uniquely positioned to either consent or block the plan and thereby make life very difficult for Tokyo and Washington.

Squaring off in the gubernatorial election against incumbent Governor Hirokazu Nakaima is former Ginowan City Mayor Yoichi Iha and relative outsider Tatsuo Kinjo. The future of the relocation plan has taken center stage, and its importance to the electorate is reflected in the campaign platforms of the two major candidates, Nakaima and Iha (the third candidate, Kinjo, backed by the Happiness Realization Party supports the relocation plan, although his candidacy is not particularly serious). To garner support Nakaima and Iha have sought to tap into the strong opposition to the plan and the general frustration over the negotiation process.

As the former mayor of Ginowan City, which contains MCAS Futenma, Yoichi Iha has long opposed its operation and has been unequivocal in his calls for the replacement facility to be moved outside of Japan entirely. Furthermore, Iha has been adamant that the land be returned to Okinawans. He has vowed to refuse to discuss the relocation plan with Tokyo. Iha has been critical of Nakaima’s about-face over the plan and remains skeptical of Nakaima’s motives and his stated commitment to opposing Tokyo.

The Japanese government is concerned about Iha’s clear opposition to the current relocation plan and his unwillingness to compromise. To the ruling DPJ, Iha’s election stands to further complicate and exacerbate an already contentious issue that has already brought down one government, and may bring down another.

Incumbent Hirokazu Nakaima, backed by Okinawa’s Liberal Democratic Party (LDP) and the New Komeito, has been less explicit regarding his position on the relocation plan. Indeed, Nakaima originally endorsed relocation from Ginowan to Henoko. However, following the upsurge in popular opposition, culminating in the success of anti-base politicians, Nakaima has shifted his stance and now maintains that the Marine base should be relocated outside of Okinawa, preferably to mainland Japan. Nakaima has also been critical of the DPJ over its handling of negotiations and its dismissive attitude toward the residents of Okinawa. Although Nakaima has reversed course over the relocation issue, he maintains that the Japanese government must back away from efforts to cut the wages of Okinawans working on U.S. bases. Interestingly, his new stance has put him at odds with the national LDP party, which supports the 2006 agreement, and has not endorsed his candidacy.

Nakaima argues that although the relocation plan has become politically untenable, maintaining good relations with Tokyo is imperative to Okinawa’s economic future. However, his failure to take a hardline stance has given rise to the concern that, if elected, he might backslide from his current position, given the right incentives from Tokyo.

The View from Tokyo

The Kan administration is growing increasingly concerned over the situation developing in Okinawa. It finds itself caught between Japanese public opinion and American pressure to stick to the agreement. After rising to power following decades as the opposition party, the DPJ is worried that failure to resolve this issue will lead to its downfall. Indeed, an inconsistent approach, which culminated in acquiescence to American pressure, proved the undoing of Hatoyama’s administration; the DPJ is trying to keep history from repeating itself. Unfortunately, the options are few and none of them appealing.

A telling indicator as to just how far the DPJ’s stock has fallen in Okinawa can be seen in their unprecedented refusal to advance a candidate in the gubernatorial election. With no candidate to support, the local chapter of the party has been instructed to “vote as they see fit.”

The election of either Nakaima or Iha puts Tokyo between a rock and a hard place. Both candidates have been highly critical of the central government’s handling of the situation and have centered their campaigns on the removal of Futenma from Okinawa. However, for Tokyo, Nakaima is the lesser of two evils, with Iha taking a hard-line approach, and refusing to even hold discussions over the replacement plan should he be elected. Since Nakaima has not ruled out further discussions with Tokyo, the administration is hoping that with adequate incentives, the incumbent will acquiesce to its demands.

In addition to economic incentives to get Okinawans to reconsider the agreement, the central government has a final, albeit drastic and likely suicidal option, should the next governor block the relocation plan. Under current Japanese law, reclamation of land under the public waters of Oura Bay for private use by the U.S. military would require the governor’s approval. However, the central government could amend federal law to by-pass the governor and instead put it to a vote in the Diet. Such a resolution would likely pass with, ironically enough, the support of the opposition LDP. However, this stratagem would almost surely lead to the demise of the DPJ ruling coalition and the Kan administration. The DPJ would not likely risk its grip on power in such a manner, although it might use the threat to strong-arm Okinawa into accepting the relocation plan.

A difficult road lies ahead as the inhabitants of Okinawa confront both Tokyo and Washington. Attempts to reconcile the population with the relocation plan have met such stiff resistance that it has become politically impossible. Unfortunately, there seem to be few palatable alternatives. For Tokyo, simply increasing federal subsidies to Okinawa in a transparent effort to buy off the populace is no longer a viable option, nor is ignoring popular frustration with the negotiating process. The Japanese government must be willing to push back against U.S. pressure on behalf of its citizenry. However, territorial clashes with China coupled with the flare-up of tensions on the Korean peninsula have led many in Japan to advocate tightening the alliance with the United States.

Furthermore, Washington must endeavor to play a constructive role in this debate. By entrenching itself firmly in opposition to the wishes of Japanese citizens, the United States only makes this issue that much more contentious and difficult for the Japanese government, further forestalling its resolution. Instead, Washington should adopt a more cooperative stance as a responsible partner with Japan and attempt to assist in the resolution of this issue.

This may mean that both sides must be willing to make concessions. The United States may need to rethink its regional force structure; Japan may need to rethink its security role in the region. Most importantly, both the United States and Japan must not treat the alliance as a zero-sum relationship wherein one side attempts to dominate proceedings. When both sides adopt diametrically opposing positions, as was the case over Futenma, the alliance will suffer. This relationship has been integral to regional security over the past 50 years, and will continue to be so. As allies, and partners, both sides should be open and receptive to the overtures made by the other, and should endeavor to work together towards the resolution of opposing interests.

Greg ChaffinGreg Chaffin is an Intern/Research Assistant with Foreign Policy in Focus.