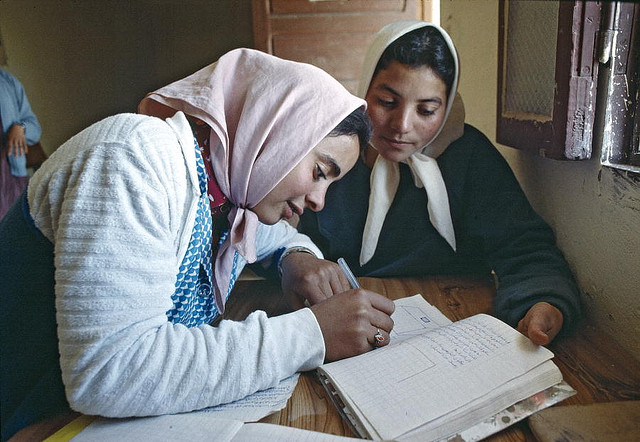 From Barcelona to Charlottesville, there’s an obvious double standard in how Trump treats terrorism. But let’s be careful how we talk about it.
By Domenica Ghanem | August 18, 2017

On August 13 I found myself giving into what’s become somewhat of an every night occurrence in the Trump administration: furiously refreshing my Twitter feed during a breaking news event.

This time it was the horror in Charlottesville. A white supremacist rally that ended in one neo-Nazi ramming his car into a crowd of counter-protesters, killing one.

I scrolled past 140-word analyses on the inconsistencies of behavior by law enforcement, prayers in solidarity, and outrage at Donald Trump’s response. I nodded to myself in agreement. But, as a Muslim, I also waited nervously for what else was coming.

Sure enough, there it was: “Can you imagine what Trump would be tweeting if a group of militant Muslims were marching, carrying guns & starting fights in the street?”

With more than 20,000 likes and over 9,000 retweets, I believe this tweet by self-described MSNBC commentator Matthew Miller was intended to combat Trump’s Islamophobic rhetoric.

But actually, it had the opposite effect.

At first glance, it seems harmless. The point he was trying to make was that Trump is a racist hypocrite because he would have named the incident in Charlottesville “Islamic terrorism,” as he likes to call it, if it were perpetrated by Muslims. Yet he refuses to call out violent neo-Nazis.

But instead, what Miller’s done is talk about Muslims in the context of militancy, even as they had nothing to do with this violence. It wasn’t just him. I saw this sentiment over and over again on my Twitter feed and Facebook timeline.

Muslims are almost never mentioned in the media except in the context of national security or terrorism. In fact, the Newseum reports, research shows that “9 in 10 of all news reports about Muslims, Islam, or Islamic organizations are related to violence — war or terrorism.”

It’s messages like these — repeated by Democrats, Republicans, and self-identifying progressives alike — that reinforce the stereotype that equates Muslims with terrorism.

I’ve even seen it from other Muslims who have internalized these pervasive Islamophobic stereotypes.

While Trump has made derogatory remarks about many other groups, no one thought to associate this incident with them. I saw no posts saying, “If a journalist were driving that car, Trump would call this a terrorist attack.”

Journalists don’t perpetrate attacks in the U.S. at rates higher than other demographics. And neither do Muslims. But the reason people think we do is because terrorist attacks perpetrated by Muslims are covered significantly more often in the media, and for longer periods of time, than those perpetrated by others.

In fact, after the recent attack in Barcelona that killed at least 13 people, it took Trump just a couple hours to respond by advocating for committing war crimes against Muslims. With a president like that, we definitely don’t need the added press of those who call themselves allies perpetuating these associations.

Instead, you could say something like: Trump regularly scapegoats and criminalizes people of color while refusing to condemn violent white supremacists.

That’s a message that clearly points out where Trump’s loyalties lie, and doesn’t reinforce Islamophobia. And better yet, it still leaves 47 characters for you to attach a relevant meme.

The bottom line is, as your mom probably taught you, if you don’t have anything nice to say about us, don’t say anything at all.

Domenica Ghanem is the media manager of the Institute for Policy Studies.