The locals in one Turkish border province take a dim view of the anti-Assad fighters making their home there.
By Andre Vltchek | October 25, 2012 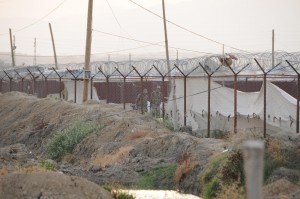 Locals say there are two types of camps for Syrians in Southeast Turkey—those for the refugees and those for the so-called opposition fighters.

My Turkish colleagues and I drove to both kinds of camps, each located near the ancient polyglot province of Hatay, a small sliver of land squeezed between Syria and the deep blue Mediterranean Sea. We also drove to several border crossings to gain a clearer understanding of the situation in this restive area.

Real refugee camps were indistinct from other refugee camps all over the world: fenced and guarded by relatively relaxed security personnel. People of both sexes and all ages inhabited them in full view.

The training facilities were located either inside military bases like Incenlik on the outskirts of the city of Adana, or disguised as refugee camps. But they always lie behind heavily guarded security perimeters.

For years, Incenlik has been a joint U.S.-U.K.-Turkish air base.

The combat facilities have been stripped of all usual trademarks of civilian camps: around them there were no women, no children, and no laundry drying in the wind—just watch towers, heavily armed guards, and an uneasy air of something forbidden.

“There is plenty of evidence that the so-called Syrian ‘opposition’ is trained on the premises of Incirlik,” said Turkish investigative journalist Huseyin Guler. “But the main training camp is, of course, near Apaydin village, a place not far from Hatay. I have been based in this area for almost two years, and after investigating almost every night, I can say with certainty that men who are taught at Apaydin Camp are crossing the border every night, and recruiting and training Syrians on the other side. They are carrying weapons as they walk in direct view of the Turkish border guards.”

We drive to one of the borders, at Cilvegozu. There, both the border guard and several taxi drivers confirm Guler’s account.

“It used to be that the border was open for both Syrians and Turkish citizens,” explains a cross-border taxi driver. “I was taking people all the way to Aleppo. Even some foreigners were allowed to cross. Now only Syrians can come back and forth. It’s all do—I drive Syrians from Syria to Turkey and Turkey to Syria between two border posts, as I can only come as far as the Syrian border station. I can’t really enter Syria anymore. Every night there are Syrians coming to Turkey, most of them at dawn. Some are injured, apparently after some fighting.”

Local people of Hatay are frightened. This used to be a quiet region, among the most multicultural in Turkey. Alongside sizable Armenian and Jewish populations, Arab Alawites and Sunnis have lived in peace here, side by side, for centuries.

“Now there are Qatari and Saudi extremists running around here,” explains a tearoom owner, looking around for government spies and undercover police as he speaks. “The ‘opposition’ is seen here, in Hatay, as just a bunch of renegades. There are now weapons openly displayed on the streets, long beards everywhere; there are unpaid bills, and an unusually high crime rate. We are scared. The West, particularly the United States, is implanting these people here, in order to destabilize Syria. But this entire region, even the Hatay area, could soon go up in flames. People are scared.”

The Syrian opposition is not expected to respect national boundaries—they seem to have carte blanche to move between two countries at will. On September 19, 2012, The Euronews reported under the headline “Syrian Rebels control Turkish border crossing”:

This is the third Turkish border crossing to fall under the control of Syrian rebel fighters, after a fierce gun battle during which two Turkish civilians are reported to have been wounded inside Turkey. It is estimated that 300 Syrians have already crossed into Turkey via this gate, where there are upwards of 83,000 Syrian refugees. Men crossed the border in the other direction carrying bottled water to give to the rebels.

As I drove to Apaydin, the camp suddenly opened in front of me. Watchtowers and posts, soldiers pacing back and forth, barbed wires, bizarre metal pipes. Soldiers threatened me, but I managed to photograph the place anyway. The entire area had warlike feel, reminding me of the area between Rwanda, Uganda, and DR Congo where I worked just a few weeks earlier.

All the villagers were talking about fear. None of them dared to give his or her name. They were all dreaming about the past—before, as they put it, the West began destabilizing Syria.

In Istanbul, I met with Serkan Koc, a leading Turkish documentary filmmaker and director of the Ulusal television station. He is a man who has traced the “opposition” from Turkey all the way to the battles inside Syria.

“Of course,” he said, “you must realize that those people are not really the ‘Syrian opposition.’ Many of them are modern-day legionnaires collected from various Arab countries, predominantly Qatar and Saudi Arabia, and paid by Western imperialist powers. Some are members of al-Qaeda and other terrorist organizations. Most are militant Sunni Muslims. One could describe them as ‘rogue elements’ hired to fight the Assad government.”

In Istanbul and all over Turkey, people are being arrested for speaking against the Western political interests playing out in Turkey and the broader Middle East. More than a thousand generals, high-ranking officers, and progressive intellectuals are now held in various prisons, often without trial.

Tension is growing, and Turkey—more than ever—appears to be at a crossroad.

Andre VltchekAndre Vltchek is a novelist, filmmaker, and investigative journalist. He covered wars and conflicts in dozens of countries. His book on Western imperialism in South Pacific is called Oceania. His provocative book about post-Suharto Indonesia and the market-fundamentalist model is called Indonesia – The Archipelago of Fear (Pluto, 2012).