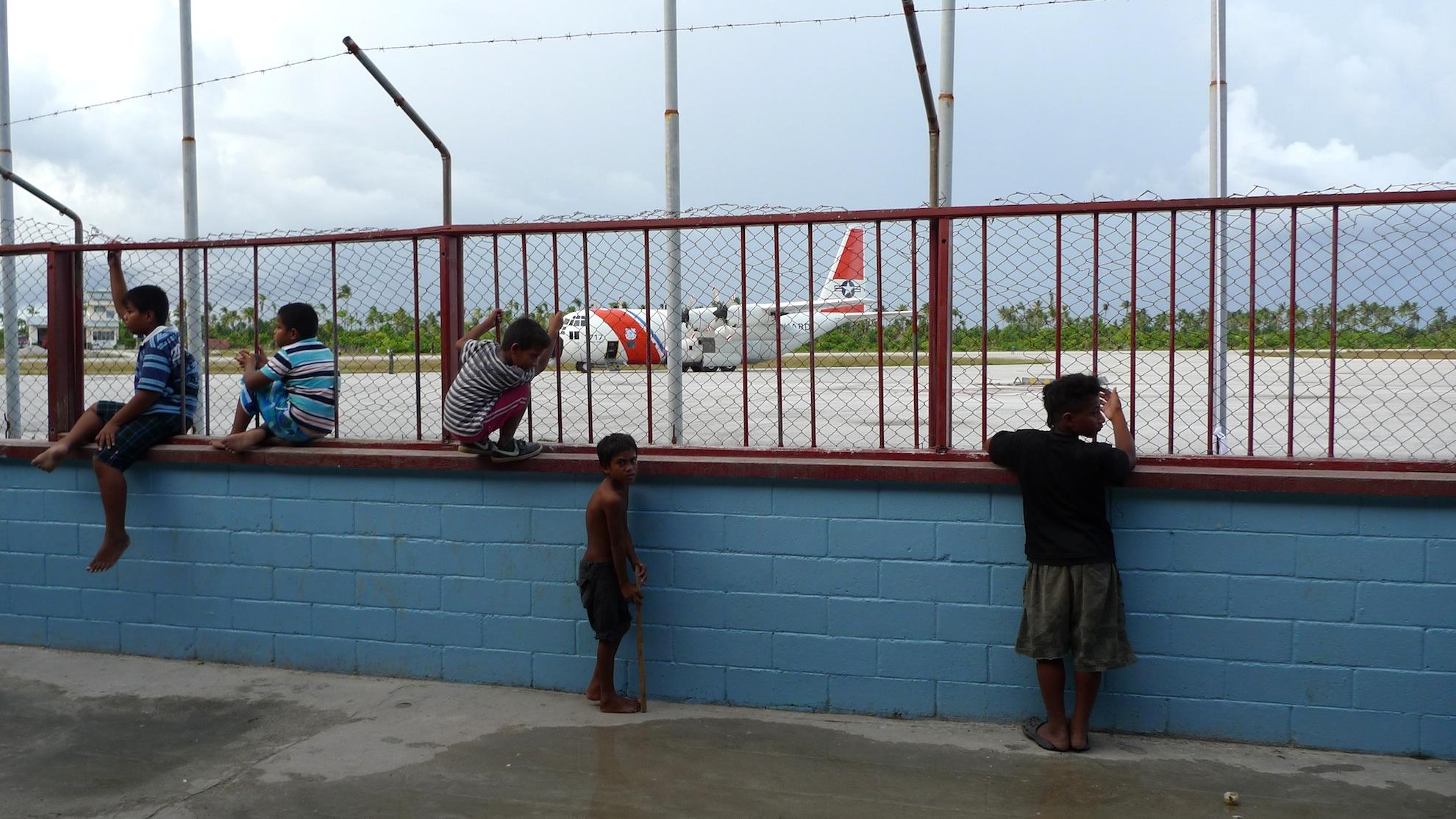 Mortally threatened by climate change, Kiribati's future will be determined by one airport runway.
By Andre Vltchek | October 30, 2012 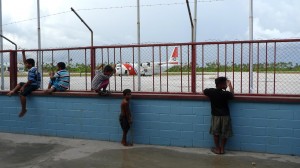 The U.S. Coast Guard Hercules plane parked at Bonriki International Airport fires one by one its mighty engines, and the crowd immediately begins to cheer. There is not much to do on Tarawa Archipelago, and the U.S. military and coastguard planes landing here for refueling almost every day are the main source of entertainment for the local people, especially children.

“They are on their way to Guam or Hawaii,” explains one of the bystanders. “Of course, they don’t tell us where exactly they are going…”

The terminal building is tiny, just a shack with several makeshift stores in the parking lot. Twice a week there are commercial flights on Air Pacific to Fiji, as well as infrequent connections to Nauru and sparse domestic flights on small propeller aircraft. Of course, these are flights only to the near islands, as a “domestic flight” here could mean over three hours on a jet plane—something that dirt-poor Kiribati will not possess anytime soon.

The runway is ludicrously oversized, capable of accommodating almost anything that flies. Just a few days would be needed, it is said, to convert the airport into a U.S. air force base.

Already the United States has “compact” agreements with three Micronesian countries: the Marshall Islands, the Federated States of Micronesia, and Palau. These agreements mean that, in exchange for cold cash and the free movement of people, these nations must accept the construction of any U.S. military base proposed for their territory, like the one that has already been functioning for decades on Kwajalein Atoll in the Marshall Islands.

There is no foreign military base here, but Kiribati is fully dependent on aid and is at the full mercy of international donors. Its phosphate deposits were exhausted right before it gained independence from the UK in 1979. It is now selling fishing rights to several Asian countries. Although it has some deposits of copra on the outer islands, the product is difficult to export due to Kiribati’s lack of appropriate maritime vessels.

The unemployment rate here stands at well over 50 percent, and the country could well be the first on earth to become uninhabitable due to rising sea levels caused by climate change. The present administration of Anote Tong is marketing Kiribati as a victimized country that is beyond salvation, harvesting funds and purchasing land in Fiji and elsewhere for the relocation of its people.

Despite the environmental emergency, the industrialized world has done very little to prevent Kiribati from disappearing. There are no substantial infrastructural projects to enforce the coast, no elevated shelters, and mangroves (some of the best defenses against the rising water) are being planted at a suspiciously slow pace.

China, arguably the only country that could deliver the massive infrastructural projects needed to defend the islands, is kept away from Kiribati. The Western nations encouraged Kiribati to “go with Taiwan,” which is known to throw money at the local governments of outer islands, fueling corruption but doing very little to defend the place from devastation.

“When we were working with China, the U.S. was deploying countless members of the Peace Corps here,” Alexander Teabo, an opposition MP, explained to me. “After this government kicked the Chinese out, the Peace Corps went as well.” He then speaks about the corruption and dictatorial tendencies of the present administration, calling it a police state.

MP Teabo insists that the people of Kiribati do not want to migrate abroad—they want to stay and defend their country. After speaking to dozens of local citizens, I arrived at the same conclusion.

It is also clear that the government is doing close to nothing to inform its people about the situation and the options they have for the future. There are hardly any climate-change-related educational programs.

But the climate may be educating people on its own. As Kaono Koura from the village of Temaiku explained to me: “People may not know much about the theory of what is going on, but they feel something very bad is happening. There are changes in seasons, for instance. During the rainy seasons there is no rain. Some small islands and islets are already gone—they ‘sank.’ And the sea water is encircling many dwellings.”

As the Air Pacific jets take their family members away, people cry lining along the runway, waving goodbye. They rejoice as their loved ones return.

There is almost no security here. Even as the U.S. military planes roll down the runway, local people park their cars along the tarmac—holding children in their arms, jumping up and down, waving.

It is this runway that will eventually decide the face of the nation. Either it will serve as the evacuation route for the entire country, or it will welcome those who will bring the ideas of how to save it.

Andre VltchekAndre Vltchek is a novelist, filmmaker, and investigative journalist. He covered wars and conflicts in dozens of countries. His book on Western imperialism in South Pacific is called Oceania. His provocative book about post-Suharto Indonesia and the market-fundamentalist model is called Indonesia – The Archipelago of Fear (Pluto, 2012).