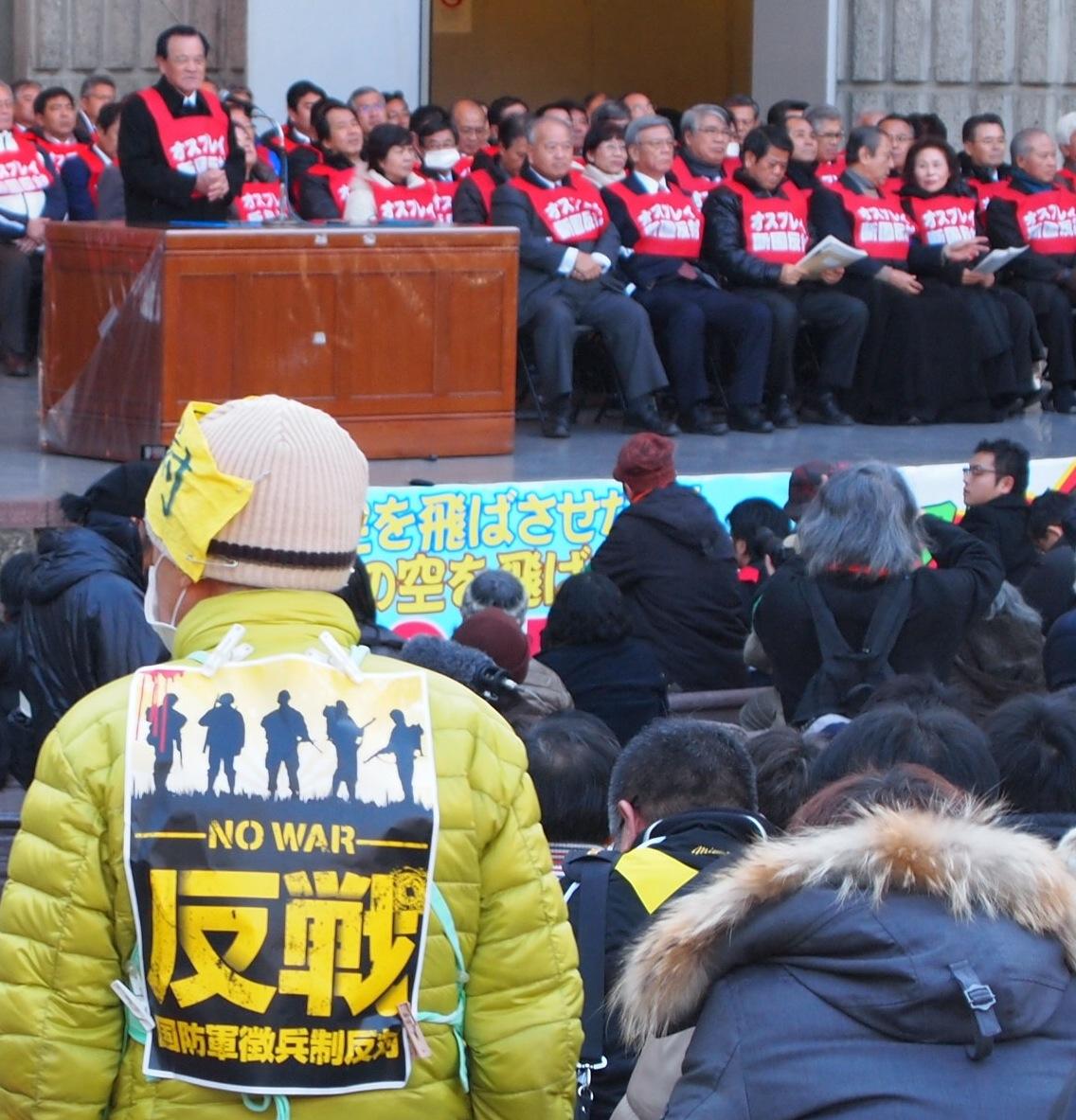 With Japanese militarism on the rise, Okinawan leaders bring an angry appeal for peace to Tokyo.
By Jon Mitchell | January 31, 2013 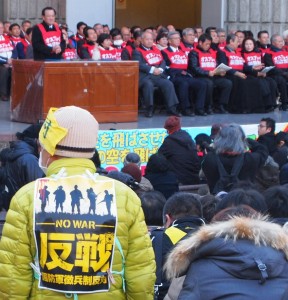 These are dark days for Okinawa.

Last autumn, the Japanese government ignored a 100,000-person protest on the island and allowed the Pentagon to station a dozen Osprey aircraft at the U.S. Futenma air base, introducing potentially dangerous aircraft into the densely populated city of Ginowan.

In December, the newly elected Liberal Democratic Party advanced its plans to construct a new military base over the pristine waters of Henoko Bay.

To top it off, the Japanese Defense Minister recently threatened to fire live tracer rounds on the Chinese aircraft that continue to buzz around the disputed Senkaku islands just 400 kilometers west of Naha.

It was against this drumbeat of resurgent Japanese militarism that more than 140 Okinawan civic representatives made a historic trip to Tokyo on January 27. This was the first time since Okinawa reverted to Japanese control in 1972 that leaders from every municipality have visited the nation’s capital. And despite the bitter cold, they were met with a warm reception by 4,000 Tokyoites at a rally in Hibiya Park.

After greeting the crowd in the Okinawan language, the leaders switched to Japanese and explained why they’d come. “Mainland Japanese,” they said, “don’t understand what is happening on Okinawa.” They described the discrimination they feel and their sense of injustice: Okinawa is Japan’s poorest prefecture, but its potential for growth is hobbled by the military bases that take 20 percent of its best land. While the speakers riled at Tokyo’s insistence to relocate Futenma within the prefecture, their strongest outrage was reserved for the Ospreys.

Tokyo and Washington have repeatedly promised that the helicopter hybrids are safe. But few mainland Japanese understand that a litany of U.S. military accidents over the past 60 years has taught Okinawans to distrust such reassurances. These crashes include an F-100 fighter jet that ploughed into Miyamori Elementary School in 1959, killing 17 people, and a helicopter that came down in flames on the campus of Okinawa International University in 2004. News of that latter accident never even made the evening news in Tokyo, where the media was too busy fawning over its athletes at the opening day of the Athens Olympics.

Following 45 minutes of speeches and a rallying cry of “Ganbaro!” (“Let’s do our best!”), the Okinawan leaders headed a march into the heart of downtown Tokyo. If the warmth of their reception at Hibiya Park had lulled them into a sense of optimism, they were soon brought back to reality on the streets of Tokyo’s glitzy Ginza district, where the roads were flanked with hundreds of Japanese nationalists waving Rising Sun flags. Ranting that the Okinawans were Chinese stooges, they lunged for the marchers only to be held back by the police.

Some of the nationalists yelled pro-Osprey slogans; others carried signs proclaiming that only a strong military could protect Okinawa.

The message must have been familiar to the Okinawans—70 years ago, Japanese nationalists waving imperial flags had told their grandparents the same thing. The result that time? Okinawa was dragged into one of the bloodiest battles of World War II, in which almost a third of the island’s civilians lost their lives alongside 110,000 Japanese and American soldiers.

It seems Tokyo has a short memory for these things—which is why the Okinawa delegation’s visit proved such a timely reminder not to listen to those keen to bang the drums of war once again.

Jon MitchellJon Mitchell is a Welsh-born writer based in Japan. In September 2012, Defoliated Island, a TV documentary based upon his research into the usage of Agent Orange on Okinawa, was awarded a commendation for excellence by Japan’s National Association of Commercial Broadcasters.