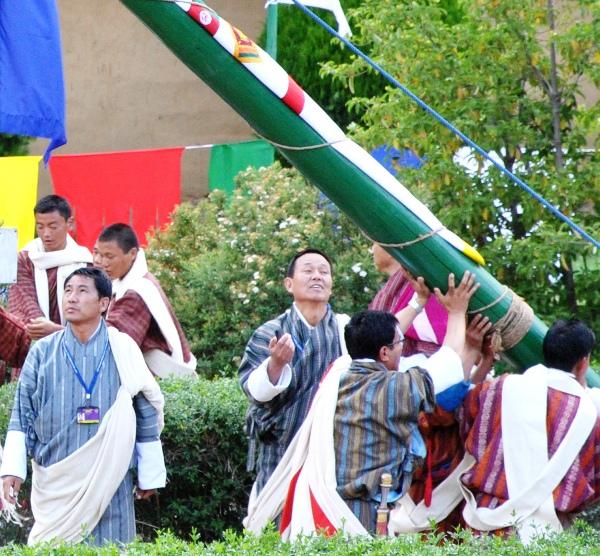 It is mandatory for all Bhutanese to wear national dress in public places. Cultural pride or a repressive state?
By Vishal Arora | May 28, 2010 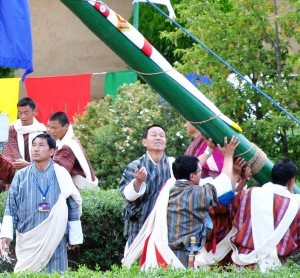 Thimphu, the capital of the Himalayan nation of Bhutan, wore its culture on its sleeve for the 16th South Asia Association for Regional Cooperation (SAARC) summit at the end of April. The uniform architecture of the buildings and colorful flags fluttering on both sides of the streets welcomed delegates from the nine member states (Nepal, India, Bhutan, Bangladesh, Maldives, Sri Lanka, Pakistan and Afghanistan) and the nine observer states, including China and the United States. Bhutan’s display of its culture was a strong assertion of its sovereignty, as well as its distinctiveness from neighbors India and China.

Making the distinction even more prominent were local men wearing knee-length robes, known as gho, their national dress, and the women, the ankle-length kira. Though it’s mandatory for all Bhutanese to wear their national dress in public places and at certain functions, many flout the law. But during the summit, no one dared.

A hotel staff in Thimphu said he was wearing the gho only because he didn’t want to go to jail. His other complaint was about the discos and nightclubs being forced to close during the summit. The paradox of the lives of Bhutanese citizens is in the freedom to defy traditional values, while being bound by law to preserve all the visible aspects of culture.

The age-old culture of Bhutan, until recently one of the most isolated countries in the world, serves as a shield against powerful foreign forces. Bhutan’s fourth Dragon King, Jigme Singye Wangchuck, said in the 1970s: “Being a small country, we do not have economic power. We do not have military muscle. We cannot play a dominant international role, because of our small size and population and because we are a landlocked country. The only factor we can fall back on…which can strengthen Bhutan’s sovereignty and our different identity is the unique culture we have.”

Even two years after Bhutan became a constitutional monarchy, the fear of survival doesn’t seem to have vanished completely. It’s a tiny nation between two giants, and its two neighbours, Sikkim and Tibet, fell to the greater powers. In 1950, China invaded Tibet, and, in 1975, India incorporated Sikkim, a Buddhist kingdom, through a referendum.

But restrictions rooted in this fear have taken their toll on the Bhutanese youth. “We cannot speak against the government openly. And any form of creativity that deviates from the tradition is not encouraged in the country,” complained a young government official requesting anonymity.

“Bhutan cannot afford to have disturbances and uprisings which accompany freedom,” explained Bhutan’s Home and Culture Minister Minjur Dorji. “We are such a small nation between two large countries. We have survived because of our religion and our culture,” he added.

But as Bhutan gains more confidence — as evident in it hosting the South Asian summit for the first time — greater freedom for its people is not too far away.

Vishal AroraVishal Arora is a journalist based in New Delhi, India and a contributor to Foreign Policy In Focus. He writes and researches on politics, culture, religion and foreign relations in South Asia.