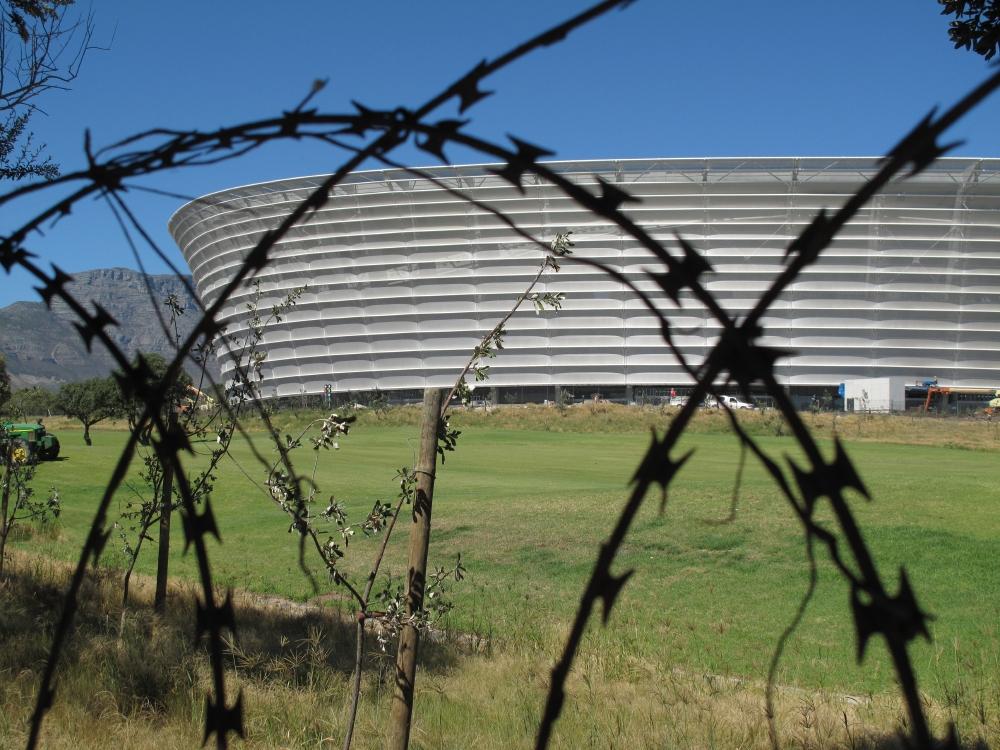 Africa is getting its first World Cup this year. But not everyone in Cape Town is enthusiastic.
By Andre Vltchek | April 5, 2010 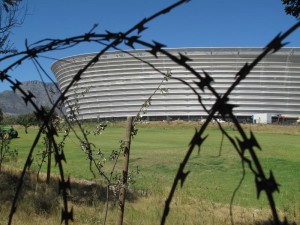 The 2010 FIFA World Cup is coming to Cape Town, the first to be held in Africa. But the anger of many South Africans is brewing. The righteous wrath stems from the continuing social rifts that divide this “rainbow nation” along racial lines. Sadly, xenophobia and extreme nationalism are also muffling the legitimate demands of the poor.

“There will be hundreds of thousands of people from all over the world coming here to enjoy football,” laments Thabo, a shoe cleaner in the flashy, Dubai-owned part of Cape Town’s waterfront. “But what will this ever bring to us? What will be the benefit to our poor people? Foreign visitors will get free services like electricity and water — something that many locals still can’t afford.”

Shiny and imposing, the new Cape Town Stadium is impressive in its size and elegance. Built near the sea with Table Mountain as dramatic backdrop, it can accommodate nearly 70,000 people. But just a few miles away, in slums like Lagata, people are still struggling for survival, often without basic services and with almost no hope of upward mobility. From their point of view, the roughly $2 billion spent on stadiums and infrastructure is an extremely bad deal for the nation.

“We had many uprisings here, for years,” explains Salim Valley, senior researcher at the Center for Education Rights and Transformation at the University of Johannesburg. “Protests and uprisings were happening even long before financial meltdown and market crash. Most of the protests were against the bad delivery of services, including the housing provided by the state that was constructed from low quality materials. The ‘Reconstruction and Development Program’ (RDP) has been nicknamed ‘Really Delayed Promises.’ But protests are picking up now, as the World Cup is approaching. For instance, the Conference on Democratic Left of which I am a member is planning national meeting on April 23, and people are already proposing how to take action against World Cup, which they see as a waste of money.”

According to Mary-Anne Munyembate, head of litigation at the Centre for Applied Legal Studies at the University of the Witwatersrand in Johannesburg, “There have been numerous cases of forced housing evictions resulting in court cases due to South Africa’s hosting of the World Cup. In Johannesburg, the private owners of apartments are evicting tenants to ‘renovate’ the apartments in order to rent them at much higher rent to visitors coming to the World Cup. Another tactic used by those owners is the sudden hike of apartment rents to force tenants out. At the same time, there has been rising tension between South Africans being pushed out of their housing and foreigners looking for accommodation.”

However, there is an ugly side to some of protests. Xenophobic groups in South Africa are calling to arms against all foreigners, rich or poor, including immigrants. That is dangerous, especially given the May 12, 2008 riots, where a series of locals mainly in Johannesburg attacked migrants from Mozambique, Malawi and Zimbabwe, killing two people and injuring 40 others.

Andre VltchekAndre Vltchek is a novelist, journalist, filmmaker and photographer. He lives and works in Asia and Africa. His work can be found at http://andrevltchek.weebly.com/