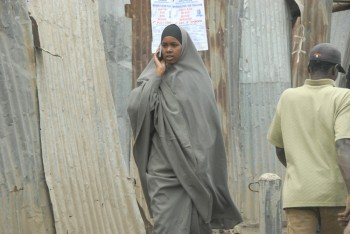 As Somalia collapses, it threatens to take Kenya down with it.
By John Feffer, Andre Vltchek | July 24, 2009 The streets of Eastleigh, a neighborhood of Nairobi known as “Little Mogadishu,” are full of deep potholes, dust, and exhaust fumes. Somali women, many covered from head to toe, are braving the traffic. The smell of traditional Somali spices competes with the smoke from badly maintained engines. The traffic eases and the hubbub dies down only after the calls for prayer from countless neighborhood mosques.

It feels like chaos to random foreigners who visit this neighborhood. But with the large influx of Somali refugees, even the native citizens of Nairobi feel out of place here.

“They have their own rules in Eastleigh,” explains Noela Oyoo, an assistant at one of the UN agencies in the capital. “But not only here. Also some middle-class neighborhoods like South Sea are taken over by Somalis. These places have nothing in common with Kenya, anymore.”

War-ravaged Somalia has sent over 300,000 refugees to overcrowded Kenyan camps of Dadaab, Hagaldera, Dagaaley, and Ifo. In June alone, fierce fighting between the embattled Somali government and insurgents displaced over 150,000 people in the country. Several Somali parliamentarians escaped from the country, fearing for their life.

With reports of foreign jihadists streaming into Somalia, western security services are frightened Osama bin Laden’s al-Qaeda network could get a grip on the failed Horn of Africa state,” the Kenyan newspaper The Standard commented at the end of June. “Nairobi expatriate circles have been awash with alerts and rumors of a planned attack by Somali militants.”

“They don’t even have to attack,” explained a leading Kenyan lawyer who didn’t want to be identified, fearing for her and her daughter’s life. “Al-Shabaab guerillas are already in the capital. They didn’t use weapons — they bribed their way into Nairobi, bought property and Kenyan passports.”

In June, Kenyan military amassed troops and artillery on the Somali border, contributing to rumors that it was ready to invade to stabilize the border area. But the warning from the other side was swift and chilling: “If you attack us we will launch suicide attacks in Nairobi and we will destroy the tall glass buildings,” declared the spokesman of al-Shabaab in Kismayu, Sheik Hassan Yacqub Ali. The situation on the border remains tense.

“The problem here is simple and concrete: the potential for terrorism,” explained the head of the Social Democratic party of Kenya, Mghanga Mwandawire, for this article. “Al-Shabaab is connected to al-Qaeda. Their influence is not only in Nairobi. Their people are now establishing themselves in the port of Mombasa and elsewhere along the coast. In the poor Garissa their investment is now around 60%. The money comes from the jihadists and from the piracy on the high seas.”

The groups from Somalia are now taking full advantage of the growing lawlessness in Kenya. Last year, tribal post-election violence left at least 3,000 Kenyans dead. Drought and economic crises are bringing one-quarter of the population close to starvation. Corruption is rampant. The U.S. think tank Fund for Peace ranked Kenya 14th out of 20 countries considered in the “critical” category in its failed states index. Once considered to be a proud star of East Africa, Kenya is now on its knees.

The relationship between the Obama administration and the Kenyan government remains cold. Obama recently decided to visit stable Ghana, avoiding Kenya with which he has ancestral ties. And in Kenya many feel that the sole superpower does not pay enough attention to deteriorating situation in the region. To many inhabitants of Nairobi, some sort of confrontation between jihadists in Somalia and the weakened Kenyan state seems inevitable.

John Feffer, Andre VltchekAndre Vltchek is a novelist, journalist, filmmaker, and playwright, co-founder of Mainstay Press, and a senior fellow at The Oakland Institute. A contributor to Foreign Policy In Focus, he is presently living and working in Southeast Asia and East Africa, and can be reached at: andre-wcn (at) usa (dot) net.