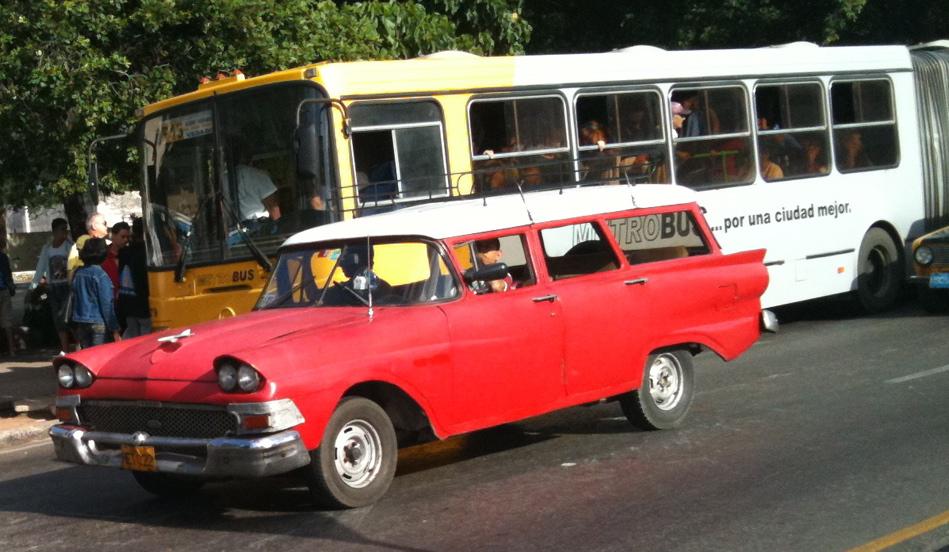 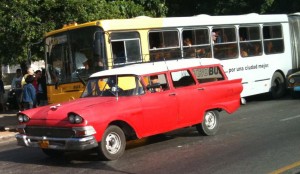 Just about everything you hear about Cuba in the U.S. media is a lie. I learned that from the moment my TACA Airlines charter jet landed in Havana last Sunday. It was filled with Cuban-Americans returning to their homeland carrying clothing, DVDs, microwave ovens, electronic games, and other consumer goods missing from the Cuban market. I’d always read that the “Miami Cubans” hated the very thought of socialist Cuba. So I was surprised and even a little shocked when the entire plane burst out in loud applause when we touched down. My fellow passengers, I realized, were happy to be back and see their families, even though life is tough and frustrating in the land they still call home.

I’ve been in Havana this week to conduct research and engage in dialogue with students and faculty at the Jose Marti Institute of Journalism, a study center for reporters and editors from Cuba and throughout Latin America. This is my first trip to Cuba and my first time ever in a socialist country. From the many conversations I’ve had, the dominant U.S. media messages – that Cubans are living in fear, crave American-style democracy and capitalism, and are hostile to American interests – are facile justifications for a U.S. embargo and other Cold War anachronisms that should have been abandoned long ago.

Take the issue of national security, which dominated my discussions at the Institute. In the eyes of the U.S. government and the conservative media, Cuba is a major threat to U.S. interests and is fanning the flames of anti-American terrorism by supporting Venezuela and other governments hostile to the United States. Yet Cubans consider themselves, quite rightly, among the earliest victims of terrorism.

The worst incident of terrorism occurred in 1976, when a Cubana Airline DC-8 carrying 73 people – including the Cuban national fencing team plus 11 Guyanese traveling to Cuba to study medicine and five North Koreans – was destroyed by a bomb planted in the cargo hold by a gang led by the notorious terrorist Orlando Bosch. According to researchers at the Cuban Research Institute on State Security, a total of 3,478 Cubans have been killed and 2,099 injured in terrorist attacks in or around Cuba since 1959 – slightly more than the number of people killed in the 9/11 attacks on New York and Washington. “We will never accept terrorism as a weapon of war,” a former Cuban military officer told me. On the issue of terrorism, Cuba should be an ally, not an enemy.

But the most obvious sign of U.S. policy failure is the 50-year economic and trade embargo and the restraints on American travel to Cuba. These policies hurt ordinary Cubans and deprive Americans of their right to see Cuba and see for themselves what is happening here.

The signs of the embargo, which bans most trade between Cuba and the United States as well as normal trade with U.S. allies such as Japan – can be seen throughout the city of Havana. Prices of basic imports, such as aspirin or toothpaste, are three or four times higher because they must be purchased through third countries. Electricity must be conserved; at a shopping center I visited one evening, the lights were so dim I could barely see the stairs. Consumer goods, such as paint for the aging, dilapidated houses and apartments here, or everyday items such as Tupperware, are difficult to impossible to find. There are constant shortages. Local cafes, for example, don’t have enough coffee right now.

Yet despite the difficulties, the Cuban government manages to keep its well-run clinics and hospitals stocked and operating. And buying gasoline for automobiles (including the hundreds of classic 1950s American cars) doesn’t seem to be a problem, thanks to Venezuela.

There are many complaints about how things are run, of course. Customer service is almost unknown, a perennial problem in socialist economies where there are few incentives for state workers. Workers in stores and offices can be painfully slow and non-responsive. This is particularly shocking for the dozen or so American students I met at my guesthouse, who told me of waiting for three hours or more just to buy a simple commodity such as a phone card. At restaurants, waiters were attentive and efficient But at two places, including a fine place on the Havana waterfront, the bathrooms were inexplicably backed up and overflowing. Hot water is hard to come by (it had been missing from my guesthouse for two weeks). Grocery stores are generally open only from eight in the morning to four in the afternoon, making shopping a major chore for people who work all day.

Despite the problems, Cubans press on and persevere. They honor the revolution. They talk with great respect and admiration for Fidel Castro, who remains actively engaged in intellectual and political discussion. They take tremendous pride in the doctors, nurses, teachers, and technicians they’ve sent to places like Haiti and Brazil, and the many journalistic and academic exchanges they have with Latin America. And visiting Americans are welcomed with open arms; the affection for our country, our culture (and our baseball) is overwhelming. I was amazed at the deep knowledge my friends at the Institute have of the US political system, its leaders and the recent congressional elections. This is a country that belongs in our circle of friends, and ending the embargo should be one of our first orders of business as a nation.

Tim ShorrockTim Shorrock is a Washington writer and longtime contributor to Foreign Policy in Focus. His articles about Korea have appeared in The Nation, The Progressive, and many other publications. His book, Spies for Hire: The Secret World of Intelligence Outsourcing, was published in 2008.