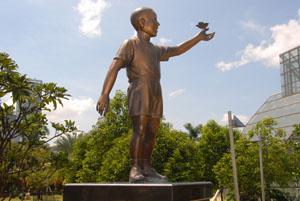 A new statue of Barack Obama in Jakarta is the focus of protest.
By Andre Vltchek | February 16, 2010

If Barack Obama showed up one afternoon in front of his own statue in Jakarta, he would almost certainly feel embarrassed. Erected at the end of 2009, the three-foot bronze statue depicts a young boy in shorts with a slightly loopy grin on his face. His left hand, on which a butterfly is landing, points toward the sky.

From an artistic point of view, the statue is hideous. But in Jakarta, pop culture trumps artistic excellence. “Obama’s rise to the White House was really moving. [His rise] is not only a reflection of American democracy, but he’s become a pop culture icon like Che Guevara,” historian J.J. Rizal from the University of Indonesia declared recently in support of the statue.

But not everyone likes the statue, which until recently stood in tiny but centrally located Menteng Park. The growing opposition to the statue is not particularly ideological. Rather, it is based more on a nationalist belief that home-grown figures should be cast in bronze for display in one of the few green places of a capital city with little in the way of public space aside from shopping malls.

Several Facebook groups have led the opposition movement, even participating in a class action suit. “The historical reason of the statue is unacceptable. Even if Obama has a history in Menteng, it’s only limited to SD Menteng [SD Menteng 01 Elementary School, which Obama attended], so why isn’t the statue put up there instead of at the park?” the legal counsel for the suit told The Jakarta Globe. “The inspiration reason is questionable as well. Does Indonesia have no other national heroes that could be put up as their inspiration? We have Ki Hajar Dewantara, R.A. Kartini, and Ahmad Dahlan.”

One of the best Indonesian writers, Linda Christanty, was similarly confused. “Why should Obama’s statue be displayed in the center of Jakarta?” she wrote to me. “Why didn’t they erect statues of the reformation heroes — people who were kidnapped during the Suharto era? Such statues would serve as a warning. It could help to prevent some terrible crimes from happening again — crimes like the forced disappearance of the people.”

Jakarta’s City Park and Cemetery Agency announced last month that it would review the possibility of removing the statue from Menteng Park. And indeed, on February 14, the statue was removed from Menteng Park. It will likely be moved to the school Obama attended as a boy and which he is expected to visit during his trip to Indonesia next month.