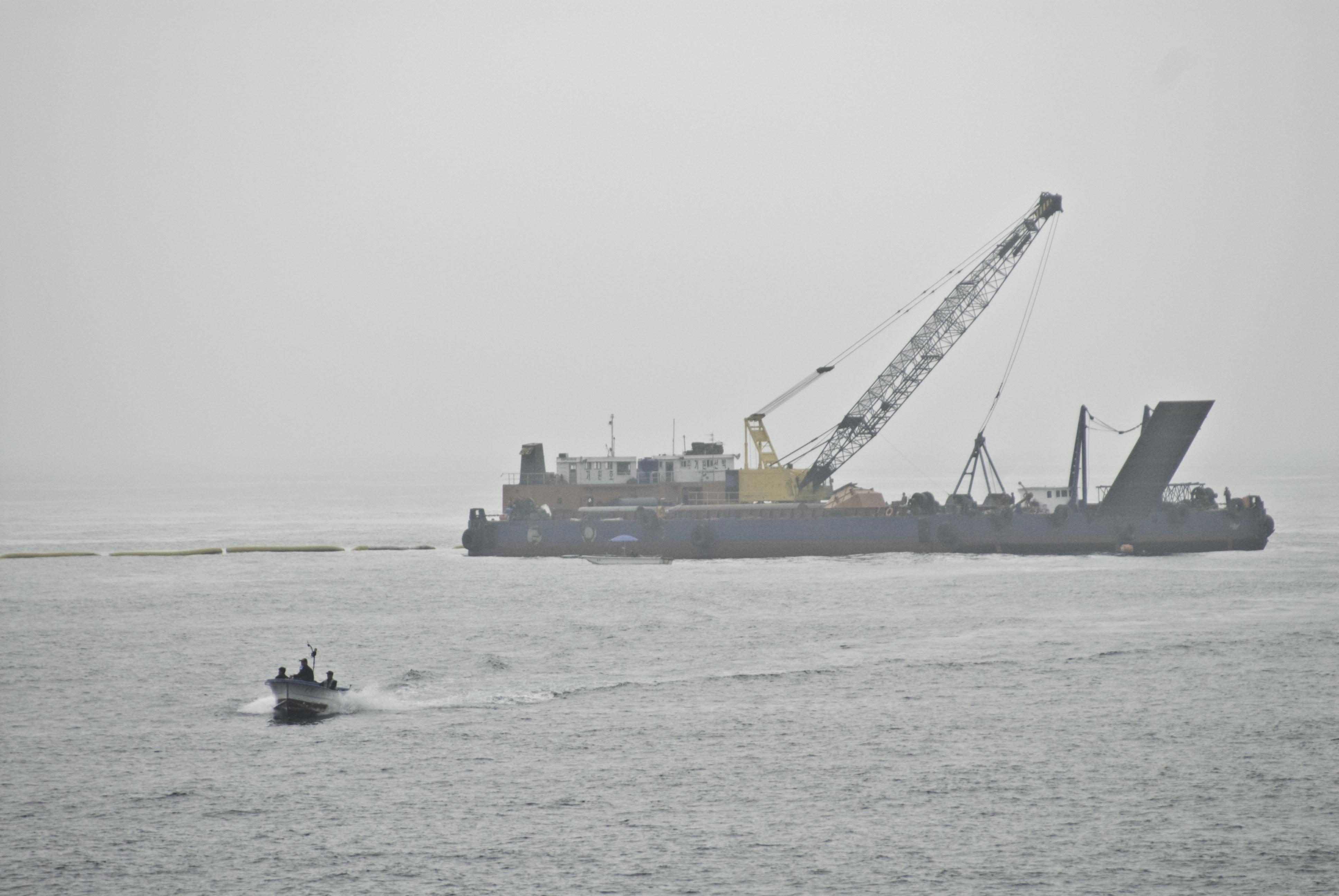 A proposed naval base on the South Korean island of Jeju has encountered fierce resistance from the residents.
By Nicole Erwin | July 4, 2011

The Samsung-owned dredging barge arrived in Gangjeong on June 20 to deliver blocks of concrete for a controversial South Korean naval base. Gangjeong sits on the south side of Jeju Island, the only place in the world to receive “triple crown status” from UNESCO for its unique geography. The former Roh Moo Hyun government also designated Jeju as a “peace island” as a form of apology for a government-sponsored massacre that took place there in 1948. In May 2009, when South Korean government confirmed the decision to place a naval base on Jeju, an opposition movement immediately formed.

On June 20, Ganjeong leader Kang Dong Kyun along with Song Kang Ho, a retired member of the religious peace-building organization called The Frontiers, boarded a local fishing boat to demand that the dredging barge leave. The standoff became physical. As Kang and Song attempted to climb upon the barge, Samsung workers and South Korean naval officers ordered them to leave the vessel. In the ensuing conflict, the barge workers aggressively kicked Song in the head and stomach and violently attempted to remove him from the barge.

Villagers and activists, angered by this violence, confronted the police, the Korean naval personnel, and Samsung workers in a series of actions. In a phone interview, Captain Lee Eun-Guk of the Jeju naval base business committee said that Song fell on his own and that the South Korean navy was not responsible for any physical harm. He went on to say that Gangjeong resisters had instead inflicted physical harm on the workers aboard the ship.

“Samsung was blocked from pouring concrete today, so it was a success,” says Yune Pak, a member of The Frontiers.

Many Ganjeong villagers have been against the building of the base since its inception. Former Jeju Governor Kim Tae-hwan survived a recall vote over his plan to allow the base in early October 2009. The Jeju Elections Commission concluded that the vote was invalid after a turnout of only 11 percent of the 33 percent required. When newly elected Governor Woo Keun Min arrived in office, he again halted the construction. There were rumors in the Ganjeong that voters had been bribed to vote in favor of the base, while others said the ballot was confusing, that they’d voted for a base but not in their back yard. A final vote in Gangjeong, however, showed that 62 percent of eligible voters chose to accept the government proposal unless another location chose to house the base.

Jeju is in the center of Northeast Asia, giving the island a political and geographic advantage. To the east, the island faces Tsushima Island and the Japanese territory of Janggi, with the South Sea and East China Sea in between. To the west, Jeju faces Shanghai across the East China Sea. The South China Sea lies south of the island, while the mainland of South Korea lies to the north.

Bruce Gagnon, coordinator of the Global Network Against Weapons & Nuclear Power in Space, has visited the base site twice in support of the resisters. “It’s my contention, and this is shared by many other analysts, that the United States is massively expanding its military within this particular region in order to develop the military capability to be able to essentially hold China hostage if it wishes to. At the same time the United States is also now encircling Russia. It turns out that Russia has the world’s largest supply of natural gas. And so it’s all about who controls the energy resources of the world these days, at a time when we know that fossil fuels are declining.”

Responsible for bringing most of the international attention to Gangjeong is protester and artist Choi Sung Hee. She was arrested on May 17, 2011 while holding a banner that read “Touch not one flower, not one stone!” More than a month later, Choi sits in her prison cell restricted from media contact and allowed one ten-minute visit per day. A hearing held on June 10 accused the artist of obstructing the business of the construction company. Minbyun Lawyers for a Democratic Society, which has taken up her case, is arguing that simply holding a sign does not obstruct business.

Of the 1,900 Gangjeong residents, about half are opposed to the presence of the naval base, which is the proposed location for 20 destroyers equipped with the Aegis system of tracking and destroying missiles. According to South Korean Defense Minister Lee Sang-hee, “the time has come for the country to consider joining the U.S.-led global missile defense system in a strategic manner.”

Nicole ErwinNicole Erwin, a contributor to Foreign Policy In Focus, works as a journalist in Jeju.