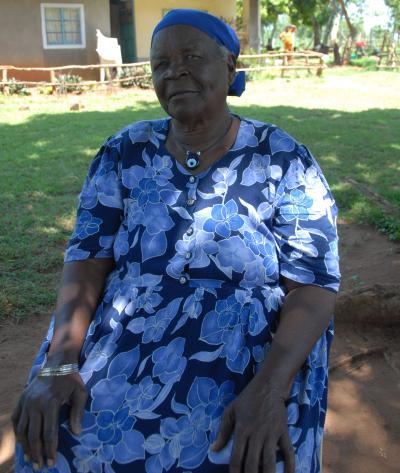 Since Senator Barack Obama became the president of the United States, visiting his paternal grandmother — “Mama Obama” — in her remote west Kenyan village of Kogelo became slightly more difficult. A small military camp had been built next to the access road to her house, and the compound is protected by a metal gate and security post.

But once formalities are taken care of and the visitor is inside, Sarah Obama, now 87 years old, is as relaxed, outspoken, and friendly as before.

“Don’t bother me with this,” she snaps at her daughter who suggests that she wear better clothes to be interviewed for my documentary film on social tragedy in west Kenya. “In the United States people don’t dress any better.”

“Before my grandson was elected, I was already involved in humanitarian activities,” she explains, fixing her Muslim headscarf. “So in a way for me personally nothing much has changed.”

Now Obama’s grandmother and her family in Kogelo run the Mama Sarah Obama Children’s Organization, which, according to her own words, aims to “give hope and a human face to the suffering orphans and vulnerable children affected by HIV/AIDS and rampant poverty.”

West Kenya is presently experiencing a humanitarian tragedy of epic proportions. Due to HIV/AIDS, droughts and unemployment, life expectancy in this part of the country dropped from 62 to 47 years over the last two decades. Adults of productive age have vanished from some villages, and very old grandparents take care of the children.

Barack Obama visited his grandmother’s house for the first time when he was 26 years old and searching for his Kenyan roots. The house is very simple and neat, the walls decorated by family photographs, many of them depicting Barack Obama’s political career.

Outside the house, in accordance with the Kenyan tradition, is a grave of Barack Obama’s father, an accomplished government economist who died in 1992 in a car accident. Two minutes’ drive from the compound is Senator Obama Korelo Secondary School. This small town in one of the poorest area of East Africa is bursting with pride for the man they consider to be one of their own.

But Mama Obama is down to earth. She’s traveled to Washington DC and elsewhere, but her roots remain at home. “Now people come here to see us. Some people want things from us, knowing that we are related to the president of the United States. But Barack Obama said repeatedly that he is not interested in helping any of these villages. He is interested in helping this entire country.”

Andre VltchekAndre Vltchek is a novelist, journalist, filmmaker, and playwright, co-founder of Mainstay Press, and a senior fellow at The Oakland Institute. A contributor to Foreign Policy In Focus, he is presently living and working in Asia and Africa. His recently published book, Oceania, is exposing Western neo-colonialism in Polynesia, Melanesia and Micronesia.