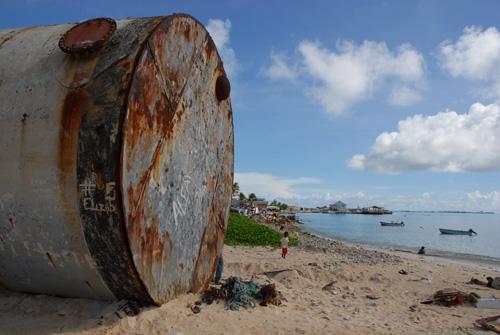 What the U.S. Army leaves behind. Photo by Andre Vltchek

Kwajalein island, a Pacific atoll in the Republic of the Marshall Islands (RMI), is a high-tech playground for those who still share Ronald Reagan’s dream of dominating space with a “Star Wars” missile defense system. The island is rimmed by rotting metal pieces of unknown origin and dotted with huge radar installations and missile interceptors. The U.S. missile defense program launches long-range missiles from California, They fly over 6,000 miles before being shot down by the interceptors. In some cases, the U.S. army allows a missile to fall into the bay as a successful “hit” on the target of the atoll’s lagoon.

“We will send the U.S. troops packing if we ever win the elections,” I was told some time ago by two rebellious Kwajelein senators, Tony deBrum and Michael Kabua. After the November 2007 elections, Senator deBrum became foreign minister but there is hardly any talk of ejecting U.S. military and civil contractors from RMI. The island chain is too financially dependent on the world’s sole superpower.

Just one mile away from the sterile military barracks of Kwajalein, the tiny island of Ebeye is unofficially called the “Slum of the Pacific.” More than 15.000 people, many of them refugees or descendants of refugees from the 15-megaton Castle Bravo nuclear test at Bikini Atoll on March 1, 1954, are crammed into 80 acres of land with inadequate medical facilities, water and electric supply, and waste management. Their traditional diet gone, they are now fully dependent on Spam, bacon, and junk food. The diabetes rate is high.

Almost all Ebeye residents depend on uncertain jobs at the U.S. base on Kwajalein, Motorized military barges shuttle the few “lucky ones” to work every morning. The military programs from Kwaj, beamed over by the U.S. Army, are the only cultural diet and source of information. Many Marshallese joined the U.S. Army, out of desperation or simply boredom. A number of them are fighting in Iraq.

The main “symbol” of Ebeye is its garbage. It is everywhere, next to the roads and on the beaches. It is the only playground for local children. This garbage includes old and rusting U.S. military and transportation equipment as well as “you don’t ask, we won’t tell” metal containers like the one in the photograph.

Andre Vltchek is a novelist, journalist, filmmaker, and playwright, editorial director of Asiana Press Agency (www.asiana-press-agency.com), co-founder of Mainstay Press (www.mainstaypress.org), and a senior fellow at The Oakland Institute. A contributor to Foreign Policy In Focus (www.fpif.org), he is presently living and working in Asia and South Pacific and can be reached at: andre-wcn@usa.net