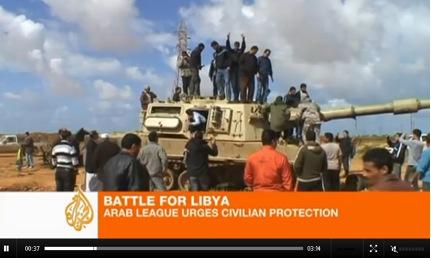 What goes around comes around with arms exports, as the war in Libya demonstrates.
By Paul Mutter | April 13, 2011 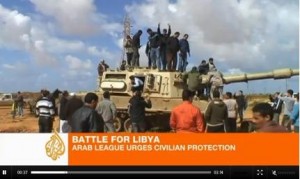 Sixty years after the conclusion of World War II in North Africa, destroyed European weaponry once again litters Libya’s coastal roads as the civil conflict there enters its second month.

But Europeans are not fighting on the ground in the former Italian colony. Rather, their arms are. In Libyan hands, European-made arms are part of a proxy battle that demonstrates the unintended consequences of the international arms trade.

The image above is a screenshot of a Libyan army vehicle destroyed outside of Benghazi by the United Nations on or around March 21, 2011. The vehicle is an Italian-made “Palmaria” self-propelled howitzer. Al Jazeera reported that this vehicle was part of the Libyan army laying siege to the Libyan rebels in Benghazi.

The siege, in which Libyan heavy weapons reported fired on civilians, was one of the justifications for the ongoing UN intervention in Libya.

Libya ordered 210 of these vehicles from Oto Merala, an Italian defense contractor. Libya is believed to possess 160 Palmarias from this order, which was not fulfilled because of UN sanctions imposed on Libya in 1992 over the Lockerbie Bombing investigation.

Until 2004, international law prohibited arms deals with Libya. Oto Melara, and other companies, adhered to this embargo.

But times changed. A thaw in Western-Libyan relations came in 2004, when the regime disclosed its nuclear program and assisted in the international sting to dismantle the A. Q. Khan network selling nuclear expertise and materials to non-nuclear states. This thaw led to the lifting of the 1992 arms embargo in 2004.

Since then, EU members have engaged in new multi-million Euro arms deals with Libya. Since 2004, Italian companies (including Oto Melara, now part of the Finmeccanica Group) signed contracts with the Libyan government of Muammar Qaddafi totaling $153.2 million. They are by no means alone, though. French, German, Belgian and UK firms have all signed deals with the regime as well since 2004.

Other weapons sold to Libya prior to the conflict by these other EU members includes: riot gear, attack helicopters, small arms and surveillance/jamming equipment.

Neither the UN nor Italy has officially confirmed that Oto Melara’s Palmarias have been deployed by the Libyan army in the present conflict. If so, however, Oto Melara – and the Italian government, which supports the UN “no-fly zone” – will face some awkward questions over their arms deals with Libya as this conflict continues.

Paul MutterPaul Mutter is a graduate student at the Arthur L. Carter Journalism Institute at NYU and a contributor to Foreign Policy In Focus.