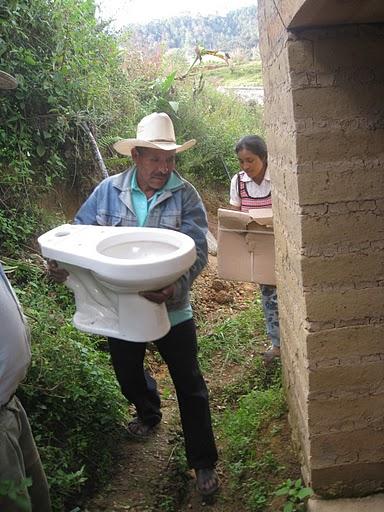 In rural Mexico, the flush toilet is a human rights victory.
By Daniel Moss | October 25, 2010 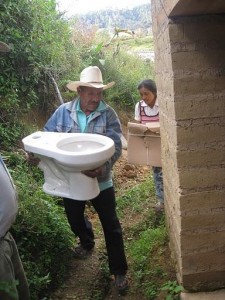 Ten Mixteco men led me across a stream and through a cornfield on a toilet tour of Mini Numa. At each adobe hut housing a shiny white flush toilet, I snapped a photo of a contented owner. In recent years, six children had died in this small village from diseases rooted in poverty and lack of sanitation. With the support of the human rights organization, Tlachinollan, the Mini Numa community had forced the hand of the government to support the right to health.

The sad normal in Mexico is that indigenous communities like Mini Numa are ignored and/or openly disparaged. Winning a health clinic was one reason why Tlachinollan’s Director, Abel Barrera Hernández, recently won the 2010 Robert F. Kennedy Human Rights award. The award honors courageous and innovative human rights defenders across the globe.

When I met Abel, he was elated not because of the prize but because of another recent court decision. He was on his way to Mexico City from Guerrero to give a press conference about the ruling of the InterAmerican Court of Human Rights in favor of two indigenous women. Eight years after having been raped by soldiers, the Court decided in favor of the Me’phaa women, Inés Fernández Ortega y Valentina Rosendo Cantú.

“It’s about time,” Abel said. “Here is a case where soldiers accused of raping indigenous women – who are seen by some as nothing more than pack animals, than burros – will face punishment. We didn’t get everything we presented to the Court but we won a lot. The ruling also requires the Mexican government to establish mechanisms of civilian oversight of the military.” At a time when the United States is emboldening the Mexican military in the drug war, Abel considers it critical to place controls on the military and put a stop to its impunity.

The court ruling also makes Abel a little nervous. The military will likely react to this slap, and an angry military is a dangerous military. Weeks before this meeting, after a two-year campaign, Tlachi won the release of Me’phaa leader, Raul Hernandez, a leader of the Me’phaa Indigenous Peoples Organization (OPIM) who had been jailed on false charges. In apparent reprisal, soldiers harassed Ines Ortega’s daughter, taunting her with her link to Raul Hernandez. Currently Tlachinollan is mulling whether to reopen a regional office in the highly conflictive zone of Ayutla, the geographic center of OPIM. It may not be safe for community members to visit the office to denounce abuses against them nor for Tlachinollan’s lawyers and human rights defenders to staff it. On the other hand, the recent victories have attracted national and international attention – Amnesty International has given the rulings some excellent visibility. It may be an opportune moment to go on the offensive. These are moves that Abel must weigh with the communities and his staff.

As far as I can tell, these communities’ aspirations are not terribly radical. They want a fair share of the commons, basic services and resources with which to scrape out modestly improved lives. But these assertions of dignity, no matter how mundane they may appear, are a slippery slope, deeply threatening to local politicians and their goons who enjoy the plunder opportunities offered by despotic control. Take the precedent of a health clinic and toilets, for example.

Neither the municipalities nor the state and federal governments much appreciated being sued to guarantee health and sanitation to indigenous communities. The domino principle is alive here; upstarts that win small gains might very well take next steps – better schools, paved streets, a share of jobs, who knows what may follow?

Roberto Gamboa is the man responsible for installing the toilets. He’s a Mexico City transplant, a child of the student uprisings in the 1960s and 1970s, who lives out his political commitments working for indigenous rights. It doesn’t matter that he can’t speak a word of Mixteco. With a cigarette hanging from his lip, wrestling with a ceramic basin to get it to sit flush over a waste tube, he doesn’t seem to feel the rough cement grinding into his knees. The community has done so much digging and cement pouring, he said; he’s happy to do the plumbing. Sucking down another cigarette, he sips yet another strawberry soda he is offered as a gesture of thanks. Sleeping on the school floor, he is so immersed in local work that he didn’t know that Mexico had recently signed onto a UN resolution guaranteeing the right to water and sanitation. But he looked forward to using it as an organizing tool as other communities consider how to stem diarrhea and infant mortality.

Roberto had posed an open question to the community – what sort of waste system do you want? Debate was long and deliberate – flush toilets versus composting latrines. Community members visited examples of the latter; some were stinky and others weren’t used for their stated purpose but rather to store clothes and farm tools. Roberto explained the flushers’ inherent water wastefulness and likely high maintenance. As a first step, he asked them to research water availability. The investigation found enough water – Mini Yuma sits in a high valley with considerable rainfall and abundant springs. Flush toilets it was, with little ecological downside.

Abel arrives soon in the United States to receive the human rights prize. He will visit Capitol Hill to describe the human rights and ecological violations of the drug war and ask members of Congress to withdraw support to the Mexican military. Roberto will dirty his fingers in Mini Yuma’s eroded soils, offering training in agroecology so that fatter corn ears might prevail. The Mixtecos and Me’phaas will work their plots of land and fortify the organizations that help them defend their rights and commons, hoping to keep their children from migrating north and the military out of their hair.

Daniel MossDaniel Moss is the coordinator of Our Water Commons and a contributor to Foreign Policy In Focus.