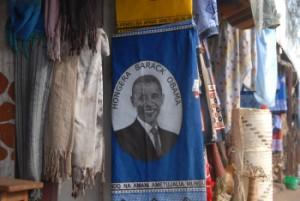 Barack Obama is the president of the United States. But many people around the world view him as their president too.
By John Feffer, Andre Vltchek | April 24, 2009 King Dodge is an angry man. The poet and owner of an art gallery in the dirt-poor village of Ngecha — 20 miles from Nairobi — he raves about injustice in his land. He is still incensed over tribalism and the horrors of last year’s riots and the indiscriminate killing of more than 3,000 people.

But even Dodge has a soft spot for the new U.S. President, Barack Obama. “I wrote a poem especially for him,” he explains, handing me a two-page printout that addresses all grievances faced by Kenyans. “I don’t know whether he will ever read it, but here it is — I had to write it just for him.”

T-shirts with Mr. Obama’s smiling face are sold at the local markets, and his portrait grins from the artwork in local galleries. Thanks to Photoshop, his finger points accusatively from the front pages of local newspapers at misbehaving local politicians. He is admired and loved, and expected to save Kenya. And there’s no use explaining that the White House does not consider Africa its priority; after all, Obama’s envoys recently helped save the political coalition of Kenya’s prime minister and president, two men from rivaling tribes.

“Mr. Obama is our pride and hope,” proclaims Harrison Ouko, a UNESCO driver who used to work with Obama’s father when he served as a government economist. In the meantime the local UNESCO staffers, who also belong to the Luo tribe, proudly exhibit photos of Obama on the tables and walls or their offices. After all, he is their president too.

John Feffer, Andre VltchekAndre Vltchek is a novelist, journalist, filmmaker, and playwright, co-founder of Mainstay Press, and a senior fellow at The Oakland Institute. A contributor to Foreign Policy In Focus, he is presently living and working in Southeast Asia and East Africa, and can be reached at: andre-wcn (at) usa (dot) net.