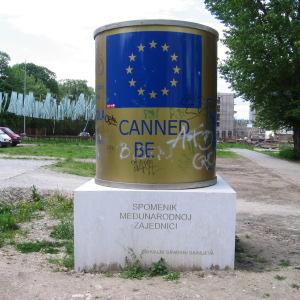 A new monument in Sarajevo playfully bites the hand that fed the city during the Bosnian war.
By John Feffer | May 5, 2008 During the nearly four-year siege of Sarajevo, the inhabitants of the Bosnian capital received thousands of cans of food from the international community. The shipments helped keep the city alive. So it is perhaps not surprising that Bosnian artist Nebojsa Seric Soba would construct a Monument to the International Community in the form of a huge, round tin of canned beef.

But this homage to Andy Warhol’s Pop Art cans of soup, which was erected last year along the river that cuts through Sarajevo, is no simple monument. It doesn’t perform the monument’s conventional function of celebrating the person or object on the pedestal. The cans of food sent to Bosnia were often long past their expiration date. The contents tasted terrible. “It was like pet food, except the dogs and the cats would not even eat it,” says Bosnian curator Dunja Blazevic. Food poisoning was not uncommon.

The international community in fact failed Bosnia in many ways, and not just in the quality of the food shipments. From 1992 to 1996, the longest siege in modern history took the lives of 10,000 people, destroyed much of the ancient town, and robbed Sarajevo of many priceless treasures – and the international community did little or nothing to restrain the Serbian forces that maintained the siege. Even the media attention paid to Sarajevo increased the Bosnian government’s reluctance to force a lifting of the siege – for fear of losing the leverage of public opinion. Meanwhile, the inhabitants of the city had to make do with the scrapings from the international community’s plate.

This take-it-or-leave-it approach continues. “We knew that we had nothing better to eat and that there was no choice possible for us,” Seric Soba observes. “The political aid we have received from the West is the same as the one we received as food: mysterious in content and with unknown ingredients, by mysterious manufacturer, and with an undetermined period of validity.”

Seric Soba’s monument is the culmination of a three-part investigation of public monuments sponsored by the Sarajevo Center for Contemporary Arts (SCCA) and its director Dunja Blazevic. In the first round, two young artists Kurt and Plasto addressed a set of empty pedestals in the city’s Liberation Square, which featured eight Bosnian writers that the Bosnian government removed for safekeeping during the war. Perhaps uncomfortable with the multiethnicity of this group of writers, the government didn’t restore the busts after the war. In November 2001, to provoke a discussion of public space and who owns it, Kurt and Plasto put busts of their own heads on the pedestals. Eventually, with the help of the SCCA, the original sculptures returned to their perches.

In the second part of the project, artists and thinkers addressed the very problem of monuments in former Yugoslavia, both the existing pieces of public art (such as commemorations of World War II battles or glorifications of leaders like Tito) and the ones that have not been built (such as a monument in Belgrade to the victims of the Yugoslav wars).

Out of this deconstruction of monuments came, finally, a new approach: the anti-monument. Seric Soba’s work, one of three winning entries in the SCCA competition, is double-edged in a way that monuments are not supposed to be. His can of beef neither celebrates nor fully condemns. It acknowledges the help of the international community even as it playfully bites the hand that fed Sarajevo.